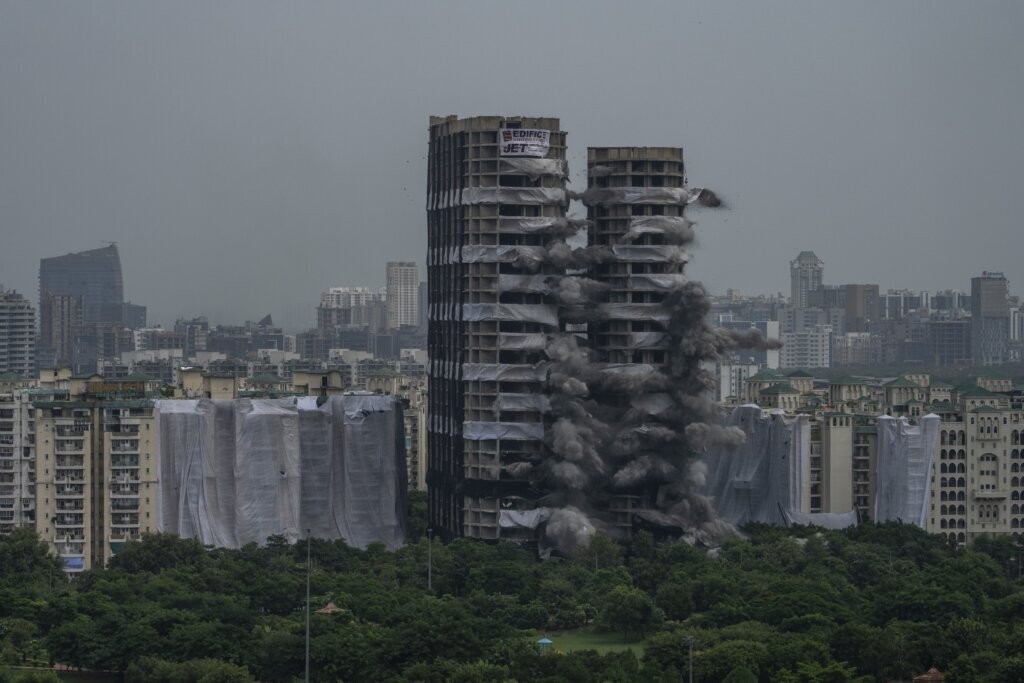 NEW DELHI (AP) — Two high-rise apartment towers in India were leveled to the ground in a controlled demolition on Sunday after the country’s top court declared them illegal for violating building norms, officials said. They became India’s tallest structures to be razed to the ground.

More than 1,500 families vacated their apartments in the area more than seven hours before the nearly 100-meter- (328 feet) tall towers crumbled inward by the impact of the implosion. The 32-story and 29-story towers, which were being constructed by a private builder in Noida city on the outskirts of New Delhi, were yet to be occupied.

“Largely, everything is OK,” said Ritu Maheshwari, a government administrator, after the demolition. “It happened as expected.”

The demolition was completed within seconds but followed a 12-year court battle between residents in the area and the builder, Supertech Limited.

The razing of the towers occurred after the Supreme Court found that the builder, in collusion with government officials, violated laws prohibiting construction within a certain distance from nearby buildings.

The Supreme Court said the construction of the two towers also was illegal because the builder did not receive mandatory consent from other apartment owners in the area.

Ahead of the demolition, the towers were surrounded by scaffolding, fences, barricades and special covers to block dust from the approximately 88,000 tons of debris that would be generated, officials said. Disposing all of the debris will take three months.

Residents are expected to return to the area Sunday evening after experts examine the impact of the demolition. Some apartments are located just nine meters (29.5 feet) away from the blast site, and the required safe distance is 20 meters (65.6 feet).

“It would come in the top five demolitions in the world in terms of height, volume, steel and tightness of the structure,” said Utkarsh Mehta, a partner with Edifice Engineering, which brought down the building in collaboration with Jet Demolition from South Africa at a cost of 180 million rupees ($2.25 million).

Mehta said 3,500 kilograms (7,716 pounds) of explosives were drilled into thousands of holes in the columns and shears of the towers. Experts used the waterfall method of demolition in which one story collapses on the next.

Joe Brikmann, director of Jet Demolition, said earlier he was confident no harm would come to the buildings adjacent to the demolished towers.

“The buildings in this area are in a high seismic zone (zone IV) and built to experience earthquakes which are much stronger than vibrations from an implosion. We are confident that the implosion of the towers will not cause any damage to properties,” The Times of India newspaper quoted him as saying.

The tallest building demolished in the world with explosives to date was 165 meters tall (541 feet), and occurred in Abu Dhabi, United Arab Emirates on Nov. 27, 2020, according to Guinness World Records.