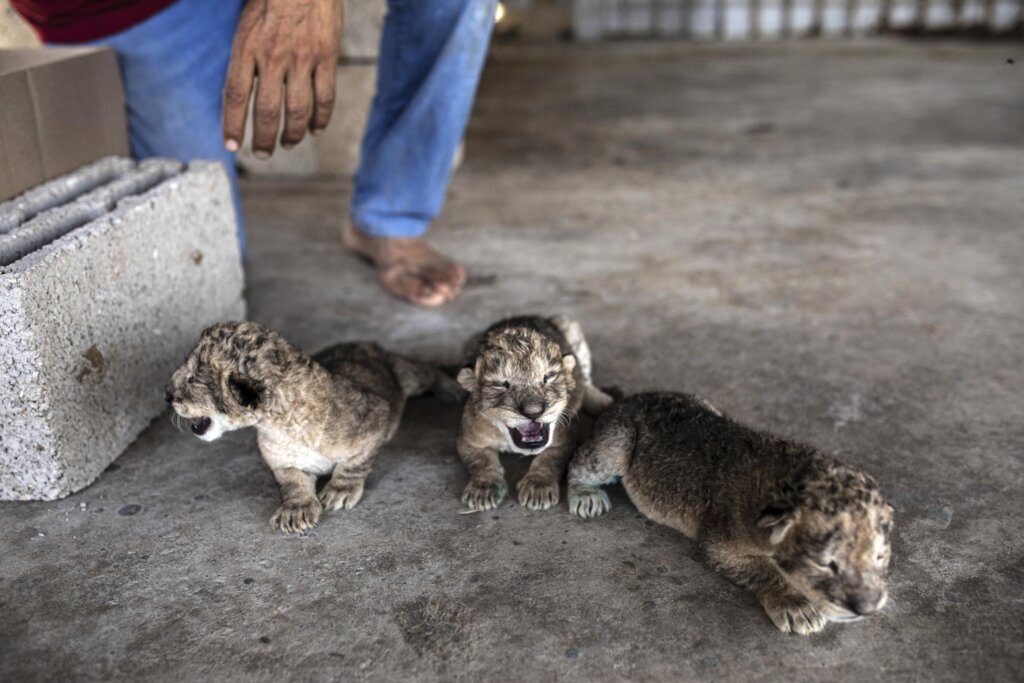 GAZA CITY, Gaza Strip (AP) — Three day-old lion cubs were on display Saturday in a cardboard box at a…

Veterinarian Mahmoud al-Sultan said each cub weighed about 700 grams. He said he felt lucky the birth was successful despite the deafening sound of constant explosions during three days of fighting. The cubs’ mother had suffered miscarriages in the past, said al-Sultan.

Loud noise “causes stress to the wild animals, especially the lions, whose roars get higher, and they keep moving in a circular way inside the cage,” he said.

The cubs were born on Friday, several hours apart, and five days after an Egyptian-brokered cease-fire halted the fighting between Israel and Islamic Jihad militants. Forty-nine Palestinians, including 17 children, were killed and several hundred were injured in the fighting.

Shocks from war aren’t the only threat to animals. Gaza is impoverished, with double-digit unemployment, largely as a result of a border blockade Egypt and Israel imposed after Hamas militants took control of the territory 15 years ago.

In the past, a number of animals in small private Gaza zoos starved to death or were killed in the long-running conflict, which included four Israel-Hamas wars and countless smaller skirmishes.

International animal welfare groups carried out several evacuations to move frail lions and tigers to sanctuaries in Jordan and Africa. The costly effort to rescue animals, while some 2.3 Gazans remain largely trapped in a small territory, has also drawn criticism.

On Saturday, visitors flocked to the small Nama zoo on the outskirts of Gaza City, with children allowed to pet the newborns. Nama is operated by a private charity, putting it in a slightly better position that the small number of private zoos that often struggle to provide for the animals.

Schools organize daily trips to the zoo and the entry fee is less than $1, helping to cover costs.

The zoo also houses a variety of birds, along with monkeys, deer, foxes, wolves and hyenas.