The average office-goer in most neighbouring countries spends less on fuel than in India, shows a Business Standard analysis.


Amid news of a fuel shortage in some parts of the country and wider unrest over fuel issues in the neighbourhood, an analysis of the data from international tracker globalpetrolprices.com shows that the per litre price of petrol is higher in India than in seven out of its nine neighbours. The United States (US) has also been included for a developed nation comparison and had a higher price than India. Among the neighbouring countries, China (Rs 116 per litre) and Nepal (Rs 124 per litre) had a higher price. Every other country that borders India had lower prices, including Sri Lanka, Myanmar, Bhutan, Pakistan, Bangladesh, Afghanistan and the Maldives. All prices are in Indian rupees. The data is as of June 20.


Income differences can affect how much prices pinch the average citizen. For example, petrol in India is 2.6 per cent more expensive than in the US. However, their per capita gross domestic product (GDP) is 30 times that of India. Business Standard looked at the number of litres that the average citizen can afford to buy daily, using the per capita GDP for each country in 2022 as a broad proxy for affordability. The analysis used 2022 numbers from the Washington-based International Monetary Fund.


The GDP is the total value of goods and services that a country produces. A per capita figure breaks this down into a per person figure. Assuming the person used an equivalent amount to buy petrol, the number of litres they could afford on a daily basis shows a wide variance across the countries under consideration. 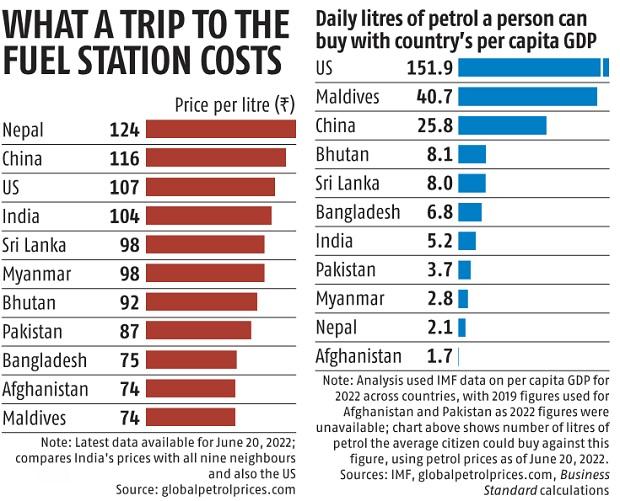 An Indian would be able to buy 5.2 litres of petrol, which is more than Pakistan, Myanmar, Nepal and Afghanistan. However, it is less than Bangladesh (6.8 litres), China (25.8 litres) and the Maldives (40.7 litres).


The US, as a developed country, can buy over 150 litres a day, if the average person spent the equivalent of their per capita GDP on buying petrol. They can afford a larger amount than India despite slightly higher prices because of higher US income. Affordability is higher in 5 out of 9 countries neighbouring India.


It is not clear how much relief can be expected in the days ahead.


Oil prices may not follow the typical price decline that is seen amid slowing growth, according to a June 21 Asia Economics (Asia Pacific) report from global financial services major Morgan Stanley. There has been a decline in non-oil commodities but this may not be true for crude, noted the report authored by Chief Asia Economist Chetan Ahya and economists Jonathan Cheung and Derrick Y Kam.


“…oil – the most important commodity that Asia imports — could decline to a smaller extent owing to geopolitical tensions and supply constraints,” it said.


The outlook could also be affected by increased demand from China, according to a June 19 Global Markets Research report from financial services group Nomura, authored by research analysts Aichi Amemiya and Robert Dent.


“The ongoing Russia-Ukraine war and its impact on global commodity markets and supply chains has shown few signs of improvement, and may have started to become more entrenched…. Retail gasoline prices in the US have risen sharply and persistently from around $3.30/gallon at end-2021 to over $5.00/gallon in June. Increased demand from the ongoing reopening of China after Omicron-linked lockdowns suggests further upside risk to energy prices,” it said.

Gina Carano responds to Ronda Rousey about potential fight: ‘It could happen’

Musk’s Twitter deal has employees asking: Should I stay or…

How to pay MCD property tax online? A step-by-step guide to the…