‘A constant in my life’: World mourns Queen Elizabeth II 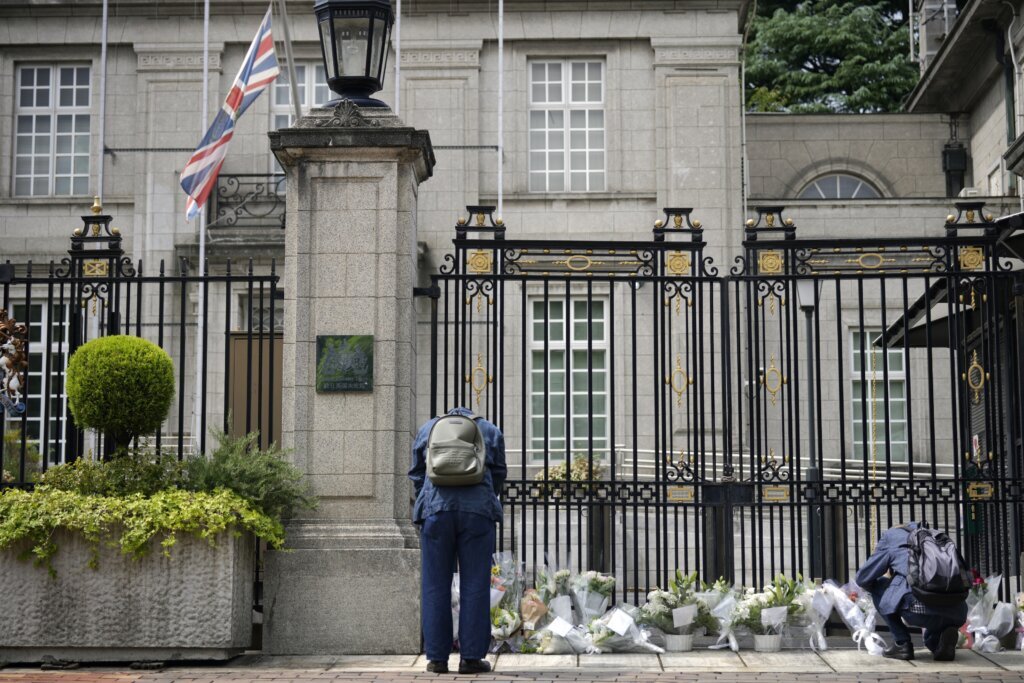 LONDON (AP) — Queen Elizabeth II was much more than Britain’s monarch. She was sovereign to another 14 nations and…

LONDON (AP) — Queen Elizabeth II was much more than Britain’s monarch. She was sovereign to another 14 nations and a rare figure on the world stage who was almost universally admired. Her reach cut through hemispheres, generations, social divisions and politics.

The widespread tributes that followed her death came not only from United States President Joe Biden but also from Russian President Vladimir Putin. They came from other monarchs, leaders, dignitaries and rock stars.

Elizabeth was Britain’s longest-reigning monarch, serving 70 years. She had been on the throne since 1952, when the nation was still rebuilding from the destruction of World War II. She became a global icon of calmness and fortitude through decades of political upheaval and social change.

She died at age 96 at Balmoral Castle, her summer residence in Scotland.

During her reign, Elizabeth met more than a dozen American presidents. President Joe Biden said he was informed of her death by senior advisers during a meeting in the Oval Office.

She was a “stateswoman of unmatched dignity and constancy who deepened the bedrock alliance between the United Kingdom and the United States,” he and first lady Jill Biden said in a statement, saying she ”defined an era.”

The Bidens later went to the British Embassy to offer condolences. “We mourn for all of you. She was a great lady,” Biden could be heard telling embassy staff.

“For many decades, Elizabeth II rightfully enjoyed the love and respect of her subjects, as well as authority on the world stage. I wish you courage and perseverance in the face of this heavy, irreparable loss,” Putin wrote.

Elizabeth was mourned across Europe. In France, Britain’s historic rival and contemporary ally, officials ordered flags at the presidential palace and public buildings be lowered to half-staff on Friday.

He said no other foreign sovereign had visited the presidential palace more often than Elizabeth, who knew all eight presidents of contemporary France.

“The woman who stood alongside the giants of the 20th century on the path of history has left to join them,” Macron said in a statement.

Mourners also gathered at the British Embassy in Paris.

“She’s been a constant in my life,” said 70-year-old Robert Miller, a London resident in Paris for a conference.

“Whilst I know she was very old, she was still doing her work until yesterday,” he said. “Like anybody’s mother, you know, even if you think things are going well, at some point the end of an era comes, and you’re very sad. “

Even in places where the relationship with British monarchy is complicated, the tributes flowed. In India, once a British colony, Prime Minister Narendra Modi called Elizabeth “a stalwart of our times.”

“She personified dignity and decency in public life,” Modi tweeted.

The queen’s death came as a growing number of British territories in the Caribbean are seeking to replace the monarch with their own heads of state amid demands that Britain apologize for its colonial-era abuses and award its former colonies slavery reparations.

Still, Caribbean leaders from Jamaica to Bermuda and beyond mourned her death.

Jamaican Prime Minister Andrew Holness said that for many years she visited the island every decade.

“Undoubtedly, she formed a special bond with the people of Jamaica,” he said. “We are saddened that we will not see her light again, but we will remember her historic reign.”

Bermuda Premier David Burt noted that her reign “has spanned decades of such immense change for the United Kingdom and the world.”

It was not only Britain that lost its queen. Elizabeth was also sovereign to 14 other countries including Jamaica, Canada, Australia, the Solomon Islands and New Zealand.

New Zealand Prime Minister Jacinda Ardern said she was awoken a little before 5 a.m. by a police officer shining a torch into her bedroom to tell her the news.

Ardern said the queen was an extraordinary woman who she’d remember for her laughter. Like many other people, she was feeling not only deep sadness but also deep gratitude.

“Here is a woman who gave her life, utterly, to the service of others. And regardless of what anyone thinks of the role of monarchies around the world, there is undeniably, I think here, a display of someone who gave everything on behalf of her people,” Ardern said.

In Canada, Prime Minister Justin Trudeau said he was having trouble believing he’d had his last sit-down chat with Elizabeth: “I will so miss those chats,” he said.

Elizabeth had visited Canada some 22 times as monarch.

“For most Canadians, we have known no other sovereign,” Trudeau said. He said she was a “constant presence in our lives — and her service to Canadians will forever remain an important part of our country’s history.”

Former Australian prime minister Malcolm Turnbull, who led a failed campaign to have an Australian president replace the British monarch as Australia’s head of state, came close to tears in paying tribute to Elizabeth.

“It’s the end of an era and let’s hope that the future, after the queen’s passing, is one where we will have leadership as dedicated and selfless as she has shown,” Turnbull told the Australian Broadcasting Corp.

Elizabeth was mourned across the 54-nation Commonwealth, a group built around Britain and its former colonies.

In Ghana, President Nana Addo Dankwa Akufo-Addo recalled Elizabeth’s visits to his country and praised “the friendliness, elegance, style and sheer joy she brought to the performance of her duties.”

“We shall miss her inspiring presence, her calm, her steadiness, and, above all, her great love and belief in the higher purpose of the Commonwealth of Nations, and in its capacity to be a force for good in our world,” he said in a statement.

At the United Nations, the Security Council stood in silent tribute at the start of a meeting on Ukraine. France’s U.N. Ambassador Nicolas De Riviere, the council president, sent condolences on behalf of its 15 members.

Elizabeth presided “over a period of historic changes both for her country and the world,” he said. “Her life was devoted to the service of her country.”

Her life “set an example for all of us and will remain as a solid and valuable legacy for future generations,” Spanish King Felipe VI said in a telegram to King Charles III.

“We will miss Her dearly,” he wrote, speaking for himself and his wife.

King Carl XVI Gustaf of Sweden called her “a constant presence, not only in British society but internationally.”

In Norway, King Harald said that for “nearly a century, Her Majesty devoted her life to the service of the Commonwealth, following the British people through good days and bad, in times of happiness and sorrow.”

The king and crown prince of Saudi Arabia also offered their condolences. Crown Prince Mohammed bin Salman said the queen was “an example of wisdom, love and peace.”

In the U.S., tributes came not only from the Bidens but also every living former president.

Barack Obama and his wife, Michelle, said she made “the role of Queen her own — with a reign defined by grace, elegance, and a tireless work ethic.” George W. Bush called her “a woman of great intellect, charm, and wit,” and Jimmy Carter said Elizabeth’s “dignity, graciousness and sense of duty” were inspiring.

Rock star Elton John paid tribute at his Toronto concert, saying he was inspired by her and is sad she is gone. “She led the country through some of our greatest and darkest moments with grace and decency and genuine caring,” John said.

Praise even came from the fictional Paddington Bear, the beloved British children’s book character. The bear shared tea with the queen in a video shown in June during her Platinum Jubilee celebrations.

“Thank you Ma’am, for everything,” said a statement Thursday on the Paddington Bear Twitter feed.

Follow all AP stories on the British royals here