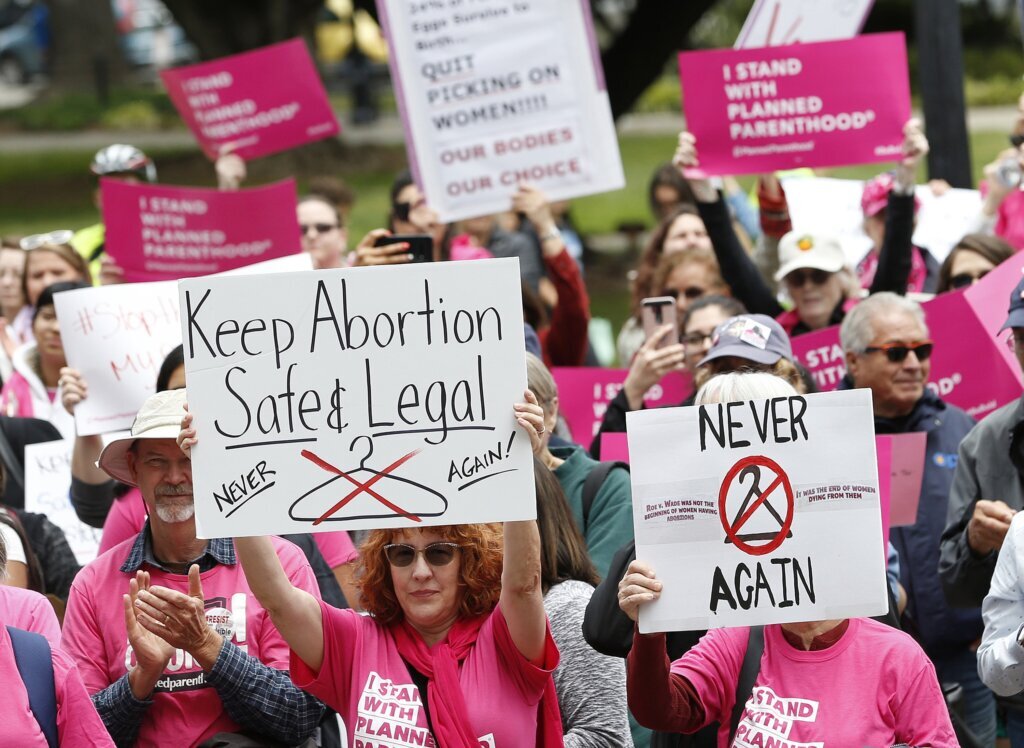 SACRAMENTO, Calif. (AP) — Planned Parenthood leaders from 24 states gathered in California’s capital Friday to begin work on a nationwide strategy to protect and strengthen access to abortion, a counteroffensive aimed at pushing back against restrictions that have emerged in more than half of the country after the U.S. Supreme Court overturned Roe v. Wade.

Their goal is to emulate the success liberals have had in California, where state lawmakers passed some of the most robust abortion protections in the country this year, culminating in a statewide election this fall that would make abortion a constitutional right in the nation’s most populous state.

California Attorney General Rob Bonta, speaking to a group of 25 leaders in a hotel conference room in Sacramento, with another 30 watching online, said abortion advocates could channel what he called the “ruthless energy” of anti-abortion advocates — “but not as a way to hurt people.”

“Anti-freedom states have been playing the long game. They have successfully led a ruthless, coordinated siege on reproductive freedom,” Bonta said. “It’s time that we play that game as well.”

But duplicating California’s results in the rest of the country won’t be easy. California’s government is dominated by Democrats who support abortion access and rushed to support new legislation this year after the court overturned the landmark 1973 decision that effectively legalized abortion nationwide.

In Washington, while Democratic President Joe Biden supports abortion, Democrats hold narrow majorities in the House and Senate — advantages that could be wiped out after the midterm elections in November.

Even if Democrats retain control of the U.S. Senate, they likely still would not have enough votes to stop Republicans from blocking abortion legislation. Democrats in the House have already voted to pass a bill that would make abortion legal nationwide, but they have been unable to get the bill past an evenly divided Senate.

“We can only get so far through our inside maneuverings. We also need your outside mobilization to rally support at the grassroots level, as you do so well,” House Speaker Nancy Pelosi, a Democrat from San Francisco, said in a video message to the group on Friday.

Jodi Hicks, president and CEO of Planned Parenthood Affiliates of California, said in an interview that one goal of Friday’s meeting was for leaders across different states to discuss what strategies have worked to protect abortion access and to create a unified blueprint in the coming months.

“We really want to learn from each other,” Hicks said.

Participants were not specific about their strategies to protect and expand abortion access during the portions of Friday’s meeting attended by a reporter for The Associated Press.

Abortion opponents also are mobilizing nationally. One anti-abortion group, National Right to Life, has proposed model legislation for states that would ban all abortions except to prevent the death of a pregnant woman. New legal frontiers could include prosecuting doctors who defy bans, and skirmishes over access to medication abortions already are underway. Others hope to get more conservatives elected in November to advance an anti-abortion agenda.

Abortion rights groups feel an urgency to act, especially with bans and restrictions in place in a majority of states. Just three months after Roe v. Wade fell, abortion access in more than half of U.S. states is considered “restrictive,” according to the Guttmacher Institute, a research group that supports abortion rights.

That includes abortion bans in 11 states, two states where abortion is prohibited after six weeks of pregnancy and nine states that limit access in other ways.

Abortion-rights leaders felt emboldened by California’s swift success in passing new abortion protections, the result of more than a year of careful planning. In the fall of 2021, Gov. Gavin Newsom formed the “Future of Abortion Council,” bringing together more than 40 state officials and abortion-rights groups to analyze the state’s abortion laws.

They produced a report with more than 45 recommendations, which became the foundation for a package of 15 bills that passed the Legislature this year. The bills make abortions cheaper for women with private insurance, create scholarships for students studying to provide abortions, let some nurse practitioners perform abortions without the supervision of a doctor and shield abortion providers and volunteers from out-of-state penalties for providing abortions.

Newsom is expected to sign most of them into law by the end of this month. In addition to the new protections, lawmakers approved $200 million in new spending that, among other things, will pay for abortions for people who can’t afford them and will cover travel expenses of women from other states who come to California for care.

Jonathan Keller, president of the California Family Council, said in a statement that other states shouldn’t follow California’s lead on expanding abortion protection.

“These policies are neither fiscally responsible nor pro-choice since they only offer to pay for abortion, not prenatal care or adoption,” Keller wrote. “Why would any other state want to prioritize abortion over and above adoption and parenting? It’s offensive to only offer financial incentives to women on the condition they end their pregnancies.”

“Five Americans who happen to sit on the Supreme Court went and told 330 million Americans that we’re going to rip away a right that you had,” U.S. Secretary of Health and Human Services Xavier Becerra told the group Friday.

Who is US Open star Casper Ruud’s girlfriend Maria Galligani?