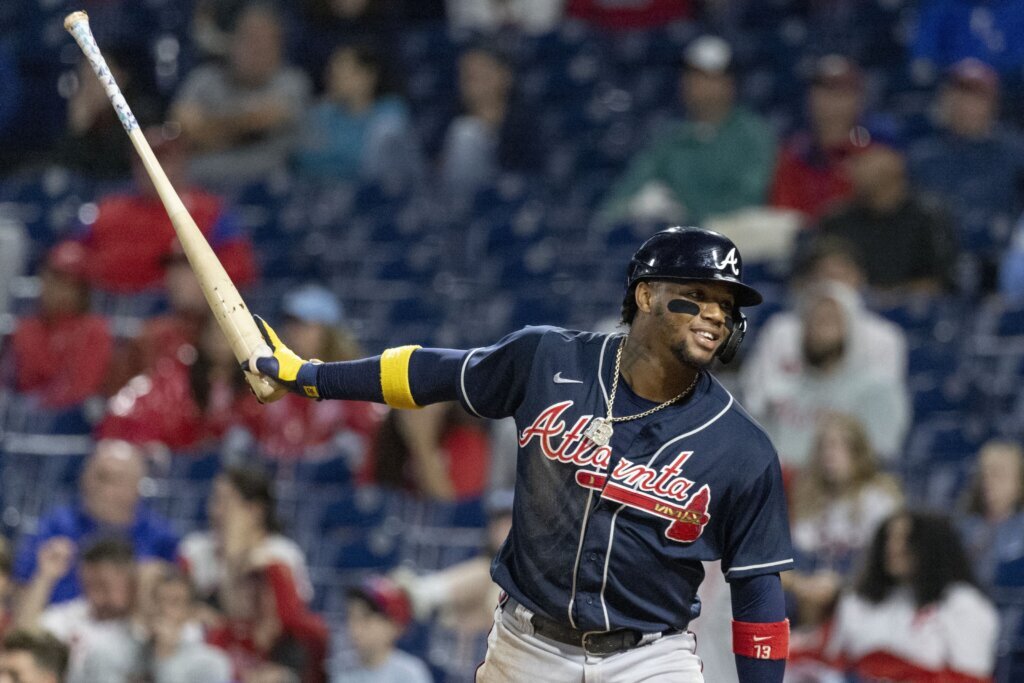 PHILADELPHIA (AP) — Ronald Acuña singled home the go-ahead run in the 11th inning and the Atlanta Braves stayed close in the NL East race, outlasting the Philadelphia Phillies 8-7 Sunday in a game that took over six hours to complete because of a two-hour rain delay.

The Braves split the four-game series and remained 1 1/2 games behind the division-leading New York Mets. They’ll play three games next weekend in Atlanta, with the Mets needing one win to secure the tiebreaker advantage of head-to-head wins.

Kyle Schwarber extended his National League-leading home run total to 42 with a pair of solo drives while scoring three times for the Phillies. Philadelphia holds a 1 1/2-game lead over the Brewers for the third NL wild card spot and a head-to-head tiebreaker over Milwaukee based on a 4-3 season series advantage.

Acuña hadn’t played since feeling back tightness before Thursday night’s series opener. He pinch-hit for Vaughn Grissom in the eighth, was issued an intentional walk and remained in the game.

In the 11th, he hit an RBI single off Andrew Bellatti (4-4) for a 7-6 lead, and later scored on a two-out single by Michael Harris II.

Jackson Stephens (3-2) pitched the last two innings, giving up an RBI single to J.T. Realmuto in the 11th.

Schwarber’s two homers came off of Braves starter Charlie Morton – a leadoff homer in the first that ticked the outside of the foul pole in right field and a liner that barely cleared the wall in left-center in the third for a 4-3 lead.

Dansby Swanson hit a two-run homer in the fourth off Phillies starter Kyle Gibson for a 5-4 lead. Swanson had three hits and three RBIs.

With the rain pouring down across Citizens Bank Park in the fifth, both Bryce Harper and Alec Bohm lifted sacrifice flies for a 6-5 lead, just before the tarp came out for 2 hours, 9 minutes.

The score remained that way until the eighth when Phillies reliever David Robertson uncorked a two-out, bases-loaded wild pitch that scored William Contreras with the tying run.

Phillies: Placed LHP Brad Hand on the 15-day injured list with left elbow tendinitis retroactive to Sept. 22. In his place, RHP Chris Devenski was selected from Triple A Lehigh Valley and INF Johan Camargo was designated for assignment.

Braves: After visiting the White House on Monday morning to celebrate their 2021 World Series title, the Braves will start a three-game series at the Nationals on Monday evening. Atlanta has not announced its Monday starter.

Phillies: After an off-day Monday, the Phillies begin a 10-game road trip that will conclude the regular season in Chicago. RHP Zack Wheeler (11-7, 2.98 ERA) will start against the Cubs on Tuesday.