Adani group overtakes Tatas to be India’s most valued conglomerate


Gautam Adani’s red-hot streak on Dalal Street continues with his group of companies overtaking the ones under the Tata umbrella to become India’s most valuable conglomerate.


The market value of the Ahmedabad-based group is for its nine listed firms starting with the family name Adani and also for the Ambuja Cements and ACC.


The gap between Mukesh Ambani and Adani has widened by 40 per cent. Ambani, with $91 billion net worth, is ranked eighth in the world.


Adani group stocks have been on a tear this year, with the share prices of four companies more than doubling — Adani Power is up 3.9 times, followed by Adani Transmission, which is up by 2.4 times, even in a weak and volatile market backdrop. On other hand, RIL has gained 5.5 per cent and TCS has declined nearly 20 per cent. 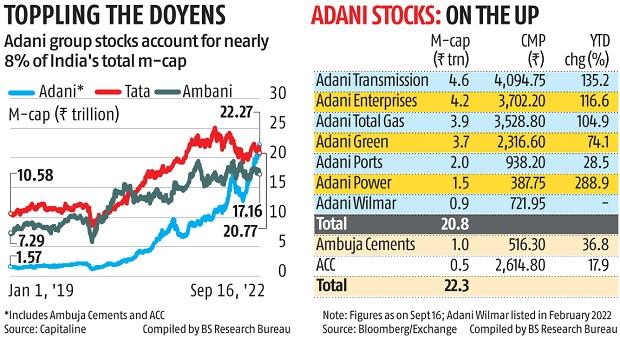 The meteoric rise in shares of Adani companies has been largely on account of valuation expansion and not so much on the back of earnings growth. Stocks like Adani Total Gas and Adani Green trade at over 700 times their earnings, while Adani Enterprises and Adani Transmission at more than 400 times.


By comparison, RIL and TCS command a price-to-earnings (PE) multiple of less than 30 times. This is despite the annual revenues of seven Adani firms being only a fraction of those of RIL and the combined top line of the listed Tata Group companies.


The combined revenues and net profits of Ambuja and ACC were Rs 29,900 crore and Rs 2,780 crore, respectively, for CY2021. Their acquisition is expected to add 15-20 per cent to Adani Group’s combined earnings in FY23.


Starting his business journey as a trader from Ahmedabad, Gautam Adani, the 60-year-old founder of the group, diversified rapidly into various businesses. The group’s first major infrastructure project was a sea port in Mundra in Gujarat.