On Wednesday, the company’s scrip on BSE closed 3.5 per cent higher to Rs 340 a share. 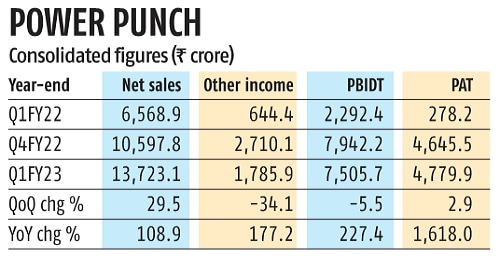 “We have been able to utilise the opportunities presented by the market, to meet rising power demand. Regulatory issues that were outstanding since long are nearing full resolution,” Anil Sardana, managing director, Adani Power, said.


In Q1, Adani Power and its subsidiaries achieved an average plant load factor of 58.6 per cent and aggregate sales volumes of 16.3 billion units (BU) on an installed base of 13,650 mega watts, it said.


Part of the diversified Adani Group, APL is the largest private thermal power producer in India.


The company has an installed thermal power capacity of 13,610 MW spread across seven power plants in Gujarat, Maharashtra, Karnataka, Rajasthan, Chhattisgarh, and Madhya Pradesh, apart from a 40 MW solar power plant in Gujarat.

‘Offer for sale’ mechanism to get mega boost as Sebi…

Can reducing ‘state-litigation’ solve half of the…