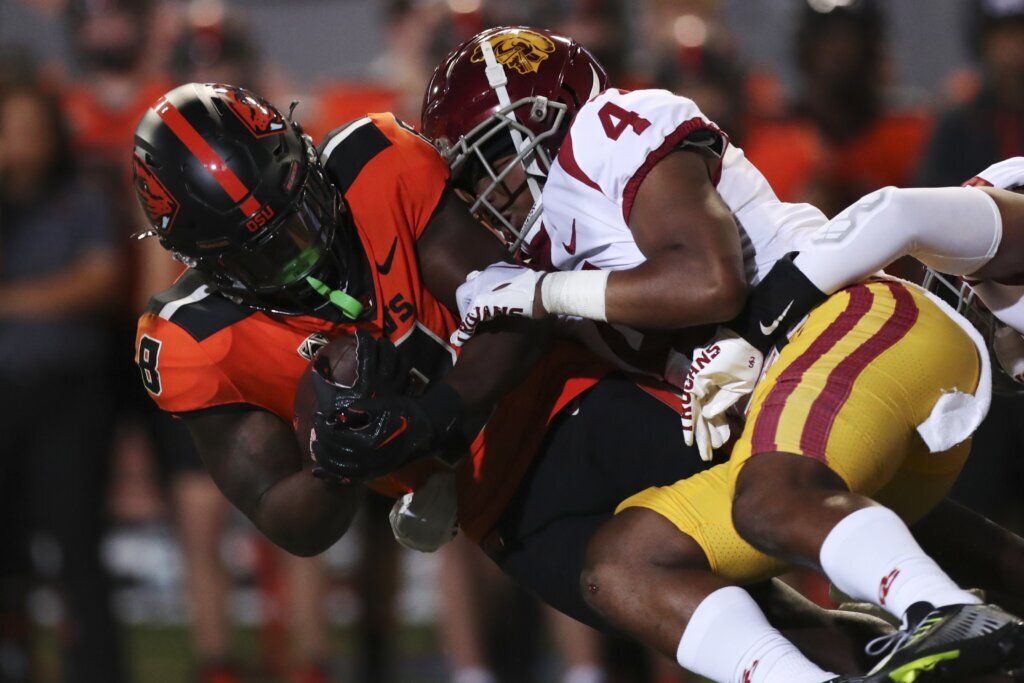 CORVALLIS, Ore. (AP) — Jordan Addison caught a go-ahead 21-yard touchdown pass with 1:13 left and No. 7 USC overcame a shaky performance for a 17-14 victory over Oregon State on Saturday night.

The Beavers, vying to start 4-0 for the first time since 2012, took the lead on Jam Griffin’s 18-yard touchdown run with 4:41 remaining. But USC quarterback Caleb Williams led an 11-play, 84-yard drive that ended with Addison’s sixth touchdown catch of the season.

The Trojans (4-0, 2-0 Pac-12) did not look like the team that dominated its first three opponents with 40 or more points per game. Williams threw for a season-low 180 yards. Addison, the 2021 Biletnikoff Award winner who transferred from Pitt, caught three passes for 42 yards.

Deshaun Fenwick’s 4-yard touchdown run put the Beavers up 7-0 early in the second quarter. It was his fourth TD of the season.

Oregon State appeared headed back to the end zone but Nolan was intercepted by Erik Gentry. The Trojans capitalized, going 41 yards on seven plays and finishing with Lynch’s 42-yard field goal to narrow it to 7-3 at halftime.

Kitan Oladapo sacked Williams on third down for a loss of 11 yards, stalling a USC drive on the Oregon State 45 and forcing a punt.

But USC answered. Nolan was intercepted by Ceyair Wright, who ran it back to the Oregon State 26. The Trojans finished the drive with Travis Dye’s 7-yard scoring run to put USC back in front 10-7.

Oregon State was called for a pair of penalties on the ensuing drive and Everett Hayes’ 46-yard field goal attempt to tie it with 8:34 to go went right.

Oregon State benefited with good field position from USC’s punt out of the end zone, and Griffin rushed 18 yards for a touchdown that gave the Beavers back the lead with 4:41 to go.

After Addison’s touchdown catch, the Beavers’ final drive ended with another USC interception.

Dye, a transfer from Oregon, caught 19 passes for 136 yards and a score.

USC: The Trojans had scored on their opening drive in the previous three games this season. They had not trailed in a game until Saturday. … USC’s second-half kickoff went out of bounds.

Oregon State: The Beavers were without tight end Luke Musgrave, who led the team with 169 yards receiving through the first two games, because of an unspecified injury. There is no timetable for his return. … Oregon State went to the Coliseum last year and beat the Trojans 45-27. It was the Beavers’ first victory at USC in more than 60 years.

Oregon State: The Beavers visit No. 13 Utah next Saturday.