Ten Hag, who quit the Amsterdam club in the summer, helped new team Manchester United to a 2-1 win over Liverpool last month.

And now Schreuder, 49, who has arrived from Club Brugge, also hopes to topple Jurgen Klopp’s Reds like United.

The Dutchman, Ten Hag’s assistant for 18 months before joining Hoffenheim in 2019, said: “I have looked at the United match and what they did.

“There are certain things they did that are applicable to us.

“You have to be good with the ball against these kinds of teams. You need to have guts and courage. Courage is key. If you have that, then you have a chance.” 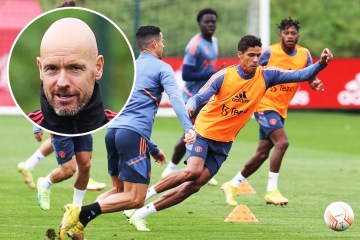 Schreuder fears a Liverpool backlash following their 4-1 loss in Napoli.

He said: “I think Klopp is just going to ask the players to play in a defensive way better than they did last time. Managers admit if you haven’t played well.

“We expect to go into a storm. We are also good. We try to play our own game. You have to have courage and tomorrow, if we can do that, we have a chance.

“If you don’t have it, it is going to be difficult, especially one on one.”

Ajax, who reached the Champions League semi-final in 2019 and the last-16 last season, are top of the Dutch Eredivisie and have kept clean sheets in each of their last five games despite losing a host of stars including Antony and Lisandro Martinez to United.

Schreuder added: “Ajax have shown in the last years we can compete at this level.

“It’s a big compliment for the people here at Ajax to get a strong squad again.

“We signed a few players and some young players have come in, which fit into the Ajax system. It gives us new energy.”

Cardinals have to improve in a hurry after dreadful Week 1