In a move that signals the succession of the third generation of the Ambani family, Mukesh Ambani has stepped down as the director of Reliance Jio Infocomm (RJIL), handing over the reins to son Akash, who will take over as the chairman of the firm.

In a stock exchange filing, Reliance Jio Infocomm on Tuesday said its board approved the appointment of Akash Ambani, non-executive director, as chairman, at a meeting held on Monday.

The transition, which comes ahead of an anticipated initial public offering (IPO) of Jio Platforms, could also see Akash’s twin sister Isha take on a greater role in RIL’s retail business, housed under Reliance Retail.

While this is the first instance of billionaire Mukesh Ambani taking the backseat, he will remain involved in overseeing the digital businesses. He is the chairman of Jio Platforms, the flagship company that owns all of Jio’s digital service brands, including RJIL. Marquee investors such as Facebook and Google, private equity firms, and sovereign wealth funds who pumped in over Rs 1.5 trillion in the company in 2020 are also shareholders in Jio Platforms, in which Reliance Industries (RIL) has a majority stake.

Thirty-year-old Akash is an economics graduate from Brown University in the US, and has been involved with Jio since its inception. He is also a board member of Jio Platforms.

According to company officials, Akash was closely involved with the launch of the JioPhone in 2017. The handset helped the company grow its customer base, especially in tier-II and III markets.

With over 410 million subscribers, Jio is the largest mobile service provider in India.

Jio Infocomm accounts for over 90 per cent of revenue and Ebitda (earnings before interest, taxes, depreciation, and amortisation) of Jio Platforms and includes its mobile and fibre (broadband) segments. 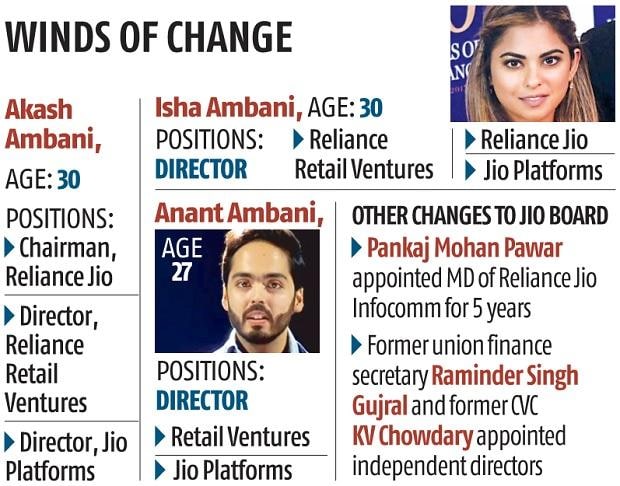 Akash has also been instrumental in the company’s acquisitions in the digital space and the development of new technologies such as artificial intelligence (AI) and blockchain.

Over the past few years, Jio Platforms has made 14 acquisitions in areas such as music streaming (Saavn), edtech, digital health care, conversational AI, drone-based solutions, mixed reality, simulation software, and augmented reality, among others.

Analysts said the transition was expected and the next step would be unlocking the value of the digital and retail businesses through IPOs.

“Akash has been involved in the business for a long time. It (his appointment as Jio Infocomm chairman) combines value creation, IPO preparation, and succession planning. There are talks about demergers, and I think those processes are going on,” said Vikas Khemani, founder, Carnelian Asset Management.

Geetanjali Kedia, senior research analyst of SP Tulsian Investment Advisory Services, said it was clear that the company was giving shape to the succession since Jio and the retail verticals have scaled up. “Since RIL is the mother company with a complex cross-holding structure, streamlining the business is called for and a well-charted succession plan, unlike the previous time, is the right way forward. The next generation is anyways already being groomed for larger roles, making ownership and control change only a matter of time,” she said.

Though the announcement was made after market hours, RIL’s shares closed at Rs 2,529 apiece on the BSE, up 1.5 per cent over the previous close.

Market experts said, though, that there may not be an immediate impact of Tuesday’s move on RIL’s share price. The stock might not rerate significantly because the valuation of Jio Platforms has been established by many investors, said Khemani.

“The IPOs of Jio and Reliance Retail will be the next logical steps. Value unlocking will happen after the IPOs of the digital and retail businesses,” Kedia added.

A smooth succession is important for all stakeholders, considering the feud of the mid-2000s when Mukesh and younger brother Anil Ambani parted ways after the death of their father Dhirubhai Ambani.

Meanwhile, the RJIL board also approved the appointment of Pankaj Mohan Pawar as managing director, and Raminder Singh Gujral and KV Chowdary as independent directors for a period of five years starting June 27, subject to shareholders’ approval.

A timeline of the Jeffrey Epstein, Ghislaine Maxwell scandal

5 NFL teams that regretted making a change at QB