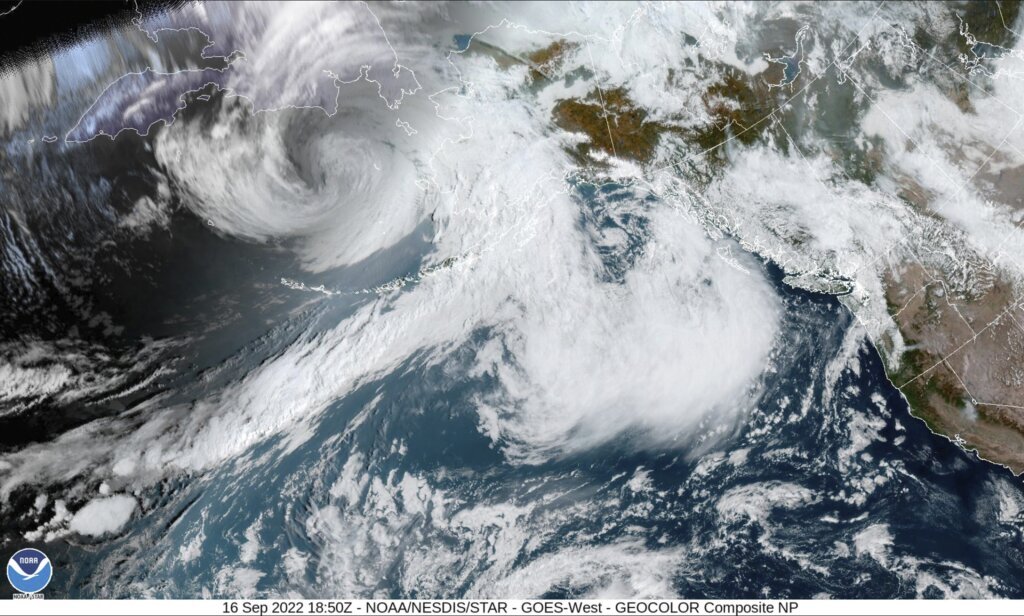 JUNEAU, Alaska (AP) — Residents on Alaska’s vast and sparsely populated western coast braced Friday for a powerful storm that forecasters said could be one of the worst in recent history, bringing with it hurricane-force winds and high surf that could knock out power and cause flooding.

The storm is the remnants of what was Typhoon Merbok, which University of Alaska Fairbanks climate specialist Rick Thoman said is also influencing weather patterns far from Alaska — a rare late-summer storm now is expected to bring rain this weekend to drought-stricken parts of California.

“All this warm air that’s been brought north by this ex-typhoon is basically inducing a chain reaction in the jet stream downstream from Alaska,” he said.

“It’s a historic-level storm,” Thoman said of the system steaming toward Alaska. “In 10 years, people will be referring to the September 2022 storm as a benchmark storm.”

Hurricane-force winds were forecast in parts of the Bering Sea, while in the small communities of Elim and Koyuk, around 90 miles (145 kilometers) from the hub community of Nome, water levels could be up to 18 feet (5 meters) above the normal high tide line, according to the National Weather Service. Flood warnings were in effect until Sunday in some areas.

In Nome, which has about 3,500 residents, Leon Boardway was working as usual Friday at the Nome Visitors Center, a half-block from the Bering Sea. “I just want to keep my door open and the coffee pot on,” he said after it had begun to rain and the winds picked up.

But few people were coming by. Residents, visitors and businesses in the town, famous for being the end of the Iditarod Trail Sled Dog Race and the setting for the dredging-for-gold reality show “Bering Sea Gold,” were boarding up windows and otherwise preparing for the storm.

“The ocean is getting worse out there,” said Boardway, 71, as he checked out the center’s webcam, which from its high perch has a good view of the swells.

“I hope everybody stays calm and everybody just gets in a good, safe position,” he said.

Typhoon Merbok formed farther east in the Pacific Ocean than where such storms typically appear. Water temperatures are unusually warm this year so the storm “was able to spin up,” Thoman said.

Meanwhile, a low-pressure system was expected to drop from the Gulf of Alaska and park off the coast of Northern California, producing gusty ridgetop winds before rains set in late Saturday, the National Weather Service said.

In the Sierra Mountain foothills northeast of the state capital of Sacramento, fire crews have been fighting what has become the largest wildfire in that state so far this year. While rain is needed, the storm was predicted to also bring winds that could spread the Mosquito Fire.

The storm will slow but not end California’s fire season because fuels are critically dry and a period of warmer, drier weather will follow, said Courtney Carpenter, a National Weather Service meteorologist.

Forecasters said the weather system will spread rain down the state’s central coast but little if any is expected in most of Southern California, where mountain and desert communities are dealing with the aftermath of too much rain.

Crews were clearing head-high mud flows in the San Bernardino Mountains east of Los Angeles, and searching for a person missing since flash-flooding Monday that was caused by downpours from remnants of a Pacific hurricane that swirled into Southern California with winds topping 100 mph (160 kph) last weekend.

The deluges added to road and infrastructure damage in desert national parks from the summer’s punishing monsoonal thunderstorms.