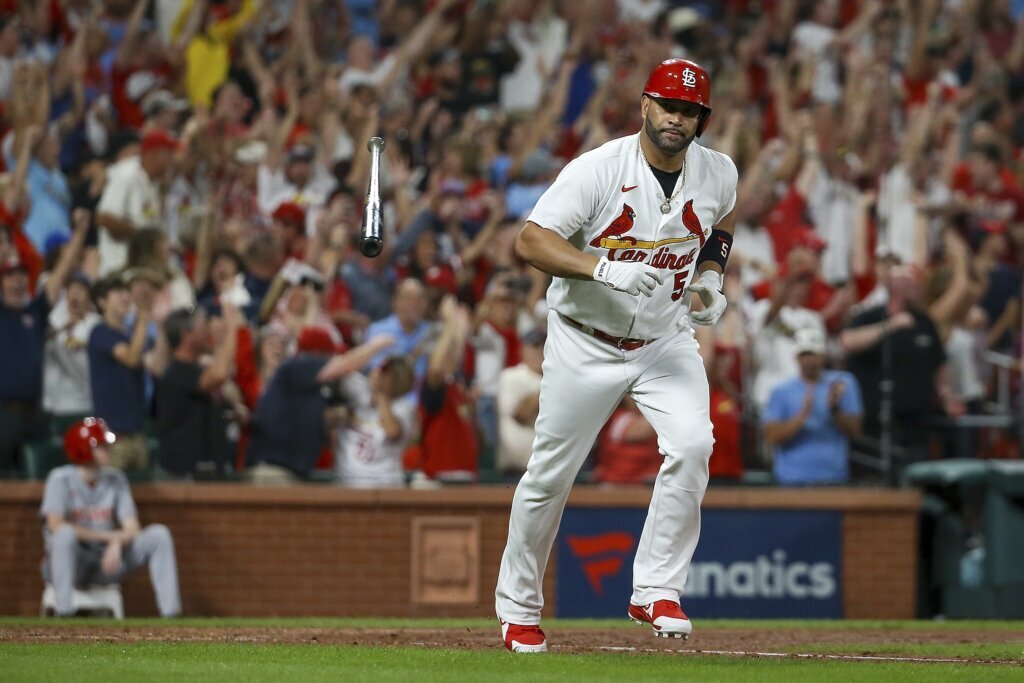 Pujols hit a first-pitch slider from Raynel Espinal 427 feet into the left-field stands for his 19th home run this season, tying the score 4-4. Pujols trails only Barry Bonds (762), Hank Aaron (755) and Babe Ruth (714) on the career list.

Ryan Helsley struck out Kyle Farmer, Jake Fraley and Donovan Solano on nine pitches for his 18th save in 22 chances, the third immaculate inning in Cardinals history after Bob Gibson in 1969 and Jason Isringhausen in 2002.

Pujols hit a drive to T.J. Friedl at the left-field wall in the seventh. He is in his 22nd major league season and intends to retire at the end of the season.

After Farmer homered off JoJo Romero to give Cincinnati a 5-4 lead in the seventh, Brandon Donovan walked against Ian Gibaut (1-2) leading off the bottom half, and Paul Goldschmidt and Nolan Arenado followed with consecutive RBI doubles.

Goldschmidt doubled twice and got his 111th RBI.

Reds starter Fernando Cruz, wearing No. 21 to honor Roberto Clemente, retired his first five batters as an opener before hitting Pujols with a pitch and coming out of the game.

Reds: RHP Hunter Greene (right shoulder strain) will be activated off the injured list to start the night game of Saturday’s doubleheader, his first start since Aug. 1 at Miami.

Cardinals: OF Dylan Carlson (sprained left thumb) started in center field for Triple-A Memphis Friday night at Iowa and hit a pair of doubles in three at bats. He is expected to start for Memphis Saturday and Sunday and could rejoin the big league club Tuesday.