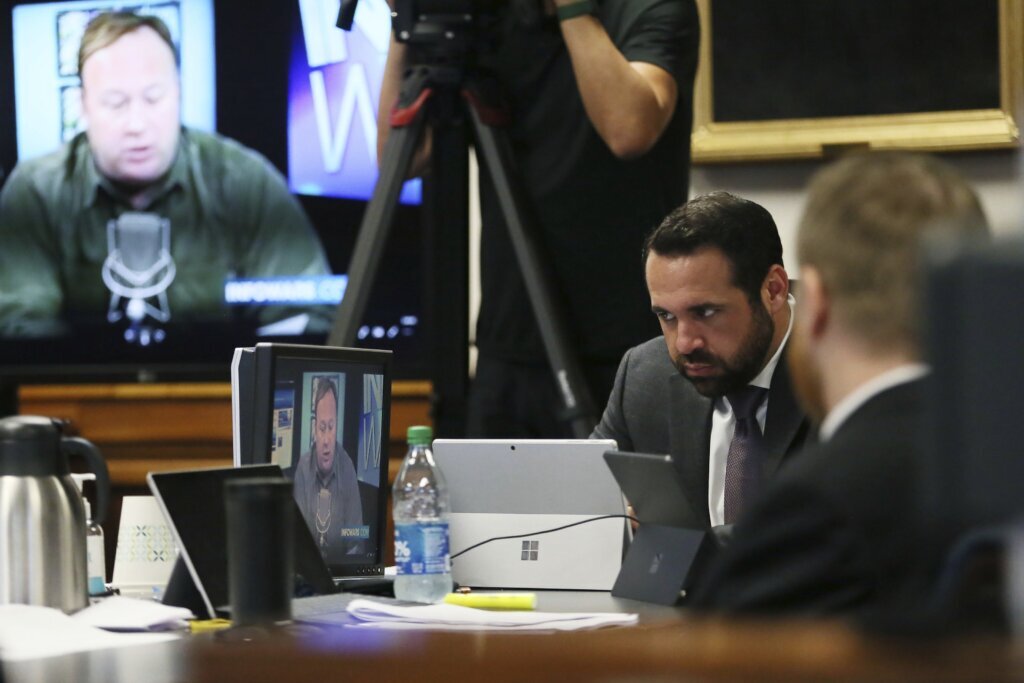 AUSTIN, Texas (AP) — The father of a 6-year-old killed in the Sandy Hook Elementary School shooting said Tuesday that…

AUSTIN, Texas (AP) — The father of a 6-year-old killed in the Sandy Hook Elementary School shooting said Tuesday that it was “cowardly” of Alex Jones to skip hearing his testimony in person about how Jones’ claims that the massacre was a hoax deeply affected his family.

“What was said about me and Sandy Hook itself resonates around the world,” Neil Heslin testified Tuesday. “As time went on I truly realized how dangerous it was … My life has been threatened. I fear for my life, I fear for my safety.”

Heslin and Scarlett Lewis, the parents of 6-year-old Jesse Lewis, have sued Jones and his media company Free Speech Systems over the harassment and threats they and other parents say they’ve endured for years while Jones and his Infowars website claimed the 2012 attack that killed 20 first-graders and six staffers at the Connecticut school was a hoax or faked.

Heslin and Lewis are seeking at least $150 million in the case.

“Today is very important to me and it’s been a long time coming … to face Alex Jones for what he said and did to me. To restore the honor and legacy of my son,” Heslin said.

Heslin and Lewis suffer from a form of post-traumatic stress disorder that comes from constant trauma, similar to that endured by soldiers in war zones or child abuse victims, a forensic psychologist who studied their cases and met with them testified Monday.

Tuesday is the last scheduled day of testimony. Jones, who has skipped large portions of the trial, and brought a cadre of bodyguards when he does attend, was expected to testify as the sole witness in his defense, his attorney said.

Jones has portrayed the lawsuit against him as an attack on his First Amendment rights.

At stake in the trial is how much Jones will pay. The parents have asked the jury to award $150 million in compensation for defamation and intentional infliction of emotional distress. The jury will then consider whether Jones and his company will pay punitive damages.

The trial is just one of several Jones faces.

Courts in Texas and Connecticut have already found Jones liable for defamation for his portrayal of the Sandy Hook massacre as a hoax involving actors aimed at increasing gun control. In both states, judges issued default judgements against Jones without trials because he failed to respond to court orders and turn over documents.

Jones has already tried to protect Free Speech Systems financially. The company filed for federal bankruptcy protection last week. Sandy Hook families have separately sued Jones over his financial claims, arguing that the company is trying to protect millions owned by Jones and his family through shell entities.