All Rams will wear ‘Choose Love’ helmet decals vs Bills 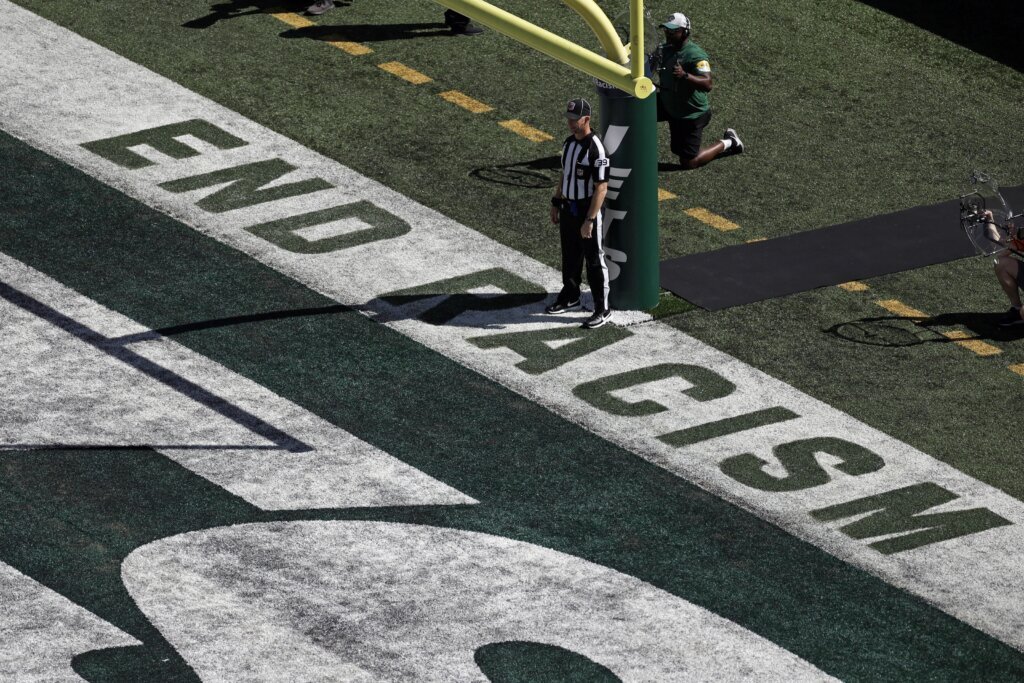 Every player on the Los Angeles Rams will wear a “Choose Love” decal on their helmet for the season opener against the Buffalo Bills. NFL teams will stencil “It Takes All of Us” and “End Racism” in end zones for the third straight season as part of the league’s Inspire Change social justice initiative.

Players can choose one of seven messages for their helmets this year. The six others remain the same: “End Racism,” “Stop Hate,” “It Takes All of Us,” “Black Lives Matter,” “Inspire Change” and “Say Their Stories.”

The league said it added the “Choose Love” message because of an increase in hate crimes and gun violence around the country. Ten Black people were killed and three individuals were injured in a shooting at a supermarket in Buffalo earlier this year.

Each club will again highlight its social justice work during a regular-season game in Weeks 15 and 16. On-field displays will include Inspire Change banners, goal post wraps, stencils, helmet decals and video board graphics.

“As we kick off another NFL season, the league’s commitment to social justice remains as present on field and in stadium across all 32 clubs as it is in communities nationwide,” Anna Isaacson, NFL senior vice president of social responsibility, told The Associated Press. “This year, we’re expanding efforts to include the Inspire Change Changemaker Award which will honor a local social justice changemaker from each club market.

The NFL will continue to feature “Lift Every Voice and Sing,” widely known as the Black National Anthem, as part of its entertainment lineup at major events.

The end zone stencils will be placed on field for all clubs in all home games, except when another cause is being recognized. During a club’s Salute to Service game, “End Racism” will be replaced with “Salute To Service” in one end zone and “It Takes All of Us” will remain on the opposite side.

Each team will select a local changemaker, an individual who is making a difference in their community through social justice work, either individually or as part of a non-profit organization. The 32 changemakers will receive a $10,000 grant to continue their efforts and will be recognized during their respective club’s Inspire Change home game and during Super Bowl week in Phoenix.

Inspire Change showcases the collaborative efforts of players, owners, and the league to create positive change in communities across the country and aims for equal opportunity for all.

Inspire Change supports programs and initiatives that focus on education, economic advancement, criminal justice reform and police-community relations. The league made a 10-year, $250 million commitment to social justice as part of Inspire Change and announced in June that it had surpassed $244 million in funding in just five years.