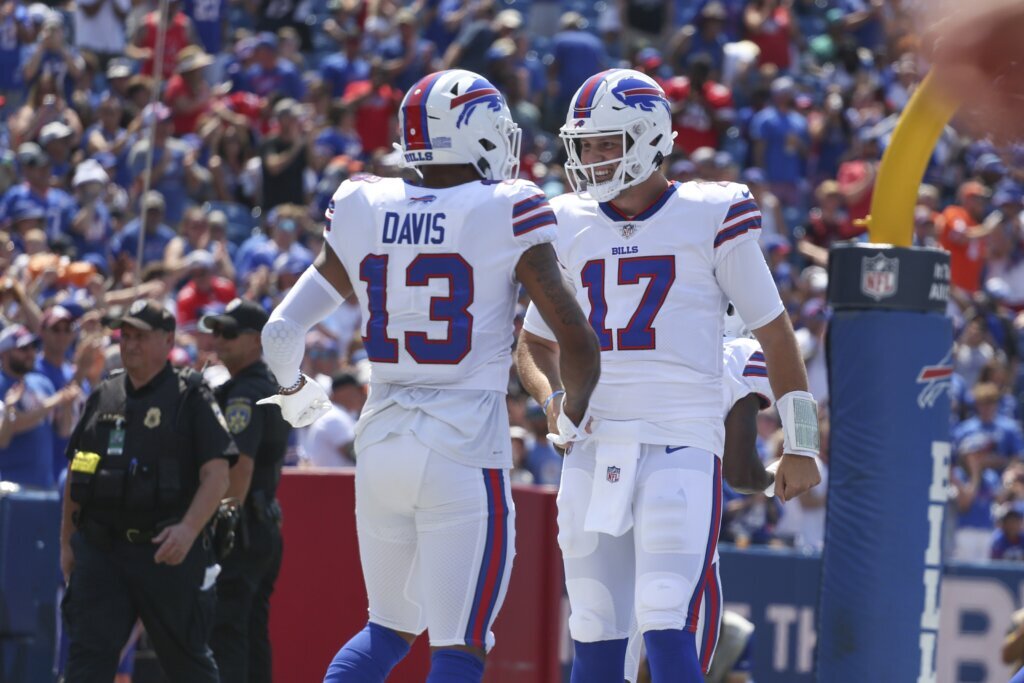 ORCHARD PARK, N.Y. (AP) — Six plays, covering 70 yards and capped with a touchdown, was all it took for…

ORCHARD PARK, N.Y. (AP) — Six plays, covering 70 yards and capped with a touchdown, was all it took for Buffalo Bills quarterback Josh Allen in his preseason debut to show he’s ready for the regular season.

Eluding the pass rush, Allen spun around while stepping back in the pocket and found Gabe Davis for a game-opening 28-yard touchdown in an eventual 42-15 rout of the Denver Broncos backups on Saturday.

“It did feel weird only to play six, you know, once you get into that little rhythm,” said Allen, who had been anticipating going back out for one more drive before being told to take a seat.

“But shout-out to our guys coming out and playing today. Playing hard. Making plays. Came out with intensity from the get-go,” Allen added. “I’m proud of how we handled ourselves today. It was good to see.”

It was just like old times again, Davis said, referring to an Allen-led offense which has been one of the NFL’s most dynamic over the past two seasons.

“Yeah, 100% just picking up where we left off,” Davis said. “Just having that same chemistry and kind of thinking alike, I’m glad we were on the same page.”

Just as important, the offensive output — the Bills totaled 510 yards and scored touchdowns on each of their first six possessions — showed the team being on the same page as newly promoted offensive coordinator Ken Dorsey. Buffalo’s former quarterbacks coach replaces Brian Daboll, who was hired by the New York Giants this offseason.

Allen completed all three attempts for 45 yards, while backup Case Keenum closed out the first half overseeing three touchdown drives and finishing 16 of 18 for 192 yards and a perfectly placed 7-yard touchdown pass to tight end O.J. Howard.

It was a bounce-back outing for Keenum, who threw two interceptions and lost a fumble in a 27-24 win over Indianapolis last week.

“I thought Dorsey was dialing them up with some great play calls,” said Keenum, who also got a chance to play with the starters during his first series. “I think those were priceless reps that you don’t get very often, so I wanted to make the most of them.”

Zach Moss rounded out the first-half scoring with a pair of 1-yard touchdown runs, while Duke Johnson scored on 2- and 8-yard runs in the second half.

Buffalo extended its preseason winning streak to 10 games. The run is the NFL’s second-longest active streak behind the Baltimore Ravens, who have won a league-record 21 straight, and play at Arizona on Sunday.

The Broncos took a step back after a 17-7 preseason-opening win over Dallas, while resting Russell Wilson and many of their starters for a second straight week.

First-year coach Nathaniel Hackett was left disappointed, especially after entering the game intrigued to see how his young defenders and backups on defense would hold up against Allen and Co.

Journeyman Josh Johnson finished 8 of 16 for just 70 yards in the first half in his bid to lock up the backup job.

After overseeing a 12-play, 64-yard opening drive that ended with Brandon McManus hitting a 33-yard field goal, Johnson’s final three drives of the half combined for 52 yards and three first downs.

BRONCOS: P Sam Martin was ruled out after hurting his ankle in pregame warmups. … CB Michael Ojemudia dislocated his right elbow in the second quarter. … OT Casey Tucker wore a protective boot on his right foot after being hurt in the third quarter.

BILLS: S Nick McCloud returned after requiring six stitches to close a gash on his face in the first quarter.

The Bills held a moment of silence before the game to honor Florida International linebacker Luke Knox, who died on Wednesday. Knox is the younger brother of Bills tight end Dawson Knox, who has been excused from the team to be with his family. Bills fans have rallied to Knox’s support by donating more than $100,000 to the P.U.N.T. Pediatric Cancer Collaborative, a charity supported by the tight end.

Bills: Close preseason at the Carolina Panthers on Friday.