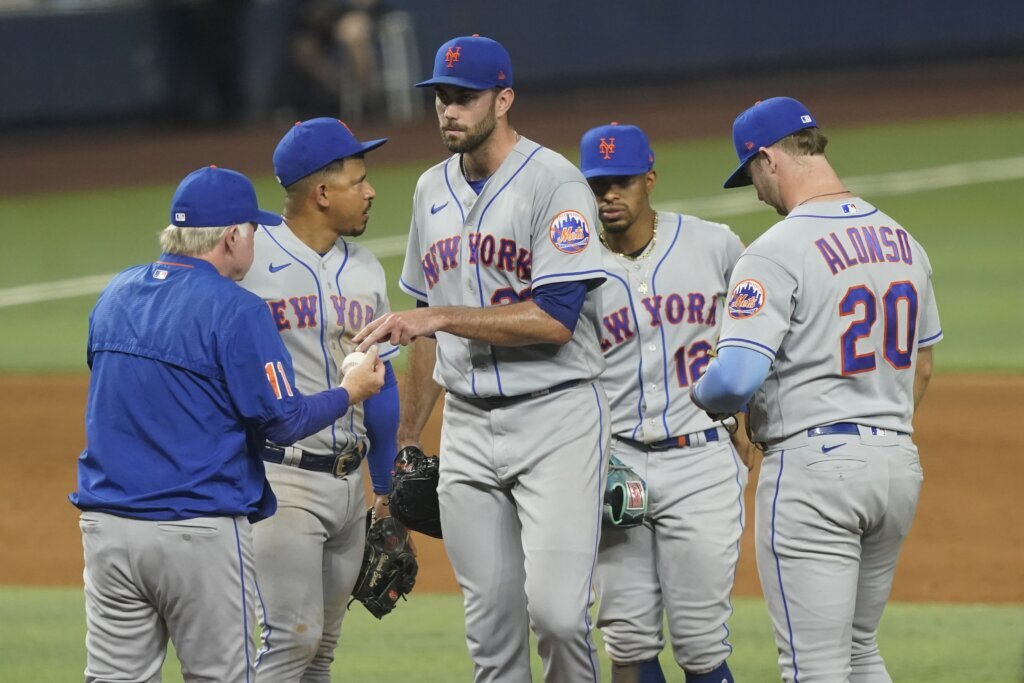 MIAMI (AP) — Pete Alonso hit his 33rd home run but the New York Mets could not erase an early deficit and lost 6-3 to the Miami Marlins on Friday night.

New York, which began the day clinging to a half-game lead in the NL East over Atlanta, squandered a pair of good scoring chances by grounding into double plays.

The defending World Series champion Braves played later in Seattle, looking to take sole possession of first place for the first time all season. The only day this year the Mets did not hold at least a share of the division lead was April 11.

Garrett Cooper homered, doubled and singled for the Marlins, who have never had a player hit for the cycle. It was Cooper’s third straight multi-hit game following a prolonged slump.

The Mets chipped away at a 4-1 deficit with Alonso’s two-run shot against Miami starter Edward Cabrera in the sixth. Tyler Naquin followed with a walk that ended Cabrera’s outing.

One-out singles from Eduardo Escobar and Tomás Nido off Marlins reliever Tanner Scott and a walk to Brandon Nimmo loaded the bases in the seventh. Steven Okert relieved Scott and retired Francisco Lindor on a double-play grounder.

The Marlins regained their three-run advantage on Charles LeBlanc’s two-run homer against reliever Joely Rodriguez in the eighth. Rodriguez then issued one-out walks to Jerar Encarnación and Bryan De La Cruz. In an unfamiliar role, Mets closer Edwin Díaz entered and got the next two outs.

Okert got three outs in the eighth and Dylan Floro closed with a perfect ninth for his fourth save.

Nick Fortes had three hits and Miguel Rojas doubled twice for the Marlins, who finished with 10 hits. Miami has double-digit hits in a season-high three straight games.

The Marlins struck quickly on Cooper’s two-run homer in the first. Cooper drove a changeup from starter David Peterson over the wall in left-center for his eighth homer.

Brandon Nimmo’s run-scoring single in the third made it 2-1, but Jeff McNeil bounced into an inning-ending double play with runners at the corners.

Peterson (7-4) was lifted after 3 2/3 innings. The left-hander gave up three runs, seven hits and two walks. He struck out seven.

New York fell to 3-4 in its last seven games against a trio of struggling teams: Washington, Pittsburgh and Miami.

Marlins: 2B Jazz Chisholm Jr. (lower back strain) moved his rehabilitation program to Miami from the club’s spring training facility in Jupiter. Chisholm still has not been cleared for baseball activities.

The Mets sent RHP Adonis Medina outright to Triple-A Syracuse after he was designated for assignment Wednesday.