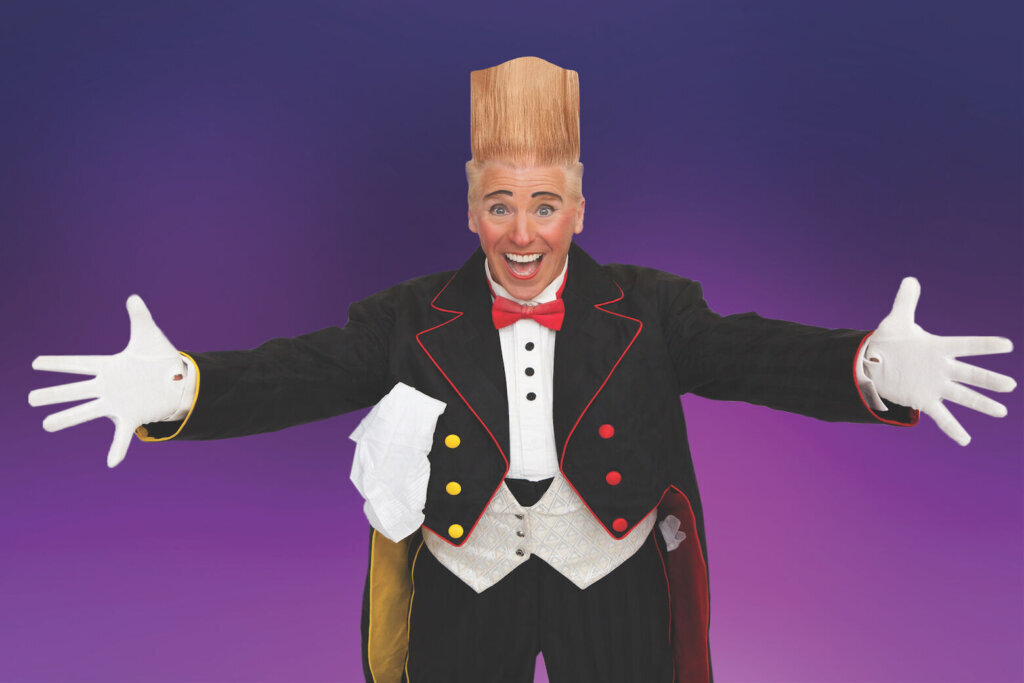 He was shot out of a cannon over a helicopter on TV’s “America’s Got Talent.”

“The word ‘Funambula’ is the French word for wire-walker, a guy with an uncanny sense of balance,” Nock told WTOP. “There is no other form of entertainment that four generations can sit and enjoy for 90 minutes. This show brings families together. … Everyone leans forward and has to pick their jaw up off the ground at some point in the show.”

The 90-minute show features more than a dozen acts, including death-defying daredevils, mesmerizing acrobats and a variety of never-before-seen stunts.

“You’re going to see the motorcycle globe, we call it a ‘Sphere of Fear’ … three motorcycles and a total of five people inside that cage of doom,” Nock said. “The Towering Sway Pole, a 50-foot-tall dried spaghetti noodle where you climb to the top and it sways back and fourth and hopefully doesn’t fall. We also have ‘Cirque du Soleil’ artists that will amaze.”

Nock, coming from a long line of daredevils, says entertaining is in his blood.

“Both sides of my family, seven generations back have been entertainers,” Nock said. “My family’s history dates back to 1772 — that’s older than America. In 1840, they founded their own circus. … My parents never forced me to carry on the tradition. They just said we had to try it for 30 or 40 years. After that, I was free to make any decision!”

Along the way, the 53-year-old has befriended titans of showbiz.

“I traveled around the world with Walt Disney’s brother Roy Disney when I was 3 years old,” Nock said. “My dad’s friends were ‘Evel Knievel’ Karl Wallenda, (his great-grandson) Nik Wallenda is a friend of mine. … My best friends were anyone from Kenny Rogers to David Copperfield. … I have designed and set wires for (Philippe Petit).”

D.C. audiences saw him headline Ringling Bros. and Barnum & Bailey Circus from 2000 to 2008 before capturing the world’s attention on TV shows like “America’s Got Talent.”

“I’m the guy with foot-tall orange hair, I wear a tuxedo,” Nock said. “People have seen me on three, maybe four seasons of ‘America’s Got Talent.’ I lost all four of them, but I was a champion on ‘Britain’s Got Talent.’ I did ‘World’s Got Talent’ for 100 million viewers.”

What’s the secret to getting shot out of a cannon?

“You have to be right caliber,” Nock said. “If you get inside of a human cannon hoping everything goes well, that’s like getting inside of a space shuttle and wondering. Everyone involved has the same outlook and determination for success. Failure is never an option.”

Today, he holds 16 Guinness World Records for his death-defying stunts.

“Walking a wire on a cruise ship is one, it was at sea … rocking back and forth,” Nock said. “Other ones are eight hours balancing on a chair on a high-wire in the heart of Times Square in New York City. … I did 14 single-finger pushups, one finger on each hand, then I held a single-finger stand for 14 seconds, but I did single-finger pull-ups, 14 of them!”

He was even awarded the the circus world’s highest honor: The Gold Clown.

“No amount of money can pay you to risk your life if you don’t enjoy it,” Nock said. The three top fears in the world are fear of heights, fear of failure or being laughed at, and fear of being in front of a large audience. I make a living and enjoy doing all three at once. People will laugh at me, a large audience, when I’m 40, 50, 60 feet in the air.”

Ghislaine Maxwell sentenced to 20 years in prison for sex trafficking