ANTHONY JOSHUA threw FEWER punches in his rematch with Oleksandr Usyk than he did in their first fight – despite his change of tactics.

The Brit suffered a split decision loss in his Saudi showdown with the WBA, IBF and WBO heavyweight champion last weekend.

But the Watford warrior only ended up landing ONE more punch on the fleetfooted and elusive Usyk.

Joshua threw 429 punches in comparison to the 641 he tried to land last year.

AJ, 32, managed to connect with the undefeated Ukrainian 124 times at the King Abdullah Sports City Arena. 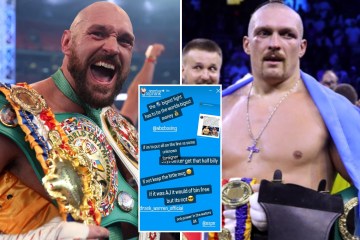 The majority of Joshua’s success came in the ninth round, in which he hurt the former undisputed cruiserweight king.

But Usyk came roaring back in the final three rounds, showing the heart of a champion in the tenth.

In an interview with iFL TV, promoter Eddie Hearn said of the Usyk’s showing in the tenth: “I felt he lost by two rounds but when it’s 115-113, it’s the swing of one or two rounds and you can see it the other way.

“I had AJ level or maybe up at the end of the ninth but Usyk winning the last three rounds.

“I thought he was incredible and it was one of the great performances.

“The ninth, Usyk was all over the place. He was hurt badly.

“What he did in the tenth was unbelievable and that’s why he was pound-for-pound number one.

“The amount of punches he threw in the tenth was incredible. I just couldn’t believe what he did in the championship rounds.”

A furious Joshua raged on the microphone after his second successive loss but was quick to apologise for his actions.

He tweeted: “I wish @usykaa continued success in your quest for greatness. You are a class act champ.

“Yesterday I had to mentally take myself into a dark place to compete for the championship belts!

“I had two fights, one with Usyk and one with my emotions and both got the better of me.

“I’ll be the first to admit, I let myself down.

“I acted out of pure passion and emotion and when not controlled it ain’t great.

“I love this sport so so much and I’ll be better from this point on. Respect.”