ANTHONY JOSHUA has the “physical tools” to KO Tyson Fury, according to David Haye.

The pair are set to meet in a £75million Battle of Britain world heavyweight showdown in Cardiff on December 3.

The Brit said: “If anyone has the physical tools to beat Fury, the No 1 monster in the heavyweight division, then it is AJ.

“Many years ago, Fury and Joshua sparred and AJ got the better of him.

“If AJ can be strong, fast and aggressive against Fury then he has a chance of surprising everyone.” 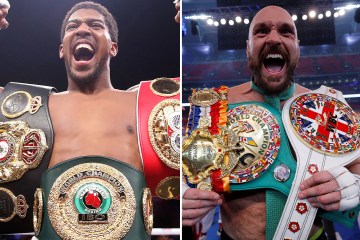 That 2010 session at Joshua’s Finchley club saw the Watford novice shake Fury with an upper cut.

Now AJ, 32, is desperate to take the Gypsy King’s WBC crown after failing to regain his WBA, IBF and WBO belts in his rematch defeat to Ukrainian Oleksandr Usyk last month.

The Hayemaker added: “The world will have him as the underdog but for the first time ever the pressure will be totally off him and all on Fury.”

Haye also hopes his former protege Joe Joyce, 37, takes another step towards one of AJ’s old world titles on Saturday when he faces Joseph Parker.

He added: “It’s a real high-risk fight for Joe because he doesn’t have one or two years to rebuild if he loses.”