ANTHONY JOSHUA’S trainer Robert Garcia claims that his man “defeated himself” during round ten of his rematch with Oleksandr Usyk.

AJ, 32, enjoyed success in round nine – stinging Usyk as he launched blow after blow.

But the Ukrainian came roaring back in the very next stanza, regaining control and never looking back on his way to victory.

Garcia, 47, believes that Joshua could have won the fight, but that Usyk’s surge in round ten changed everything.

Speaking to IZQUIERDAZO, the American said: “During that ninth round, in the corner [we] were telling ourselves we had the fight. 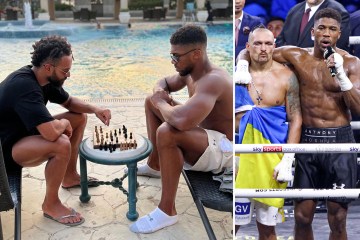 “I’ve even thought in these last few days that it was Joshua who mentally defeated himself.

“Joshua was mentally defeated since round ten or 11. Round ten was a big one for Usyk.

“That changed the whole fight, and mentally we were defeated.”

Garcia held onto hope that his man may produce a late knockout, but to no avail.

He added: “At that point, we were relying on a good shot or something like that, because Anthony is a hard puncher, and one shot can change a fight.

“That is what we were hoping for, one shot, because he was dominated at that point of the fight.”

AJ was pictured for the first time since his defeat on Friday, playing chess poolside with right-hand man JC Elite.

While AJ licks his wounds, Usyk is set to progress to a mouthwatering unification bout with WBC champion Tyson Fury.

The Gypsy King intends to inform the WBC that he is NOT retiring and there is no need to vacate his belt.

But he has demanded £500m to fight Ukrainian hero Usyk.