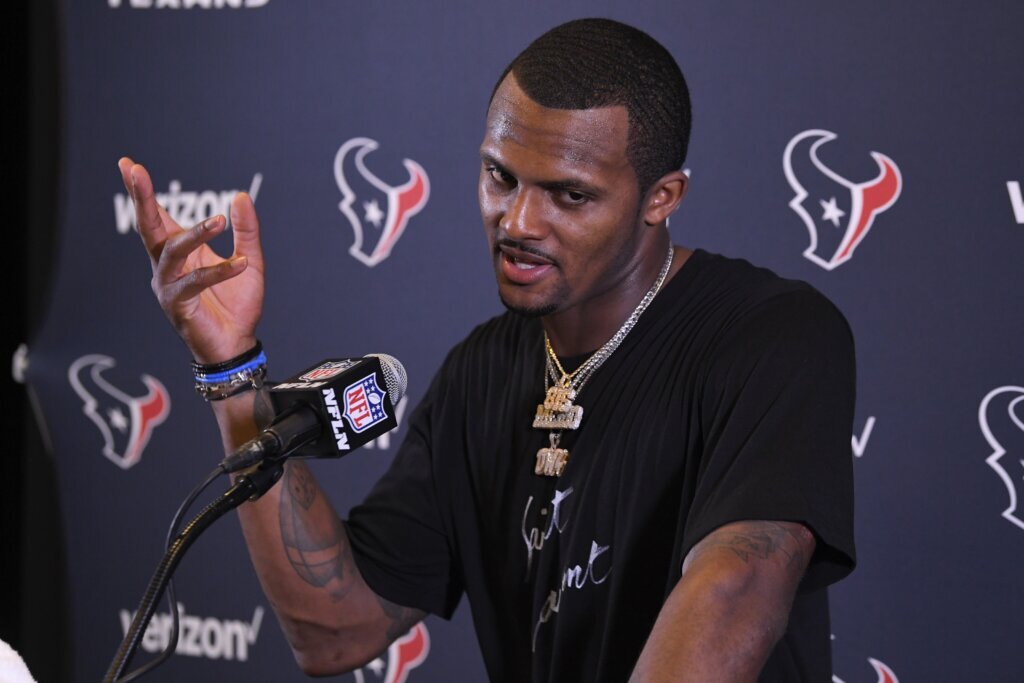 The NFL insisted on an indefinite suspension while Deshaun Watson’s legal team argued there’s no basis for that punishment as both sides presented their cases in front of a retired judge in Delaware on Tuesday, two people in attendance told The Associated Press.

The hearing will continue on Wednesday and Watson is scheduled to be there for the duration, according to one person who spoke on condition of anonymity because the hearing isn’t public. It’s expected to conclude Thursday but it’s not known when a ruling will be made.

Former U.S. District Judge Sue Robinson, who was jointly appointed by the league and the NFL Players’ Association, will determine whether Watson violated the NFL’s personal conduct policy and whether to impose discipline.

Watson agreed to settle 20 of 24 civil lawsuits for sexual misconduct, but the league is seeking at least a one-year suspension, one of the people told The AP. Watson’s side, led by attorneys Jeffrey Kessler and Rusty Hardin, wants the three-time Pro Bowl quarterback to play this season for the Cleveland Browns.

Watson has denied any wrongdoing and vowed to clear his name.

This is the first hearing for Robinson, who was the first woman Chief Judge for the District of Delaware. Previously, NFL Commissioner Roger Goodell had the authority to impose discipline for violations of the personal conduct policy.

Still, Goodell holds considerable power. If either the union or league appeals Robinson’s decision, Goodell or his designee “will issue a written decision that will constitute full, final and complete disposition of the dispute,” per terms of Article 46 in the collective bargaining agreement.

That means Goodell could ultimately overrule Robinson’s decision and suspend Watson for one year or even indefinitely due to the potential for more cases.

However, an appeal would prolong the process for both sides.

The NFL has punished several players for violating the league’s personal conduct policy without criminal charges. In 2010, Ben Roethlisberger received a six-game suspension after being accused of sexual assault by two women. Goodell later reduced the suspension to four games. Dallas Cowboys running back Ezekiel Elliott got six games in 2017 for domestic violence.

On Monday, a woman who previously sued Watson filed a lawsuit against the Houston Texans, alleging his former team provided him with resources to enable his actions and “turned a blind eye” to his behavior.

It’s unknown how long it will take Robinson to make a decision, but the Browns should know Watson’s availability before training camp. NFL discipline typically begins the week leading into the first regular-season game, so Watson would be eligible for camp unless a potential punishment stipulates otherwise.

The Browns traded a slew of draft picks to acquire Watson and gave him a five-year, $230 million guaranteed contract in March.

Cleveland, which opens training camp on July 27, is eager to find out how long it will be without Watson or if the Browns will have him at all next season.

The Browns signed veteran QB Jacoby Brissett to be Watson’s backup, but the team might be inclined to find a more high-profile starter should Watson be suspended for a significant period. Josh Dobbs is also on Cleveland’s roster, but he’s never started an NFL game.

Any reconciliation with Baker Mayfield seems unlikely. The No. 1 overall pick in 2018, Mayfield was essentially pushed aside when the Browns persuaded Watson to come to Cleveland.

At a youth camp in Oklahoma on Tuesday, Mayfield said there would need to be “some reaching out” for him and the Browns to repair their relationship.

“MJ was the greatest of all time; That’s a no-brainer, that’s an easy one”- Steve Kerr outrightly dismisses other contenders for the best-ever NBA player of all-time debate