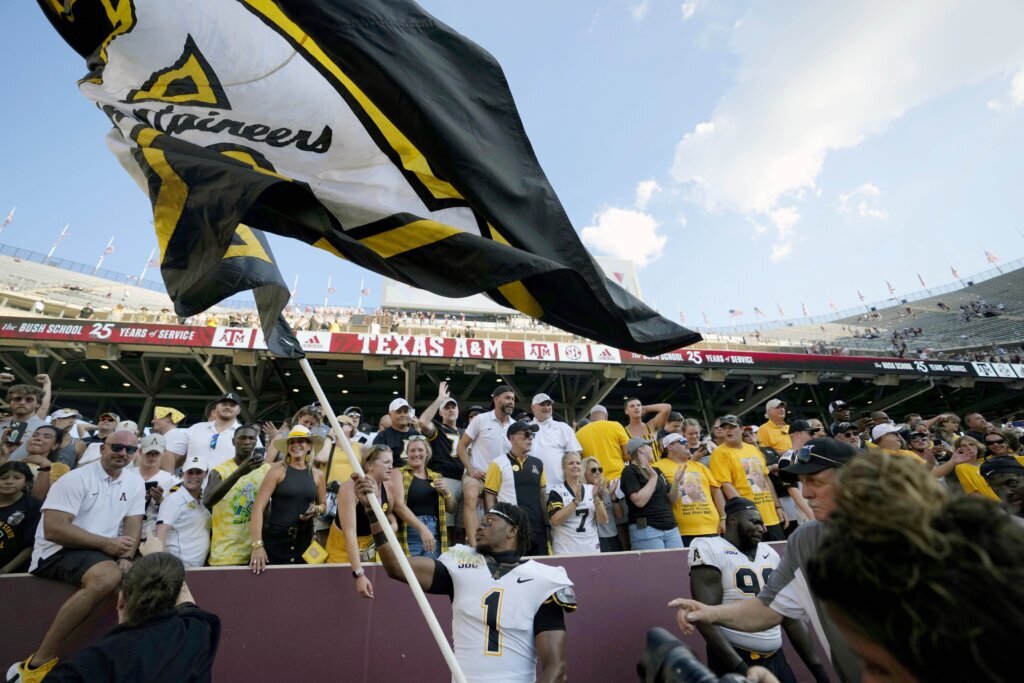 The college football offseason is mostly spent trying to figure what’s going to happen when the games start. We speculate.…

The college football offseason is mostly spent trying to figure what’s going to happen when the games start.

Then in Week 2 we realize just how much we didn’t know — and that’s when the fun starts.

No. 1 (though maybe not for much longer) Alabama needed every little bit of misfortune that conspired against Texas, plus a Heisman-worthy performance by its Heisman Trophy winner, to avoid its first regular-season nonconference loss since 2007 in Austin.

“We made a lot of mental errors,” Crimson Tide coach Nick Saban said. “Shooting ourselves in the foot.”

There was no escape for No. 6 Texas A&M and No. 8 Notre Dame. The Aggies and Fighting Irish were Sun Belted.

In South Bend, Indiana, the honeymoon for coach Marcus Freeman came to a resounding and stunning end when Marshall not only beat the Fighting Irish, but pushed them around right in front of Touchdown Jesus.

Marshall’s upset was only the opening act for the Sun Belt Conference.

Appalachian State, conjuring up memories of 2007 against Michigan at the Big House, squeezed the breath out of No. 6 Texas A&M, upsetting the Aggies with a master class of keep-away football.

Throw on top of that Washington State knocking off No. 19 Wisconsin in Madison, and it was a difficult day for double-digit favorites.

With all the midafternoon carnage in the AP Top 25, one might have forgotten all Alabama had to do to beat Texas. The game in Austin produced a result few expected and played out in a way that nobody would have imagined.

Longhorns coach Steve Sarkisian said in the week leading up to the matchup against his former boss, Saban, this game would not define his team. In the end, if it did, that might not be the worst thing.

Texas played with a grit and toughness it has rarely displayed during the program’s decade in the wilderness since losing the 2009 BCS title game to the Crimson Tide.

“I think we’re moving in the right direction with the roster, the style of play and the mentality of the type of opponents week in and week out,” Sarkisian told reporters.

The Longhorns missed a lot of opportunities, and just like that championship game in the Rose Bowl, they left a loss to Alabama with a what-if feeling.

What if Quinn Ewers wasn’t injured in the first half? The former five-star recruit with all the hype looked every bit like a rising star until he was knocked out with a sprained clavicle. The second-year quarterback might have avoided the worst-case scenario with the injury.

Without him, and with backup Hudson Card also hobbled, Texas didn’t have enough to withstand the heroics of Bryce Young.

The Tide doesn’t have the stocked stable of star receivers that it has had in recent years, and it couldn’t get the run game going against a Texas defense that hasn’t looked that feisty in a big game in a while.

Young was the show and he delivered.

“When his best was needed, he was really good,” Saban said. ”And that’s what we needed.”

Alabama started the season as an overwhelming No. 1, but don’t be surprised if defending champion Georgia reclaims the top spot.

Voters excused Notre Dame’s lack of offense last week at Ohio State, but Freeman might have some real problems on his hand.

There was a lot of “Don’t let the door hit you on the way out” from Irish fans when Brian Kelly bolted for LSU. They might be missing him now.

The early part of Kelly’s tenure featured some of these types of losses against Tulsa and Navy. But Kelly cleaned that up and Notre Dame won 42 straight victories against unranked teams — before Saturday.

If Notre Dame fans are having some buyer’s remorse with Freeman, what exactly is going on in College Station?

Aggies coach Jimbo Fisher won the offseason with a monster recruiting class and by lobbing barbs at Saban.

Fisher’s chesty defense of the program, and the victory against the Tide last season, has bought him a lot of credibility despite overall meh results for the coach who started the 10-year contract craze.

A&M looks as if it’s building toward something big, but if you are what your record says you are, Fisher’s tenure has left a lot to be desired. He is 35-15 after 50 games with an offense that looks fossilized. His predecessor, Kevin Sumlin, was 36-14 after 50 games.

Both Notre Dame at No. 5 and Texas A&M at sixth seemed like a stretch in the preseason rankings. Two weeks in, both might be unranked.

The Sun Belt is rising.

Long considered 10 of 10 among major college football conferences, the Belt has come a long way in recent years behind Louisiana-Lafayette, Appalachian State and Coastal Carolina.

This past offseason Commissioner Keith Gill and Sun Belt leadership decided to get aggressive and expand the conference by four, with Marshall among the additions.

Last week, Sun Belt newcomer Old Dominion knocked off Virginia Tech at home. It was a nice win, but also a sloppy mess.

On Saturday, Marshall and App State were straight up better than two of, ostensibly, the most talented teams in the country.

“In-house, no disrespect to Notre Dame, in-house, we expected it. Because we talked about this summer being a team that expects to win every time we touch the field,” second-year coach Charles Huff said.

App State allowed Texas A&M to run only 38 offensive plays and pounded the Aggies on the ground when they needed it most to close out the game.

“We’re going to have a hell of time on that plane ride back to Boone tonight,” Mountaineers coach Shawn Clark said.

Georgia Southern, led these days by former USC coach Clay Helton, capped the greatest day in Sun Belt history by beating Nebraska. Though is that even an upset anymore as the slow march toward a coaching change continues in Lincoln?

The three road victories by the Sun Belt against Power Five schools is the most by a Group of Five conference since 2000, matching a mark set in 2020 by … the Sun Belt.

Oh, and the Sun Belt schools were paid a total of just under $4.2 million by their opponents for their time and travel Saturday.

Nothing sums up the job Mark Stoops has done to turn around Kentucky better than this: The Wildcats have won three of the last five meetings with Florida. The Gators had won 34 straight in the series. … Suddenly, two close victories against Sun Belt schools on the road looks like reason to be optimistic about North Carolina as it heads toward Atlantic Coast Conference play. The Tar Heels held off Georgia State after surviving App State last week. … No. 24 Tennessee’s Cedric Tillman, who caught the winning touchdown in overtime against No. 17 Pitt, is one of the most underrated players in the country, overshadowed by a lot of great receivers around the country. Tillman had nine catches for 162 yards Saturday. … Iowa State coach Matt Campbell finally beat Iowa, snapping a six-game losing streak in the series in a grind of game that epitomizes the Cy-Hawk rivalry. Iowa did manage to score a touchdown this week. That’s 14 points for Brian Ferentz’s offense in two games. … Kansas, Duke and Rutgers are 2-0.

Follow Ralph D. Russo at https://twitter.com/ralphDrussoAP and listen at http://www.appodcasts.com