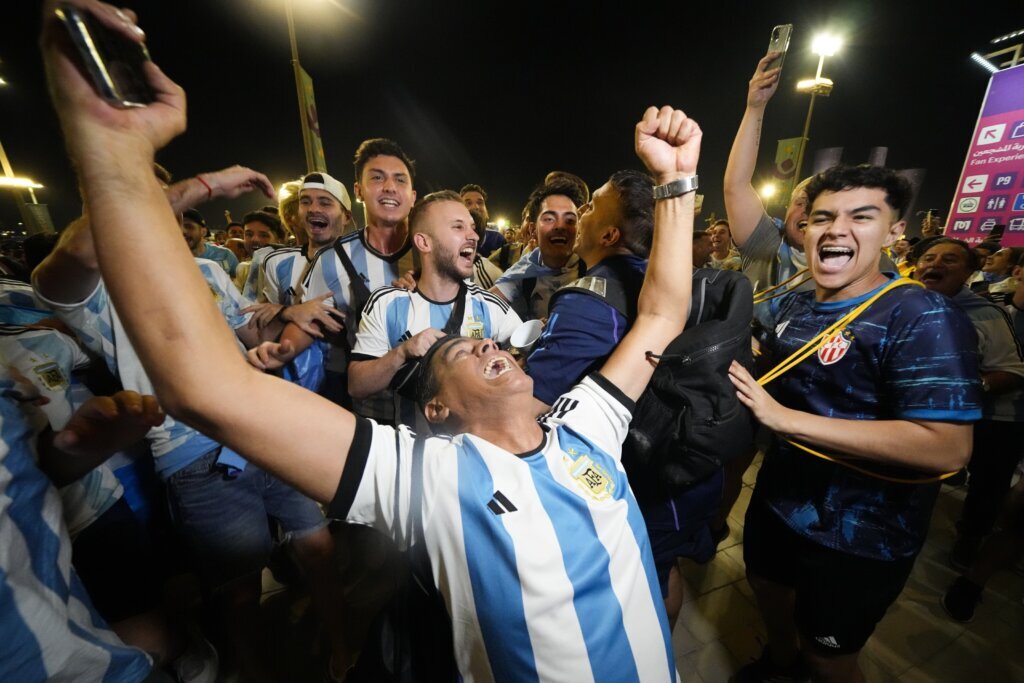 BUENOS AIRES, Argentina (AP) — Luciana Medina was so nervous that she could barely sleep the night before Saturday’s match…

BUENOS AIRES, Argentina (AP) — Luciana Medina was so nervous that she could barely sleep the night before Saturday’s match between Argentina and Mexico which could have all but knocked the soccer-mad South American country from the World Cup.

After the game, she couldn’t stop smiling.

“I’m so proud. I truly loved the match,” Medina, a 23-year-old communications student, said while wearing an Argentina jersey. “I’m so happy.”

Argentines breathed a collective sigh of relief Saturday afternoon as the country obtained a decisive 2-0 victory over Mexico dissipating doubts that had emerged about Lionel Messi’s team after the shock loss against Saudi Arabia on Tuesday. That loss had sent the country almost into a state of national mourning.

“The whole week was very sad, everyone was very aggressive as well, as if they were lost, without knowing what to do,” Medina said. “We were all very nervous.”

María del Carmen Martínez, 60, said she was “very tense” when she arrived at a plaza in Buenos Aires to watch the match on giant screens.

“I’m happy now,” the retail worker said with a smile. “It’s as if the players finally woke up.”

Manuel Gauto, 21, agreed he saw a different team on the field than the one that fell before Saudi Arabia.

“They rose to the occasion and put their hearts into it,” Gauto said. “They have another attitude now.”

The mood was completely different in Mexico City, where thousands had gathered in bars and plazas to follow the match only to be left disappointed by their team’s performance.

The coach “gave away the game,” complained Daniel Martínez minutes after the match ended. “We’re completely destroyed, but this doesn’t end here.”

There were long periods of silence in Mexico City’s Revolution Square as fans found few moments to celebrate.

“I’m crying out of emotion but also sadness,” Lupita Díaz said. “I love soccer but Mexico is failing us now.”

In Buenos Aires, the tension was almost palpable as thousands gathered on a hot summer day to watch the decisive game, and an eerie silence fell over the crowd throughout the first half as neither side obtained a goal and doubts once again crept in about the team long thought to be one of the favorites to win the World Cup.

“I went through a lot of emotions, first I was very nervous and anxious for the game to start and in the first half I saw that something was missing,” Valeria Benítez, 24, said.

All that pent up energy made the crowd explode in jubilation when Messi scored the first goal.

“The planets aligned in the second half, I thought they played well, there was a strategy that was well thought out,” Benítez said. “Let’s hope this is only the beginning.”

Karen Veliz, a 36-year-old accountant, went to watch the match with her family and friends, but found it hard to have fun at first.

“I was super, super nervous. It was only after they got the first goal that I could finally relax,” she said.

Argentines had been eagerly awaiting the World Cup, counting on the tournament to shift the mood of a country that has been economically stagnant for years, is suffering one of the world’s highest inflation rates and where close to four in 10 live in poverty.

Matías Stamm, a 26-year-old programmer, said he felt much lighter after what he described as “a very complicated week because we came from a very positive streak and then fell in the first game of the Cup.”

Many fans were particularly frustrated at Tuesday’s loss against Saudi Arabia, a match seemingly everyone expected Argentina to win, given the team’s 36-game unbeaten streak leading up to the tournament.

“Winning games is super important to recover confidence,” Stamm added. “We have to go with humility and calm because each game is a final.”

For Ariel Rivera, a 37-year-old, software developer, said that Saturday’s victory showed “there is still hope.”

“Argentina has everything that it needs to be able to win,” Rivera said. “I think we’re going to go far.”

After losing to Michigan again, Ohio State tries to move on