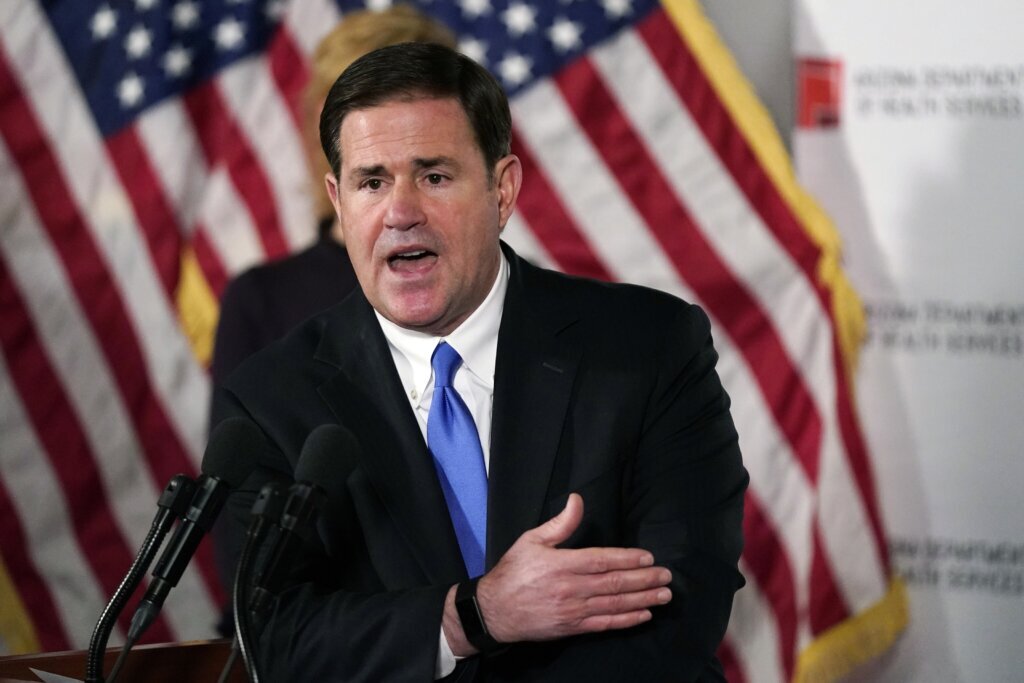 PHOENIX (AP) — Arizona can enforce a near-total ban on abortions that has been blocked for nearly 50 years, a…

PHOENIX (AP) — Arizona can enforce a near-total ban on abortions that has been blocked for nearly 50 years, a judge ruled Friday, meaning clinics across the state will have to stop providing the procedures to avoid the filing of criminal charges against doctors and other medical workers.

An injunction has long blocked enforcement of a law, on the books since before Arizona became a state, that bans nearly all abortions. The only exemption is if the woman’s life is in jeopardy.

The ruling also means people seeking abortions will have to go to another state to obtain one.

An appeal of the ruling is likely.

The decision from Pima County Superior Court Judge Kellie Johnson came more than a month after she heard arguments on Republican Attorney General Mark Brnovich’s request to lift the injunction. It had been in place since shortly after the U.S. Supreme Court’s 1973 decision in the Roe v. Wade case, which held that women had a constitutional right to abortion.

The high court overturned Roe on June 24 and said states can regulate abortion as they wish.

What’s allowed in each state has shifted as legislatures and courts have acted. Bans on abortion at any point in pregnancy are in place in 12 Republican-led states.

In another state, Wisconsin, clinics have stopped providing abortions amid litigation over whether an 1849 ban is in effect. Georgia bans abortions once fetal cardiac activity and be detected and Florida and Utah have bans that kick in after 15 and 18 weeks gestation, respectively.

PHOENIX (AP) — A new Arizona law banning abortions after 15 weeks of pregnancy takes effect Saturday as a judge weighs a request to allow a pre-statehood law that outlaws nearly all abortions to be enforced.

The 15-week law passed by the Republican-controlled Legislature and signed by GOP Gov. Doug Ducey in March was enacted in hopes the U.S. Supreme Court would pare back limits on abortion regulations. It mirrored a Mississippi law that the high court was considering at the time that cut about nine weeks off the previous threshold.

Instead, the conservative justices who hold a court majority completely overturned Roe v. Wade, the 1973 ruling that said women have a constitutional right to end a pregnancy. Now states are allowed to make all abortions illegal, and a dozen have while others have enacted new limits.

“In Arizona, we know there is immeasurable value in every life – including preborn life,” Ducey said in his March 30 signing letter. “I believe it is each state’s responsibility to protect them.”

The same day he signed the abortion ban, Ducey also approved legislation banning transgender women and girls from playing on women’s sports teams. It also takes effect Saturday, along with most other laws passed this year.

Meanwhile, abortion providers await a decision by a judge in Tucson who is considering a request from Republican Attorney General Mark Brnovich to lift an injunction in place since just after Roe was decided that blocked enforcement of the pre-statehood law.

Judge Kellie Johnson said during a hearing last month that she would rule on Sept. 20 at the earliest. Planned Parenthood and its Arizona affiliate had urged her not to allow the old law to be enforced against medical providers and instead allow the host of other abortion restrictions passed since Roe was overturned to stand.

Ducey has a similar take. He has argued that the 15-week ban he signed takes precedence over the old law, which was first enacted as part of the set of laws known as the “Howell Code” adopted by 1st Arizona Territorial Legislature in 1864.

Despite his conflict with Brnovich over whether the new or old laws take precedence, Ducey did not send his in-house lawyers to argue for his position at the Aug. 19 hearing.

The 15-week law will only effect about 5% of the abortions performed in the state, according to statistics in the previous three yearly reports compiled by the Arizona Department of Health Services. The state averaged just under 13,000 abortions per year during that time.

But combined with a law passed last year that bans abortions because a fetus has a genetic abnormality such as Down syndrome, the restrictions add up, said Dr. DeShawn Taylor, who provides abortion services at her clinic in Glendale.

“People forget that these percentages are actual people,” Taylor said in a Tuesday interview. “The population of Arizona continues to grow … and that five to 10% is a lot of people who otherwise either have to stay pregnant or find a means to get out of state to get the care they need.”

Taylor is an OB-GYN who runs Desert Star Family Planning, where she provides a full range of reproductive health care and is one of the few clinics that provide second-trimester abortions. Like virtually all abortion providers in the state, she stopped both surgical and medication abortions after the Supreme Court threw out Roe.

Providers pointed to the pre-statehood and a “personhood” law that has a provision banning abortion for genetic reasons that they feared could lead to prosecutions for shutting down. But after a federal judge on July 11 blocked that provision because he said it was unconstitutionally vague, Taylor and other providers restarted services.

But it was difficult because her staff still feared prosecution, she said. A longtime nurse had quit before Roe was overturned because she was worried about the upcoming decision, Taylor said.

Her medical assistant also left, and another nurse who had helped with abortions for three years was initially reluctant to restart procedures out of unfounded concerns she could be criminally charged.

“It took some time to convince that individual that I don’t want to go to jail either,” Taylor said. “Why would I be doing something illegal and asking her to do the same?”

Ultimately, the nurse agreed to help, but only with non-surgical abortions, Taylor said.

On Monday, Taylor said she did her last pre-abortion consultation because she expected the ruling could come on Tuesday. Arizona requires an ultrasound and consultation at least a day bore an abortion is performed, and she did not want patients to have to call off a procedure.

After a turbulent summer, Taylor said Friday that she has shut down her clinic for the rest of the month.

Give Gareth Southgate some slack, critics.. England were a penalty shootout away from being European champions under him