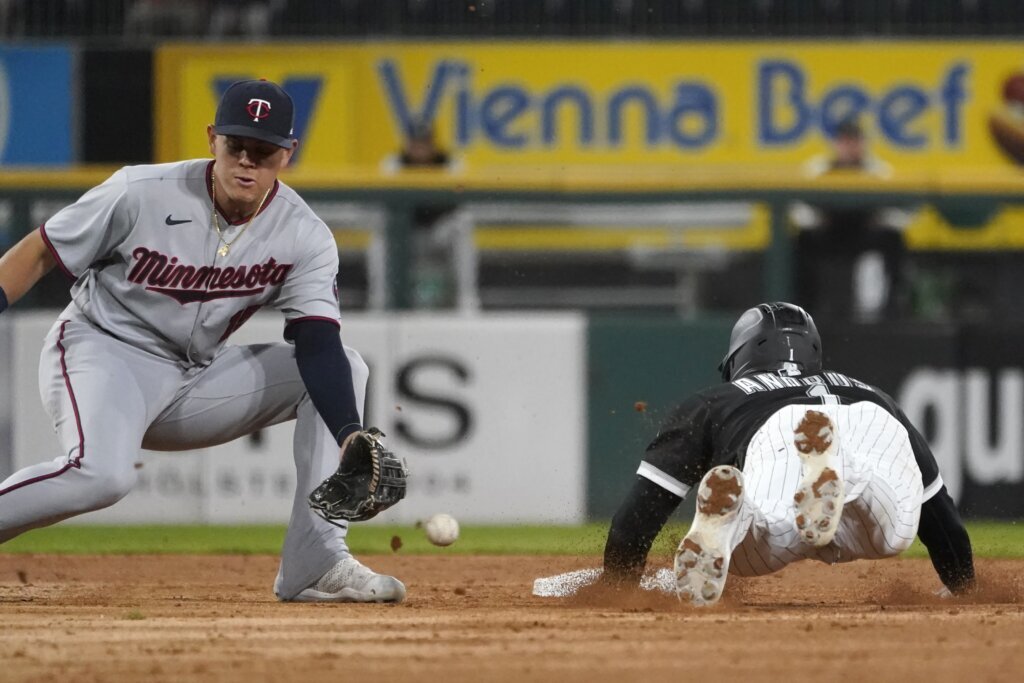 CHICAGO (AP) — Luis Arraez had one hit to move closer to his first AL batting championship, one of only…

Luis Arraez had one hit to move closer to his first AL batting championship, one of only two hits Minnesota managed off Lucas Giolito in seven innings as the Chicago White Sox beat the Twins 8-3 on Tuesday night.

Elvis Andrus hit his third homer in four games, a three-run shot, as the White Sox cruised to their second straight win after Tony La Russa stepped down as manager on Monday.

The 25-year-old Arraez extended his hitting streak to eight games and held his average at .315 has he tries to become the fifth Twins player to win the league batting title. He was back in the lineup as DH after missing the previous two games with a left hamstring injury.

Arraez is ahead of Yankees slugger Aaron Judge, who is hitting .311 in his bid for the AL Triple Crown. Judge hit his AL-record 62nd homer in the second game of New York’s doubleheader at Texas and leads the league with 131 RBIs.

Giolito allowed two runs on two hits and two walks and hit two batters as he won for the first time since Aug. 24. Tabbed as the White Sox ace before the season, Giolito finished 11-9 with a 4.90 ERA in an inconsistent season that mirrored his team.

Gavin Sheets had two RBIs, and Yoán Moncada, Eloy Jiménez and Adam Engel each drove in a run with a double as the White Sox won their fifth in six to improve to 81-80.

La Russa, who turned 78 on Tuesday, departed because of a pair of health issues, ending a disappointing season for the Hall of Famer.

Jermaine Palacios hit his first careeer homer in the ninth. Nick Gordon singled in a run and Jake Cave added a sac fly for Minnesota, which lost its fourth straight.

Twins starter Josh Winder (4-6) allowed four runs and was knocked out in the third.

Giolito hit the first two batters in the second with pitches. The second, José Miranda was struck on the left hand, then the ball deflected into his face,

Miranda tumbled to the dirt and was checked by a trainer, but walked off the field on his own and was replaced by Palacios. Miranda suffered only bruising to his mouth and lips and is day-to-day.

Joe Mauer, who won his third title in 2009, was the last Minnesota player to lead the AL in hitting. Twins Hall of Famers Rod Carew (seven times), Tony Oliva (three times) and Kirby Puckett (once) also have batting titles.

ABREU STAYING ON SOUTH SIDE?

White Sox slugger Jose Abreu becomes a free agent after the season when his three-year, $50 million contract extension runs out. The 35-year-old said before the game he’s still “hungry” for more baseball, but he’s not sure where that will be.

Abreu was AL Rookie of the Year with the White Sox in 2009 and led the league in RBIs in 2019 and 2020. White Sox owner Jerry Reinsdorf has said he wants Abreu to finish his career with the team.

But apparently nothing’s been discussed yet, said Abreu, who entered hitting .304, but with just 15 homers and 75 RBIs.

“I’m a White Sox now and I’ll be a White Sox tomorrow,” Abreu said through a translator, “What’s going to happen after that, we’ll see.”

White Sox: All-Star SS Tim Anderson, out since Aug. 6, said the injury to his left middle finger that required surgery has inhibited his hitting more than fielding. “I just couldn’t get back where I need to be, so we just kind of eased off and kind of shut it down,” Anderson said. “Swinging the bat bothered me a little bit.” Anderson expects to be back at 100% for spring training.

Inflation eases in Europe, but still in double digits

Tyson Fury vs Derek Chisora undercard: Who is fighting…