BEN WHITE has been declared FIT for Arsenal’s trip to Brentford on Sunday by Mikel Arteta after he was snubbed in Gareth Southgate’s latest England squad.

It was rumoured that the 24-year-old was omitted from the Three Lions’ Nations League matches against Italy and Germany due to injury.

It is the last chance that White will have the chance to impress Southgate in person before the World Cup begins in November.

But Gunners boss Arteta has rubbished the injury claims as he stated that the ex-Brighton defender is available for this weekend’s clash against the Bees.

Speaking in his pre-match press conference, the Spaniard was asked whether White is fit to face Thomas Frank’s side. 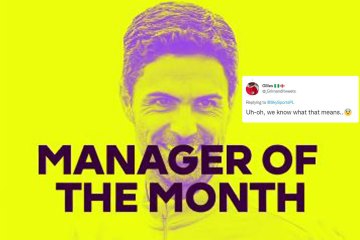 Pressed on whether White is only available due to his form, Arteta replied: “Yeah, yeah. He’s fit.”

Primarily a centre-back, White has starred at right-back in Arsenal’s opening six Premier League games due to William Saliba and Gabriel’s partnership in the heart of defence.

And Arteta has insisted he cannot understand why Southgate wouldn’t want someone with White’s versatility in his squad.

“I think if you have a versatile player who can play at the level Ben can as both a central defender and full-back, in my opinion, that’s something any manager would want, especially when you go to a tournament where a lot of things can happen.

“But that’s Gareth’s decision and his coaching staff.

“What I can tell you is that whenever Ben gets the call he’ll be ready.”

Arteta added: “Gareth picks the best team, the best squad that he believes is for now. it doesn’t mean it’s going to be the case in November.

“The squad that they have is incredible and everything that we can do to help Ben we are trying to do.

“I think Ben is giving a lot of reasons to be selected and that’s all we can do.”