ARSENAL are reportedly looking to steal a march on Manchester United in the race to snare Lisandro Martinez away from Ajax.

The 24-year-old is a target for the two Premier League sides as the race hots up to secure the services of the Argentina international.

Mikel Arteta’s side have already had a £25million approach for the centre-back turned down by the Eredivisie champions.

Meanwhile the Red Devils have identified the 2021 Copa America winner as an alternative for his Ajax team-mate Jurrien Timber.

It had been claimed that the Dutchman was set to be reunited with former boss Erik ten Hag at Old Trafford, only for him to snub a switch following talks with Holland gaffer Louis van Gaal.

And if United aren’t fast enough, they could miss out on Martinez’s signature with the Gunners opening new negotiations with his representative. 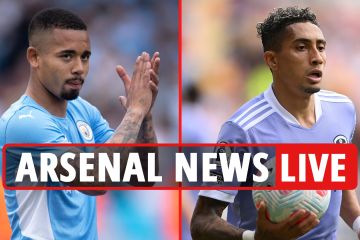 Arteta is a huge admirer of Martinez’s versatility, with the defender also able to operate as a left-back and defensive midfielder.

And transfer guru Fabrizio Romano has delivered an update on the Spaniard’s pursuit of the ex-Newell’s Old Boys ace.

“They had new contacts with his agent and after an opening bid was turned down by Ajax.

“But at the moment, still no fresh bid. Arsenal are on it.

Should Martinez join Arsenal, he will provide competition for left-sided centre-back Gabriel Magalhaes.

And he would also likely provide cover for left-back Kieran Tierney with back-up Nuno Tavares subject to a loan bid from Marseille.

Xi to attend Hong Kong anniversary but no word on visit