HECTOR BELLERIN’S agent is reportedly pushing for Arsenal to release the right-back in order for him to return to Real Betis.

The 27-year-old starred on loan at his boyhood club last season where he featured in 32 games in all competitions.

He even helped the Seville outfit win the Copa del Rey, which was the club’s first major trophy in 17 years.

Bellerin has made no secret of his desire to return to Betis having posted an emotional letter to their fans in May.

The Spain international even broke down in tears after their last home game of the 2021-22 season.

With the player having no intention to see out the final year of his contract at the Emirates, an exit is on the cards. 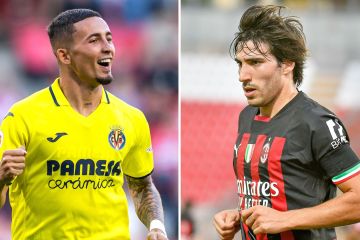 Bellerin is one of seven Arsenal players up for sale, but Betis are claimed to be unwilling to fork out a fee.

They are instead hoping the Gunners and Bellerin agree to mutually terminate his contract.

According to El Chiringuito, his agent Albert Botines will be speaking with Arsenal to agree to release him.

It has been claimed that Botines will be heading into London this week to discuss his future.

And Arsenal could agree to his demand to get Bellerin’s £110,000-a-week wages off their books if they are unable to get a fee for the ex-Barcelona academy ace.

The Spanish news outlet has also stated that Betis would then be ready to snap him up on a free transfer.

They are prepared to offer him either a three or four-year deal at the Estadio Benito Villamarin.

Bellerin is not in the plans of former team-mate Mikel Arteta, with the defender not named in their matchday squad for Friday’s 2-0 win against Crystal Palace.

Takehiro Tomiyasu and Cedric Soares are ahead of Bellerin in the pecking order, with centre-back Ben White even preferred instead to cover at full-back.