ARSENAL have been joined by Liverpool in the race to sign Aston Villa midfielder Douglas Luiz, according to reports.

The Gunners tried to sign the 24-year-old in the latter stages of the summer transfer window amid a midfield injury crisis.

However, Arsenal were unable to land boss Mikel Arteta’s target.

And now they could face competition from Liverpool for Luiz’s signature in future transfer windows.

According to The Express, the Reds registered their interest in the summer, like Arsenal.

But no official move was made for the Brazil star, who has less than 12 months on his contract. 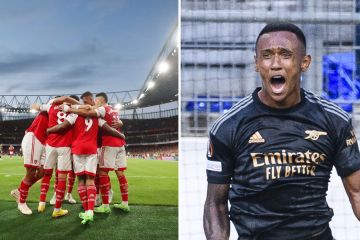 Despite signing Juventus’ Arthur Melo on loan, Liverpool could revisit Luiz in January.

And midfielder Alex Oxlade-Chamberlain could be used as bait to tempt Villa into selling before they lose him for FREE next summer.

A move to play under former England team-mate Steven Gerrard at Villa could be an exciting prospect for Oxlade-Chamberlain.

Ox has previously admitted Gerrard is his “idol”.

He said while playing for Arsenal in 2017: “I’ve always wanted to be Steven Gerrard, so I’ve still got a hope of that.”

Oxlade-Chamberlain has had his fair share of injury struggles over the years.

And the Liverpool ace is currently enduring a spell on the sidelines with a hamstring injury.

He is yet to make a first-team appearance for Jurgen Klopp’s side this term.