ARSENAL are set for a transfer firesale as manager Mikel Arteta confirmed plans to trim his bloated squad.

The Gunners are currently out in America for pre-season with new signings Gabriel Jesus and Oleksandr Zinchenko present.

But Arteta has admitted there will be outgoings this summer as he looks to free space in his side.

He said: “We have to. We have a big squad and now we have to make things happen.

“We have to make some decisions on the players that we’re not going to be using consistently and be fair with them.

“That’s a process that is going to start very soon.” 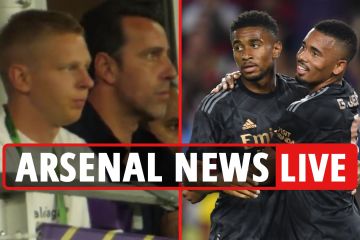 SunSport revealed in July that Arsenal aimed to offload SEVEN players to fund their spending in the summer sales.

Fulham have shown an interest in Leno, who could be swayed by the opportunity to stay in the capital by the newly-promoted side.

But Arsenal are believed to have rejected an opening £10million bid by the Londoners for their German No2.

Right-back Bellerin, who spent last season with real Betis, also looks set to leave permanently as the Spaniards plan for an offer.

Midfielder Torreira was linked with a move to Valencia amid rumoured talks with Valencia.

The futures of Nelson – who scored against Orlando in Arsenal’s most recently friendly – and Maitland-Niles remains in doubt.

Key gas pipeline from Russia to Europe restarts after break