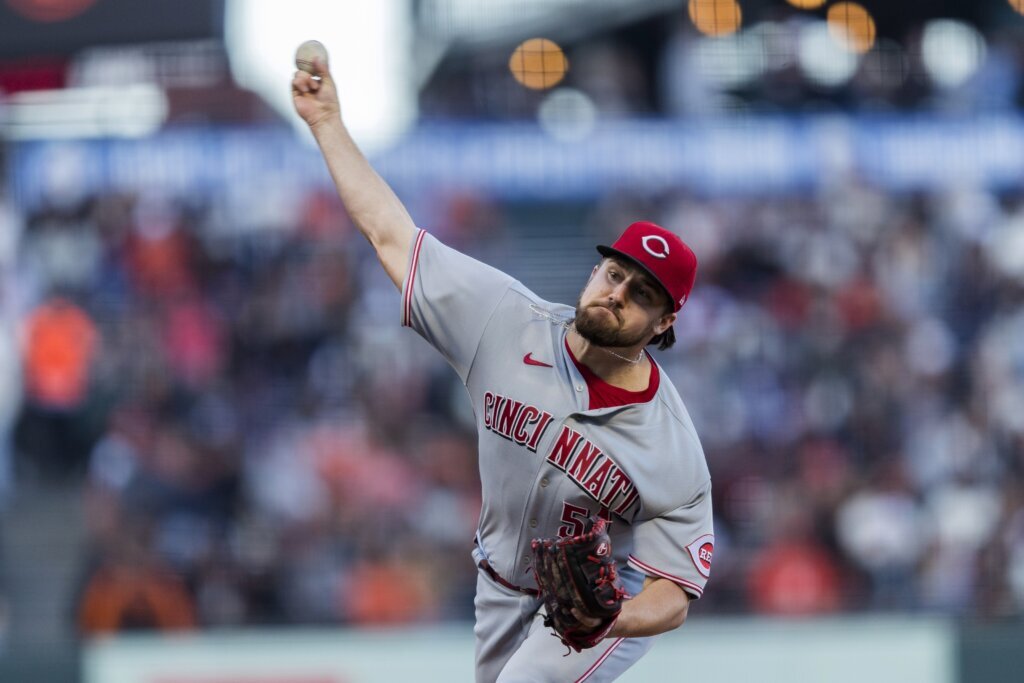 Ashcraft (4-1) faltered only in the fourth inning, when Evan Longoria belted a two-out homer, and in the eighth — when Mike Yastrzemski lashed an RBI single. That followed a double-play comebacker Ashcraft induced from Tommy La Stella to dampen a potential Giants rally.

Hunter Strickland worked the ninth against his former team for his third save.

Ashcraft permitted six hits and walked none while striking out eight. He gave up 10 runs and 17 hits over 9 2/3 innings in his previous two starts.

Cincinnati opened the scoring with two runs in the second off starter Alex Cobb (3-3). Kyle Farmer reached on an infield single and scored on Moustakas’ double. Senzel also doubled to knock in Moustakas.

Senzel and Jonathan India executed a double steal to set up a run-scoring groundout by Donovan Solano in the fifth. That was the final run charged to Cobb, who went 4 1/3 innings. He allowed three runs, two earned, and five hits while walking one and striking out four.

Moustakas doubled again in the sixth off left-hander Jake McGee and came home on Senzel’s single.

Littell yielded three runs in four innings spanning his last two appearances, including a 40-pitch stint in the second one.

“Zack has pitched a lot for us, and this last outing was relatively taxing,” Giants manager Gabe Kapler said. “I don’t think it’s any secret we want to be in a position to protect our bullpen, and today we felt we needed to get an arm on the roster that could give us two, two-plus innings if necessary.”

Reds: Placed RHP Jeff Hoffman on the injured list and recalled RHP Jared Solomon to fill his spot. … LHP Nick Lodolo (low back strain) is scheduled to make his fourth rehab appearance Wednesday for Triple-A Louisville at Toledo. “He’s going to make one more start and then be back the first week of July as a starter with us,” manager David Bell said. “Around the 4th or 5th if everything goes well next time out.”

Giants: SS Brandon Crawford returned to the lineup. He exited Tuesday’s game at Atlanta with a bruised left knee following a collision with catcher Travis d’Arnaud. … OF LaMonte Wade Jr. went 2 for 5 with a double, a home run and two RBIs as the DH with Triple-A Sacramento in a rehab game Thursday. He was expected to play the outfield for seven innings Friday. “We’ve seen with LaMonte that we want him to feel confident in his performance and his health,” Kapler said. “And when we bring him back to the major league level, we want him to feel like he can do everything he needs to do on the baseball field without any restrictions. And so we’re going to be patient with that.”