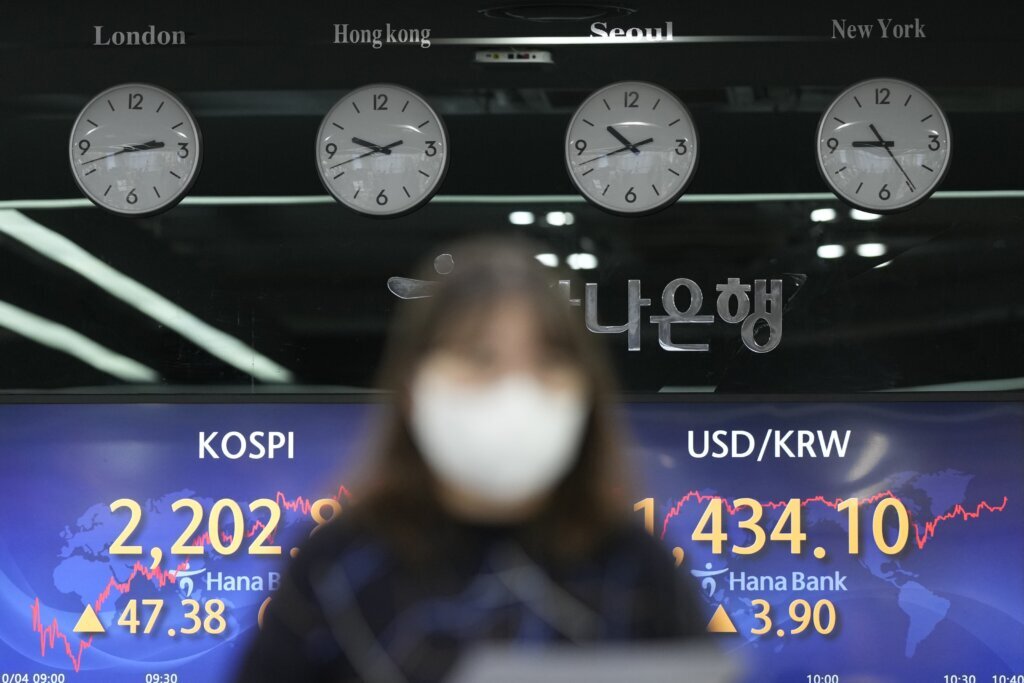 TOKYO (AP) — Asian shares rose Tuesday, encouraged by a rally in U.S. shares after some weak economic data raised hopes that the Federal Reserve might ease away from aggressive interest rate hikes.

Australia’s S&P/ASX 200 jumped 3.8% to 6,699.30 after its central bank boosted its benchmark interest rate for a sixth consecutive month to a nine-year high of 2.6%. The Reserve Bank of Australia’s increase of a quarter percentage point to the cash rate was smaller than those at recent monthly meetings.

When the bank lifted the rate by a quarter percentage point at its board meeting in May, it was the first rate hike in more than 11 years. It’s now at its highest point since August 2013, when the bank cut the rate from 2.75% to 2.5%.

Markets in Hong Kong and Shanghai were closed for holidays.

“Asian equities were positive on Tuesday after a corrective session as traders eye potentially oversold market conditions,” Anderson Alves at ActivTrades said in a report.

On Monday, Wall Street soared to its best day in months in a widespread relief rally after some unexpectedly weak data on the economy raised the possibility that the Federal Reserve won’t have to be so aggressive about hiking interest rates.

The S&P 500’s leap of 2.6% to 3,678.43 was its biggest since July, the latest swing for a scattershot market that’s been mostly falling this year on worries about a possible global recession.

Stocks took their cue from the bond market, where yields fell to ease some of the pressure that’s been battering markets this year. The yield on the 10-year Treasury, which helps set rates for mortgages and many other kinds of loans, fell to 3.62% from 3.83% late Friday. It got as high as 4% last week after starting the year at just 1.51%.

A report on U.S. manufacturing came in weaker than expected, along with data showing a drop off in construction spending from July to August. That may seem discouraging, but could mean the Federal Reserve can ease off on raising interest rates to beat down the high inflation damaging households’ finances.

By raising rates, the Fed is making it more expensive to buy a house, a car or most anything else purchased on credit. The hope is to slow the economy just enough to starve inflation of the purchases needed to keep prices rising so quickly.

The Fed has already pulled its key overnight interest rate to a range of 3% to 3.25%, up from virtually zero as recently as March. Most traders expect it to be more than a full percentage point higher by early next year.

But stresses are building in financial markets and corporate profits have weakened as central banks around the world hike rates in concert.

The yield on the two-year Treasury, which more closely tracks expectations for Fed action, fell to 4.11% from 4.27% following the weaker-than-expected reports on the economy.

Besides stocks, lower rates also boost prices for everything from cryptocurrencies to gold, which can suddenly look a bit more attractive when bonds are paying less in income.

Stocks of high-growth companies and particularly risky or expensive investments have been the most affected by changes in rates. Bitcoin rallied Monday with the reprieve in yields, while technology stocks did the heaviest lifting to carry the S&P 500. Apple and Microsoft both rose more than 3%.

Monday’s rally came despite an 8.6% drop for Tesla, one of the most influential stocks on Wall Street because of its massive market value. The maker of electric vehicles delivered fewer vehicles from July through September than investors expected.

The latest update on the U.S. jobs market comes on Friday. Along with reports on inflation, the jobs report is one of the most highly anticipated pieces of data on Wall Street each month.

It will be the last jobs report before the Fed makes its next decision on interest rates, scheduled for Nov. 2. Continued strength would give the central bank more leeway to keep hiking. Traders say the likeliest move is a fourth straight increase of a whopping three-quarters of a percentage point, triple the usual move.