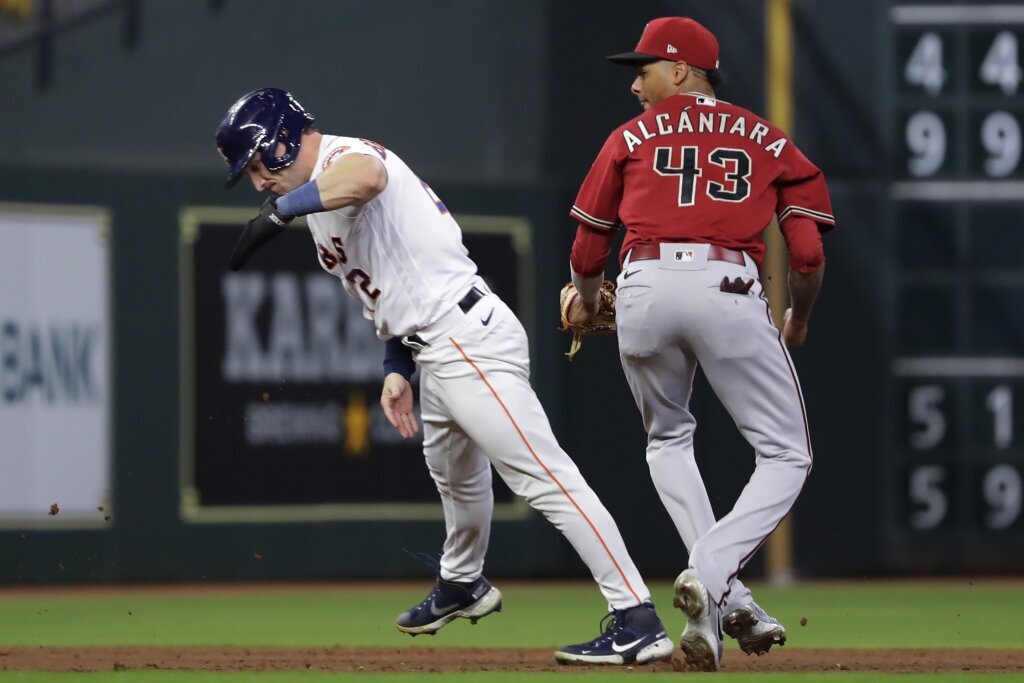 HOUSTON (AP) — The Houston Astros lost out on an opportunity to clinch the top seed in the AL when Christian Walker capped Arizona’s three-run 10th inning with a two-run single, sending the Diamondbacks to a 5-2 victory Wednesday night.

With the loss and the New York Yankees’ 8-3 win at Toronto, the Astros’ magic number to clinch the AL’s top seed remained at one.

Carson Kelly started the Arizona 10th on second and advanced when Geraldo Perdomo led off with a bunt single against Will Smith (0-3). Kelly then scored when Daulton Varsho bounced to second for a fielder’s choice.

With two out and runners on second and third, Walker made it 5-2 with a liner to left that drove in Varsho and Jake McCarthy.

Gallen has surrendered three or fewer runs in 14 straight starts.

Reyes Moronta (2-1) escaped a bases-loaded jam in the ninth to earn the win. Mark Melancon pitched the 10th for his 18th save.

Houston wasted another solid performance by Justin Verlander, who struck out eight in seven innings. The 39-year-old right-hander, one of the front-runners for the AL Cy Young Award, was charged with two runs, one earned, and six hits.

Verlander, who remained at an AL-best 17 wins, has allowed two or fewer runs in five straight starts, lowering his major league-leading ERA to 1.80.

Arizona scored two in the first. Varsho scampered home on a passed ball, and Pavin Smith scored on a Walker sacrifice fly.

Chas McCormick hit a two-run homer for Houston in the fifth.

The Diamondbacks recalled right-hander Sean Poppen from Triple-A Reno to take the place of righty Luis Frias, who was optioned after Tuesday’s game.

Arizona third baseman Josh Rojas and manager Torey Lovullo were ejected by umpire Alan Porter in the sixth for arguing balls and strikes after Rojas struck out looking to end the inning and slammed his bat down. Sergio Alcántara replaced Rojas at third.

Astros: DH Yordan Alvarez was out of the starting lineup after leaving Tuesday’s game with left ankle discomfort. Manager Dusty Baker said Alvarez was sore and would come in for treatment on Houston’s off day on Thursday with the hope he might play on Friday. … RHP Lance McCullers Jr. was feeling better but was still out due to an illness, Baker said. … OF Michael Brantley (right shoulder) said he should be back to doing baseball activities by the start of spring training. Brantley, who is on the 60-day injured list after having season-ending shoulder surgery, is eligible for free agency after the season. He said he would like to return to the Astros.

Diamondbacks: After a day off Thursday, RHP Merrill Kelly (13-7, 3.13 ERA) will start Friday in the series opener at the Giants.

Astros: Begin a three-game series Friday at home against the Rays. The Astros have yet to name a starter.