At UN, Truss aims to show UK can still lead on world stage 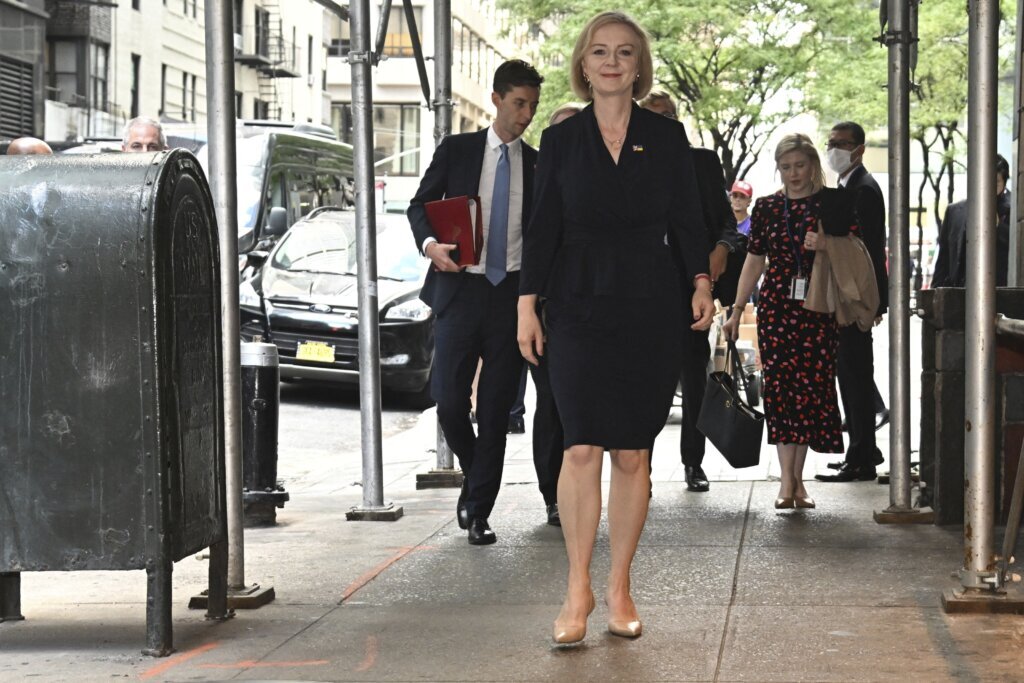 UNITED NATIONS (AP) — British Prime Minister Liz Truss, a politician often compared to “Iron Lady” Margaret Thatcher, is presenting herself to the world as a steely leader for tough times.

The new prime minister has come to the United Nations to argue that in an increasingly unstable world, like-minded allies need to band together against “those who seek to weaponize the global economy.”

In her speech to the U.N. General Assembly in New York on Wednesday, Truss will call on bodies like the Group of Seven industrialized nations to act as an economic equivalent of NATO, helping one another endure the economic shocks unleashed by Russia’s invasion of Ukraine.

“The story of 2022 could have been that of an authoritarian state rolling its tanks over the border of a peaceful neighbor and subjugating its people. Instead, it is the story of freedom fighting back. … But this must not be a one-off.”

Two years after Britain dismayed many of its allies by leaving the European Union, Truss wants to reassure the world that her country will be “a reliable, trustworthy and dynamic partner” to fellow democracies – most urgently, to Ukraine. She’ll pledge Britain’s “total” commitment to Ukraine’s fight against invasion, including a further 2.3 billion pounds ($2.6 billion) in U.K. military aid.

Truss plans to overhaul Britain’s security and foreign policy blueprint, which was updated just last year, before Russia’s invasion of Ukraine upended global security. She also has pledged to increase defense spending to 3% of gross domestic product, from its current level of just over 2%.

Truss also said en route to New York that Russia will only be freed from international sanctions if it pays “recompense” over its invasion. She did not elaborate, but American officials are looking at whether assets seized from wealthy Russians could be used to fund Ukraine’s reconstruction.

It all adds up to a bold start for a leader in office for just two weeks. Truss won a Conservative Party leadership contest early this month and was appointed prime minister by Queen Elizabeth II on Sept. 6, just two days before the monarch died. The first days of Truss’s term have been shrouded by a period of national mourning, so the trip to the U.N. represents the debut of both her international aims and her domestic agenda.

Truss is a stolid orator, so her speech is unlikely to contain the fireworks of her voluble predecessor Boris Johnson, who left his UNGA audience bemused in 2019 with a speech about technology that mentioned “terrifying limbless chickens” and “pink-eyed Terminators from the future.”

She is aiming to catch the mood of a pivotal global moment, as Thatcher did in 1989, when she hailed the thawing of the Cold War but issued a prescient warning about climate change. Thatcher said humans were not “the lords of all we survey,” but “the Lord’s creatures, the trustees of this planet, charged today with preserving life itself.”

Or like Prime Minister Gordon Brown in 2009 warning it would be “a failure of global responsibility” if the world’s poorest countries did not share in the global recovery from the Great Recession – an entreaty that went largely unheeded.

Before Truss gives her speech, she’ll hold her first meeting as prime minister with President Joe Biden. The two leaders have different economic views, with Truss advocating a brand of low-tax free-market policies derided by Democrats like Biden as “trickle-down economics.”

The two countries’ common approach to Ukraine has gone some way to healing a trans-Atlantic rift caused by Brexit. Truss’s hawkish statements about “China’s increasing assertiveness” and calls for Western allies to cut their reliance on Russian oil and gas also vibe with the views of the American leader.

But Brexit, and its impact Northern Ireland’s peace process, has driven a wedge into what both sides sentimentally call the U.K.-EU “Special Relationship.”

Britain’s departure from the EU has brought new customs checks and paperwork for Northern Ireland trade, part of the U.K. that shares a border with EU member Ireland. The issue has spiraled into a political crisis for the power-sharing government in Belfast, for which the U.K. and the EU blame each other.

Britain has introduced legislation to rip up part of its Brexit treaty with the EU — a move that angered the bloc and alarmed Washington. The proudly Irish- American Biden has warned that no side should do anything to undermine the 1998 Good Friday Agreement, the cornerstone of Northern Ireland’s peace process.

Concern about Northern Ireland in the U.S. administration and Congress is one reason talks on a U.K.-U.S. free trade deal – long held up by British Conservative politicians as one of the prizes of Brexit – have stalled. Truss acknowledged Monday that there is no prospect of such a deal “in the short to medium term.”

Truss told reporters aboard her plane that “my preference is for a negotiated settlement. … But what I will not allow is for this situation to drift.”

Truss has avoided stirring up the issue during meetings with French President Emmanuel Macron and others in New York. But Biden security adviser Jake Sullivan said it was on the agenda for the meeting of the two leaders on Wednesday.

“But that can only be part of the conversation when they meet in New York,” Darroch told British broadcaster LBC. “And the Northern Ireland Protocol will be part of it as well. And I suspect (it will be) quite difficult.”

London-based AP correspondent Jill Lawless is on assignment traveling with the British prime minister to cover the U.N. General Assembly. Follow her on Twitter at http://twitter.com/JillLawless