India’s auto sector – barometer of the country’s economy – demonstrated healthy growth rising to record levels in August year-on-year as shortage of semiconductors eased further helping companies to step up production ahead of the crucial festive season that kicked in with Ganesh Chaturthi on Wednesday. New model launches in the SUV segment also helped keep the demand in the fast lane.


Dispatches at India’s top seven passenger vehicle makers rose 30.2 per cent year-on-year to 3,05,744 units from 2,34,743 units, shows the monthly sales data released by the companies on Thursday. This is the sharpest year-on-year growth seen in the current fiscal with the exception of May when the growth came on last year’s low base.


Auto firms in India count dispatches to dealers as sales. With the onset of festive season which typically perks up the demand, sales are expected to remain robust in the coming months. Ahead of the festive season, auto companies step up the demand.


Shashank Srivastava, executive director sales at Maruti Suzuki expects the industry to end fiscal 2022-23 with a record 3.7 million units, which would be almost 21 per cent more than FY21.


Maruti dispatched 134,166 units in India in August, marking a 30 per cent growth over the corresponding month a year ago.


“The (growth) trend seems to be strong. However, going forward, it all depends on how production pans out against the underlying demand. The chip shortage situation has become much better but there are still some uncertainties, especially for specific car models,” said.


The sales of Maruti Suzuki’s compact cars such as Baleno, Celerio, Dzire and Ignis increased 57 per cent in August 2022 to 71,557 units.


Srivastava added that the sales trend of the current month indicates that while the growth momentum continues in the SUV segment it has plateaued out in the sedan segment. As on Thursday, the pending bookings at Maruti Suzuki stand at 377,500 units. The bookings for new models launched — Grand Vitara and new Brezza — stand at 50,000 and 106,000, respectively, he added. 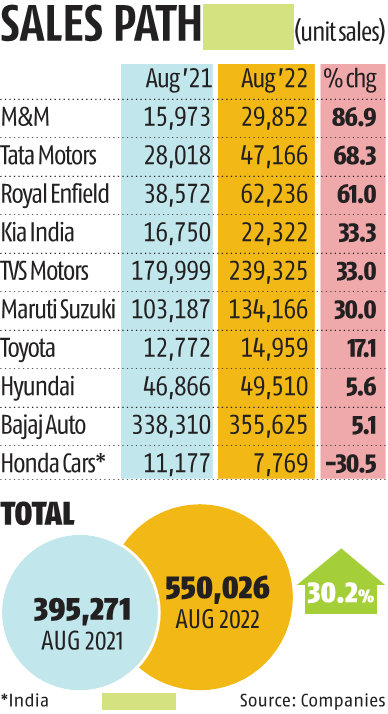 
PV sales at Tata Motors, the third largest in the pecking order, continued the strong run of the previous months and jumped 68.3 per cent year-on-year to 47,166 units in August this year. Sales at Kia Motors advanced at a brisk pace with an year-on-year increase of 33.2 percent to 22,322 unit.


Meanwhile, new SUV launches kept up the momentum at Mahindra and Mahindra with sales advancing at a brisk pace by 87 per cent to 29,852 units over the corresponding month last year. Veejay Nakra, president, automotive division said the demand across its product portfolio remains strong with Scorpio-N, Scorpio Classic and Bolero MaXX Pik-up driving the volumes.


“With the improving availability of semiconductor chips, there is an expectation of a lower waiting period in the coming months. The average inventory days, as per a FADA report, stood at 20-25 days for July 2022,” Care Edge said in a recent report.


Sales at Toyota Kirloskar Motor also increased by 17.12 per cent to 14,959 units in August over the same period last year.


The company on Tuesday said it is temporarily stopping to take orders for Innova Crysta’s diesel variant as there is a huge demand for it, leading to a longer waiting period.


Meanwhile, though on a low base, sales at the two wheeler companies also showed an uptick in August y-o-y as companies dispatched higher numbers ahead of the festive season. An easing chip shortage also helped the companies produce more.