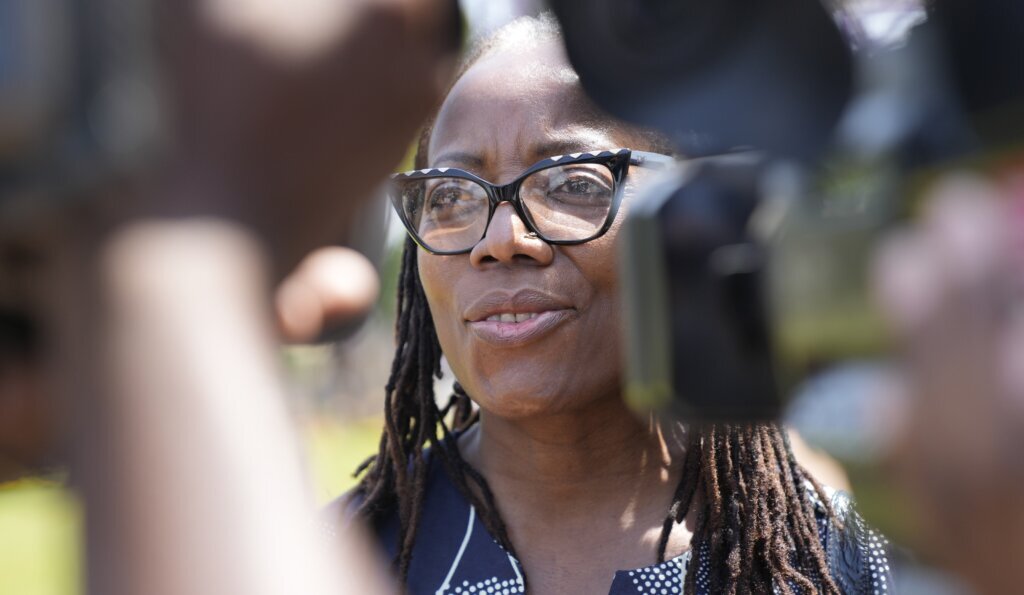 HARARE, Zimbabwe (AP) — World-renowned author Tsitsi Dangarembga was found guilty Thursday of promoting public violence in her home country of Zimbabwe for participating in a largely peaceful antigovernment protest in 2020 that called for reforms.

She was fined around $120 and given a six-month suspended jail sentence.

Dangarembga and her friend, Julie Barnes, were arrested after walking down a street in a suburb of the capital, Harare, holding placards. Dangarembga’s placard read “We Want Better. Reform Our Institutions” and Barnes held one that called for arrested journalists to be freed. They were part of a low-key, antigovernment demonstration but were arrested and detained along with several others who were also taken to court.

Rights groups had criticized the charges against Dangarembga, an award-winning writer and filmmaker, as part of President Emmerson Mnangagwa’s attempts to silence opposition in the long-troubled southern African country.

Dangarembga, 63, said she would appeal her conviction.

“I am not surprised by the verdict because we are in a situation where media freedom is not encouraged,” she said outside the courthouse. “So this means the space for freedom of expression is shrinking and is being criminalized.”

Mnangagwa, who was instrumental in forcing out Zimbabwe’s autocratic former President Robert Mugabe in 2017, has been accused of responding with force to any criticism ahead of a presidential election next year.

Zimbabweans initially welcomed the change of no longer living under Mugabe’s 37-year rule. But under Mnangagwa’s leadership, dozens of people — opposition supporters, political activists, journalists, church leaders, trade union members and student leaders — have been arrested and brought to court on charges that legal experts say amount to harassment and are reminiscent of the Mugabe days.

Dagarembga and Barnes argued in court that they were merely exercising their right to freedom of expression.

The judge, Magistrate Barbara Mateko, disagreed and ruled the pair were intent on provoking violence.

“Clearly they wanted to pass a message. It was not peaceful at all,” Mateko said in her judgment. “They were expressing opinions and it was meant to provoke.”

Dangarembga was the first Black woman to win the prize and was praised by the award’s judges as “not just one of her country’s most important artists but also a widely audible voice of Africa in contemporary literature.”

They pointed to her commitment to promoting culture, human rights and political change in Zimbabwe.

“Nervous Conditions” won the Commonwealth Writers’ Prize in 1989 and is widely acknowledged as one of the finest books by an African author. “This Mournable Body” was shortlisted for the Booker Prize for fiction in 2020, a few months after Dangarembga was arrested.