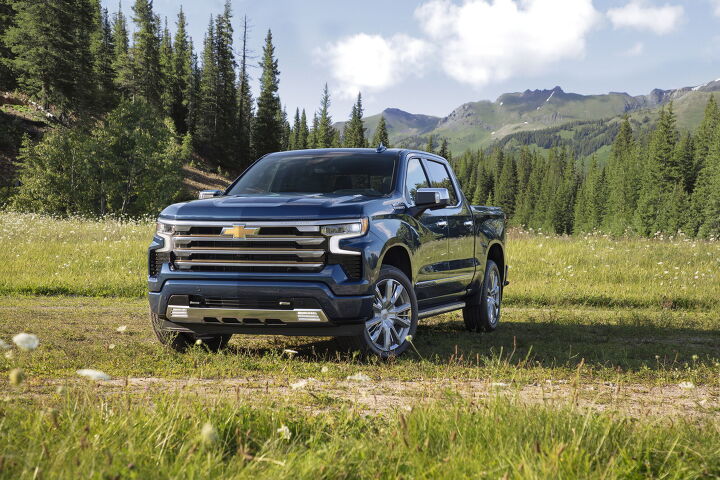 If recent global events have taught us anything about the auto industry, it’s that unpredictability is the new norm. Gone are the days when one could confidently muse about the fortunes of one brand over another, replaced by erratic parts shortages and inconsistent volume of supply.

Still, some are weathering the storm better than others.

Through to the third quarter of this year, just about every brand is off their performance numbers of the same time frame one annum ago, save for low-volume brands whose numbers are easy to skew plus an odd aberration at Chrysler. It is worth remembering that 2021 was no picnic for some companies, making these year-to-date losses a doubly difficult pill to glutch down the gullet.

Witness the yo-yo that is General Motors, for example. Off by roughly 7 percent so far this year, its volume skyrocketed last quarter by nearly&nbsp;25 percent, a number heretofore unheard of for a company of its size. Recorded sales were up massively at all brands save Buick, which put a damper on the party by going into the red by almost thirty percent compared to this time last year. So far in 2022, the tri-shield brand is down almost half to just over 76,000 vehicles. For you, dealer wonks in the B&B, know that The General ended the third quarter with 359,292 vehicles in dealer inventory, including units in transit, an increase of 111,453 units from the previous quarter and nearly three times the inventory available at the end of the third quarter of 2021, back when COVID-related supply chain issues crucified production. 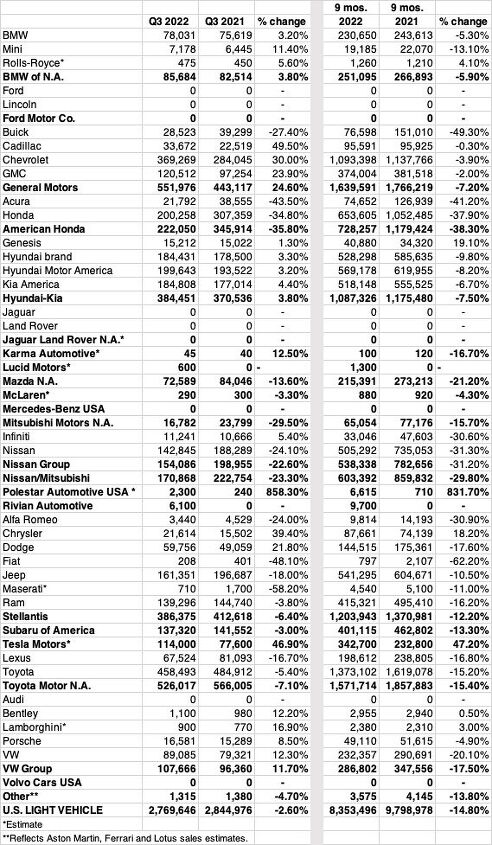 Sticking with the big guns, Toyota posted its first month-over-month increase since&nbsp;last summer, putting an exclamation point on the difficulties that the brand is having in straightening out its production lines. Your author’s local Toyota store is barren and bereft of new metal; he wagers the one in your town is in a similar state of affairs. Taken as an entire third quarter and year-to-date tabulation, however, the Big T is off by 7.1 percent and 15.4 percent respectively.

Talking heads at Honda are attempting to put a positive spin on things, yammering about ‘strong turn rates’ and maximizing available inventory. Still, one look at the numbers reveals that Honda shifted well over a million units by this time in 2021; this year – a skiff over 650,000. That’s a 37.9 percent drop. And if you’re wondering, Acura is off by 41.2 percent so far this year.

Where will this stick at year’s end? Analysts who were bullish back around President’s Day are now muttering about stagnating sales thanks to partial evaporation of any pent-up demand they assumed existed in the marketplace. Inflation, fuel prices, and rising interest rates are enough to put a dent in things; adding a wonky supply chain and parts issues seems to be exacerbating an already tough situation.

Become a&nbsp;TTAC insider. Get the latest&nbsp;news, features, TTAC takes, and everything else that gets to the truth about cars first by&nbsp; subscribing to our&nbsp;newsletter.

QOTD: That One Special Pothole

Toyota May Give the Land Cruiser Another Run in the U.S.

Elon Musk takes a dig at Joe Biden, advises him to just…