The Catalan giants have kicked off their European campaign with a 2-0 defeat to Bayern Munich and a 5-1 win over Viktoria Plzen.

Inter have also lost to Bayern and beaten Plzen, so the clash at the San Siro promises to be a pivotal one when it comes to both sides’ Champions League hopes.

It is three years since these two European giants faced off, with Barcelona going through a huge squad rejuvenation in that time.

Despite their financial crisis, players have continued to move in and out of the Nou Camp at a frightening pace.

And SunSport have identified that ALL 11 players who started away at Inter Milan in December 2019 are no longer at the club. 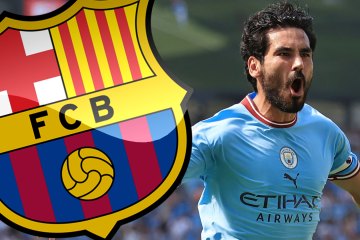 In goal was Brazilian keeper Neto – who is now plying his trade at Bournemouth.

The back three consisted of Clement Lenglet, Samuel Umtiti and Jean-Clair Todibo.

Todibo joined Nice last year, while Umtiti and Lenglet are out on loan at Lecce and Tottenham respectively.

Left wingback Junior Firpo is now at Leeds, while right wingback Moussa Wague joined Croatian side Gorica in the summer.

Ivan Rakitic is now at Sevilla after leaving Barcelona in 2020.

Arturo Vidal and Carles Alena are also no longer with the Spanish giants following transfers to Flamengo and Getafe.

Then up front, Barcelona played the pair of Antoine Griezmann and Carles Perez.

Griezmann has since gone back to Atletico Madrid on loan, while Perez joined Celta Vigo, before being loaned to Jose Mourinho’s Roma.

That Barcelona team did get the job done in 2019 as they beat Inter Milan 2-1 at the San Siro.

In fact, Inter have not beaten Barca in any of their previous five meetings – a run which stretches back to the 2009/10 Champions League semi-finals.

On that occasion, Inter won the first leg 3-1 before losing the return fixture 1-0 – a result which was enough to see them progress to the final.

They then went on to beat Bayern Munich 2-0 and lift the trophy for a third time.