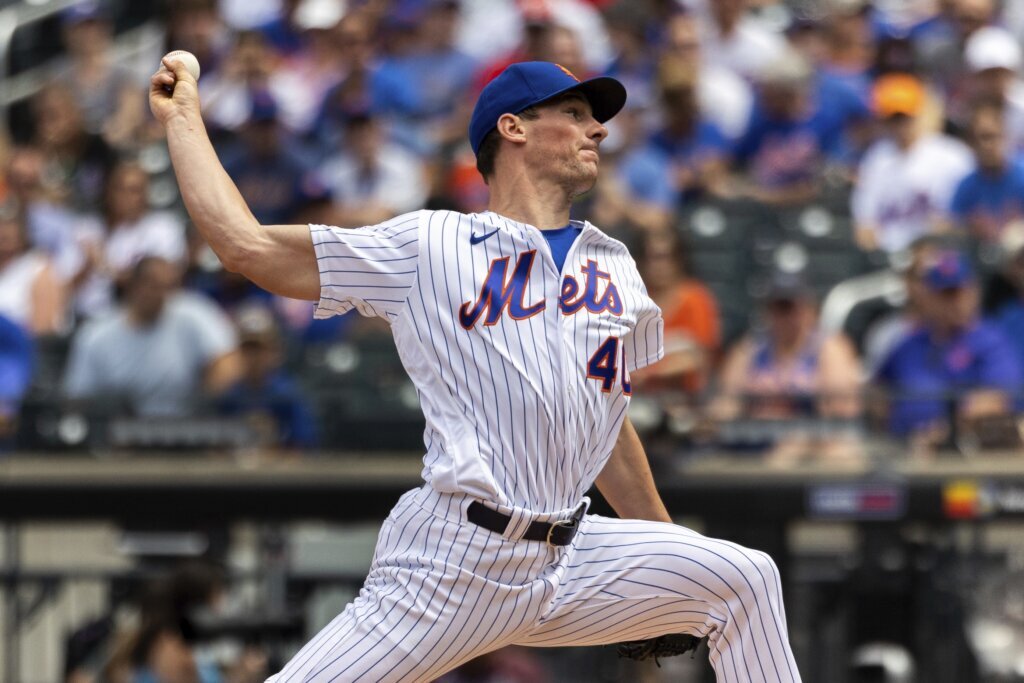 Burly slugger Daniel Vogelbach homered and Mark Canha had two hits for New York, which moved 35 games over .500 for the first time since the end of the 1988 season.

The Mets posted their second straight shutout and kept 5 1/2 games ahead of Atlanta atop the NL East. The Mets and Braves open a four-game series in Atlanta beginning Monday.

The Phillies have dropped three of four after winning seven straight.

After Mets aces Max Scherzer and Jacob deGrom combined to allow just a single run over 12 innings in the first two games of the series, Bassitt (10-7) took his turn keeping Philadelphia off the board.

The right-hander, who scattered four hits and struck out five, has gone 24 consecutive innings without allowing an earned run.

Lindor singled home Brandon Nimmo, who led off the Mets first with a double. It was Lindor’s 82 RBI, surpassing José Reyes’ total of 81 set in 2006.

Wheeler, who left the Mets as a free agent after the 2020 season, allowed six runs in six innings. He struck out five and saw his ERA climb to 2.92. He entered the game having allowed just 11 earned runs over his last seven starts (45 2/3 innings).

Phillies: OF Bryce Harper (left thumb fracture) will take batting practice Monday at Citizens Bank Park. Manager Rob Thomson indicated that the seven-time All-Star is progressing towards a rehab assignment. … OF Kyle Schwarber (strained right calf) was held out of the lineup for the second straight game … RHP Cory Knebel appeared to be hurt when he was removed in the seventh inning after throwing 14 pitches, only five of which were strikes.

Mets: INF Eduardo Escobar (left oblique) entered the game as a defensive replacement in the fifth. The switch-hitter batted lefty vs. left-hander Brad Hand to protect his tender side. … Guillorme (left groin tightness) came out of the game after scampering home on McCann’s single. He is scheduled to undergo imaging Monday.

Phillies: RHP Noah Syndergaard (6-8, 3.96 ERA) takes the mound for his third start after being acquired from the Angels at the trade deadline as Philadelphia opens a three-game series in Cincinnati. He’s 5-0 with a 2.11 ERA in six career starts against the Reds. He’ll be opposed by LHP Mike Minor (1-9, 6.24 ERA).