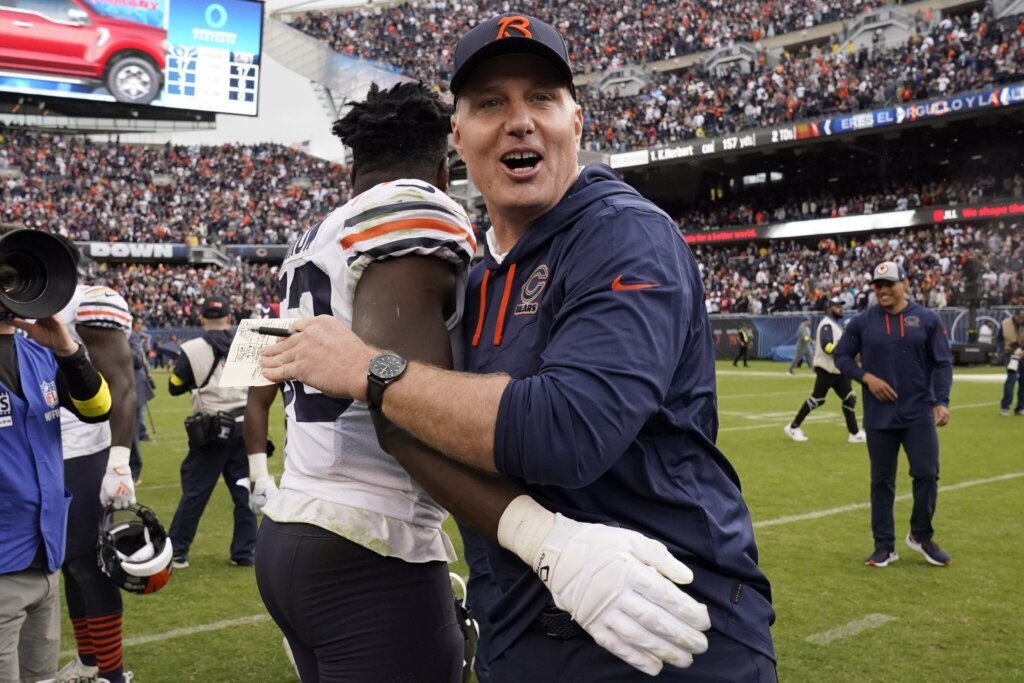 Barring a tie, one of them will improve to 3-1 when they meet at MetLife Stadium on Sunday.

A good start was something on the their rookie wish lists this season rather than the expectation. The Bears were 6-11 in 2021 under Matt Nagy, while the Giants went 4-13 under Joe Judge.

Two of the NFL’s oldest franchises, they hired new general managers and coaches. The Bears brought in Kansas City’s Ryan Poles as GM, and he hired Eberflus, the former Colts’ defensive coordinator. New York went to Buffalo for help, getting assistant GM Joe Schoen to run the organization and offensive coordinator Daboll to run the team.

They’ve had success heading into Sunday’s matchup. The Bears have wins over San Francisco and Houston and a loss to the Packers. The Giants opened with wins over Tennesee and Carolina and lost to Dallas on Monday night.

Eberflus and Daboll haven’t revealed much of substance regarding what has gone right. They have talked about continuing the process of learning, getting better week to week and fixing mistakes.

“Really it’s a function of guys being mindful of their practice,” Eberflus said. “That’s what we talked about in the team meeting today. You have to be mindful of the techniques and fundamentals you’re working on during the individual period and during the team periods.”

Daboll said he has been evaluating his team, his coaching staff and their decisions after every game.

Though the Bears rank second in the NFL in rushing, their passing game is grounded. The Bears are averaging a league-low 78.3 yards.

Fields threw for 106 yards and two ugly interceptions last week, but the Bears ran for 281 yards in a 23-20 win over Houston.

The Giants are hurting at the receiver spot with the season-ending ACL injury to veteran Sterling Shepard on Monday. He had 13 catches for a team-high 154 yards.

Kenny Golladay, who signed a $72 million contact last year, has two catches for 22 yards in three games. Kadarius Toney, the team’s No. 1 pick in 2021, and Wan’Dale Robinson, a second-round pick in May, are out again after missing last week with hamstring and knee injuries, respectively.

That leaves Richie James (14 catches for 146 yards), David Sills, Darius Slayton and a bunch of tight ends as the main targets for Daniel Jones.

The Bears are coming off their biggest rushing game since Walter Payton was taking handoffs in 1984.

They did it with Khalil Herbert carrying the load after David Montgomery left Sunday’s game with an ankle injury. The second-year pro came through with a career-high 157 yards on 20 carries, and he said he is “definitely” ready to carry the load again with Montgomery out this week.

New York’s lines had their problems against Dallas.

While the offensive line helped the running game pick up 167 yards behind Saquon Barkley (81) and Jones (79), the Cowboys put the quarterback under tremendous pressure. Jones was sacked five times and hit 12 times.

On the other side of the ball, Wink Martindale’s defense was shredded for 176 yards on 30 carries, a 5.9 yard average. It will be without top lineman Leonard Williams for the second straight week.

Missed tackles and confusion were obvious. Dallas’ Ezekiel Elliott scored on a 1-yard run on a play New York had 10 defenders on the field.

NOT GETTING OUT OF THE BLOCKS

The Giants hired Daboll because of the work he did with Josh Allen in Buffalo, making the Bills one of the NFL’s most explosive teams.

The Giants have a long way to go to match that. They have not scored a first-half touchdown in their three games, and the streak is at seven dating to last season. New York has scored nine points in the first half this season.

“I think we just got to do a better job starting off the game a little bit faster,” said offensive coordinator Mike Kafka, who worked with Poles in Kansas City last year. “The execution, preparation and all those things kind of tie in. That’s what we’re focusing on this week in practice.”