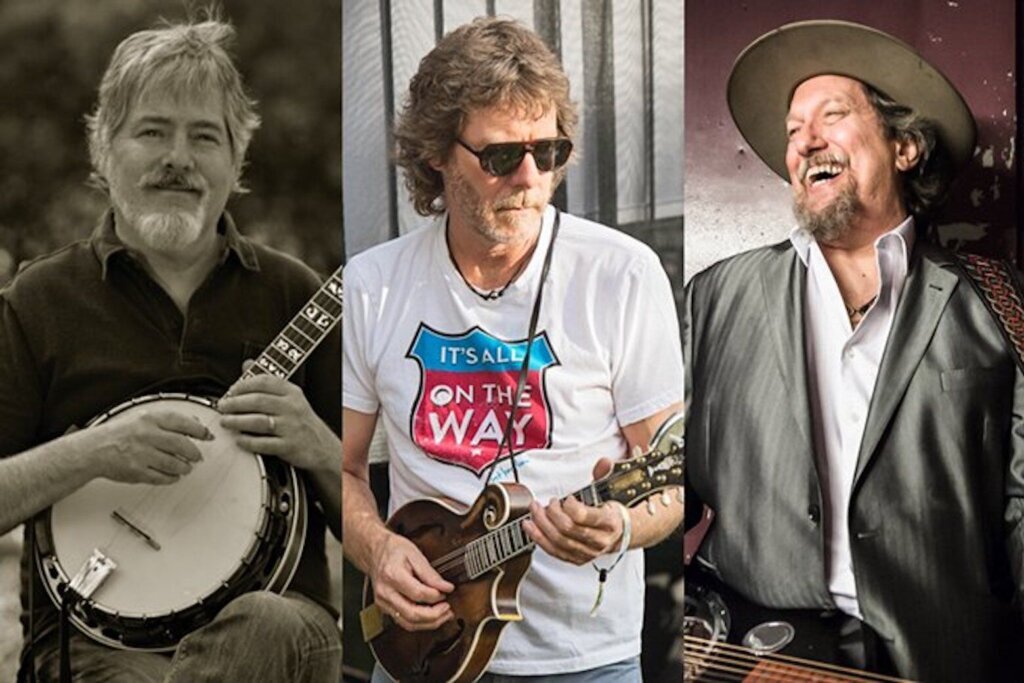 He’s won over a dozen Grammys in bands from New Grass Revival to The Flecktones.

“It’s just a pure joy from start to finish,” Fleck told WTOP. “People are playing their butts off, there’s no butts left anywhere on the tour. … They’re all ridiculously talented bands, one led by me, one by Sam Bush, one by Jerry Douglas. These are my pals back from the ’80s. … Everybody plays their music, but then we all get together [for] jams at the end.”

Fleck will be playing his latest Grammy-winning album “My Bluegrass Heart” (2021).

“I haven’t played bluegrass for a long time,” Fleck said. “Incredible band. … Bryan Sutton, the top guitarist of his generation; Sierra Hull, unbelievable mandolin player; Michael Cleveland, one of the greatest bluegrass fiddle players who ever lived; Mark Schatz playing bass; … and Justin Moses who plays every instrument better than the rest of us.”

Born in New York in 1958, Fleck recalls the first time he heard Earl Scruggs on the “Beverly Hillbillies” theme.

“Listen to that banjo, it’s no laughing matter,” Fleck said. “It’s such great playing, so grounded and earthy, yet so fast and crisp. … I’m really serious about music, so it’s funny that the thing that would turn me onto the banjo … was a silly, even insulting comedy, except the hillbillies were always smarter than the city slickers, so maybe not.”

He received his first banjo from his grandfather after hearing “Dueling Banjos.”

“The movie ‘Deliverance’ came out when I was about 14, so when I was 15, I went to see my grandfather up in Peekskill, New York and he bought a banjo,” Fleck said. “When I got the banjo I transformed from someone interested in music to someone obsessed with the banjo. … Three years later, I was at a level that I was joining professional bands.”

After attending the High School of Music & Art in New York City, Fleck moved to Boston to join a band called The Tasty Licks, with whom he recorded a pair of albums.

“I’m from New York City from the Upper West Side, so it’s pretty bizarre this is the life I’ve ended up with [as] a Yankee banjo player,” Fleck said. “After the Boston Tasty Licks band broke up. … [Schatz and I] used to play on the street in Harvard Square all summer just to make a living … but we moved together to Kentucky to live in the town of J.D. Crowe.”

He released his debut solo album “Crossing the Tracks” (1979) and formed the group Spectrum before bluegrass master Sam Bush asked him to join New Grass Revival.

“He remembered me and liked that I would dive off the deep end,” Fleck said. “If I didn’t know what I was doing, it wouldn’t stop me. … Some combination of this Yankee style of banjo playing and this J.D. Crowe, Earl Scruggs thing. … All of those rules that I learned about taste, time and tone stood me in good stead when I joined New Grass Revival.”

The band was utterly revolutionary in elevating the bluegrass genre.

“New Grass Revival was the progressive force on the bluegrass scene,” Fleck said. “New Grass Revival was very influenced by The Allman Brothers, The Grateful Dead, Led Zeppelin, blues singers, gospel music. They’d do a 20-minute jam based on a Japanese scale or Leon Russell. … They were hippie jazz weirdos, virtuosic, blues-oriented, jammy.”

In 1988, he veered closer to jazz by forming the group Bela Fleck and the Flecktones.

“Just a hybrid musical form that blended a lot of different things that had the banjo at the center of it but trying desperately not to be bluegrass,” Fleck said. “Trying to live in a jazz world was not easy to pull off because there are a lot of people against the idea. A lot of people in the jazz world didn’t quite remember that the banjo was an African instrument.”

He explored the banjo’s African roots in the documentary “Throw Down Your Heart” (2008), which chronicled Fleck’s travels to Africa to explore the history of his beloved instrument.

“Those instruments originated in West Africa and came over with the slaves,” Fleck said. “[America] is a place where … cultures can mix and find a way to coexist. Bluegrass is the story of that. You think of it as this very white instrument, but Bill Monroe was influenced by Black musicians in his area. … It’s multiracial music that has become typecast.”

Fleck’s genre-bending spirit earned New Grass Revival induction in the International Bluegrass Hall of Fame, while his Flecktones won the Miles Davis Award at the Montreal Jazz Festival. He’s compiled 15 Grammys and one Latin Grammy for a total of 16.

“It’s confusing because there’s a [Latin] Grammy that Chick Corea and I won,” Fleck said. “I said, ‘Do you count that as a Grammy?’ He said, ‘Yeah! I count this as a Grammy!’ So whenever someone asks me, I count the Latin Grammy, then people go, ‘On Wikipedia, it says 15!’ … I try to spread them around [the house] so they don’t intimidate the guests.”

IND vs IRE 2022: “It remains to be seen if Sanju Samson can be consistent”