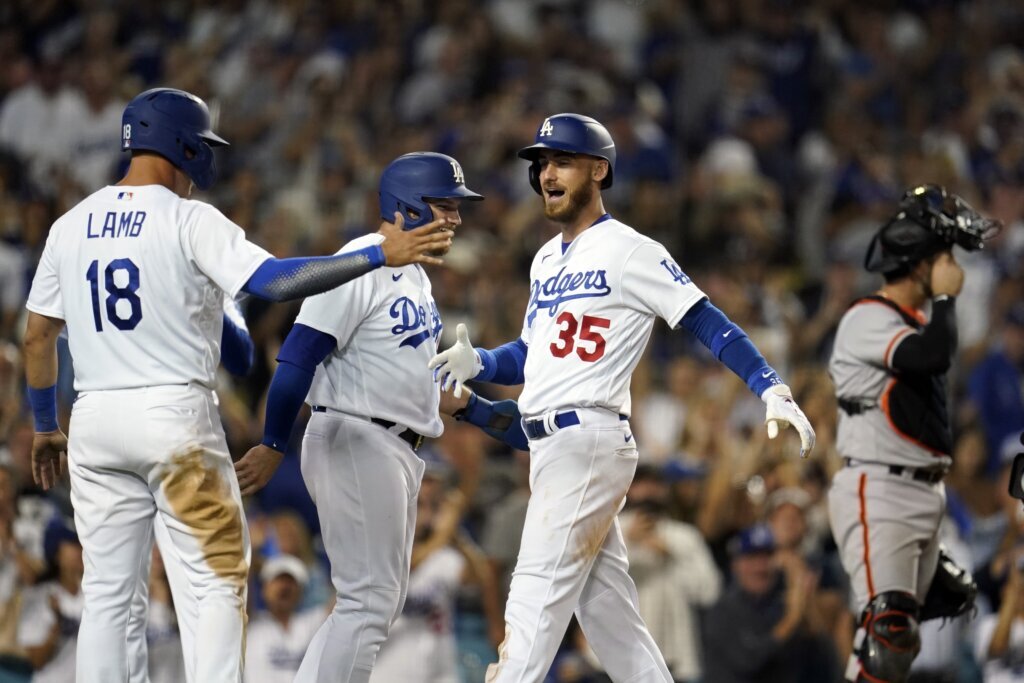 Bellinger connected on a curveball over the plate from Sam Long (1-3) with two outs and an 0-2 count for his seventh career grand slam.

Mookie Betts and Freddie Freeman each had two hits for the Dodgers, who are an NL best 32-13 at home this season.

Thairo Estrada had two hits for the Giants, who have dropped two straight after winning five of six before the All-Star break.

Freeman began the Dodgers’ eighth with a base hit to center field, advanced to second on a wild pitch and then moved to third when Giants first baseman LaMonte Wade Jr., who had just come into the game, booted Max Muncy’s ground ball with one out.

After Gavin Lux struck out, Jake Lamb was hit by a pitch to load the bases and set up Bellinger’s 12th homer of the season, which went into the stands in the right-field corner.

David Vesia (2-0), one of five Dodgers pitchers used, got the win.

Betts hit Logan Webb’s first pitch up the middle for a single and eventually scored when a bases-loaded walk was issued to Lux. The Dodgers were unable to add anymore runs in the first when Lamb popped out to third baseman Evan Longoria.

Tyler Anderson retired the first eight San Francisco hitters before Mike Yastrzemski beat the shift with a single to shallow left field in the third.

The Giants evened it in the fourth on Yermin Mercedes’ RBI single. The tying run was set up one batter earlier when Dodgers third baseman Muncy had a throwing error on a base hit by Estrada, which allowed Longoria to advance from first to third.

Anderson earned a $500,000 bonus for going over 100 innings. The lefty went six innings and allowed an unearned run on four hits and struck out six.

Anderson is the first Dodgers’ hurler to cross the century mark in innings this season.

Webb walked three straight batters in the first and threw 51 pitches the first two innings before settling down.

The right-hander ended up going six innings on 103 pitches. He gave up one run on five hits with two strikeouts and four walks.

Giants: Tommy LaStella (Covid) went 1 for 3 in the first game of a rehab assignment with Triple-A Sacramento.

Dodgers: 3B Justin Turner is sitting out the next couple days due to abdominal tightness. Manager Dave Roberts said he doesn’t think it is serious enough that Turner would need a stint on the injured list but also noted that Turner has not had it scanned.