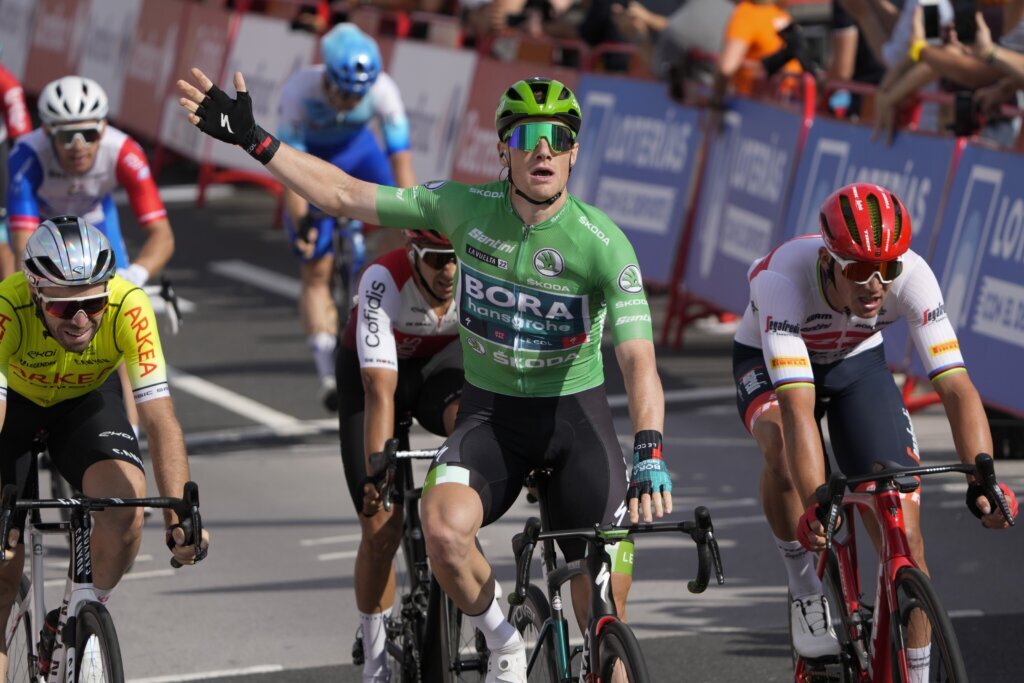 BREDA, Netherlands (AP) — Sam Bennett went two years without a stage win at a Grand Tour race. Now he has won two in a row.

The Bora-Hansgrohe rider prevailed in another sprint finish at the third stage of the Spanish Vuelta on Sunday, with Edoardo Affini taking the leader’s red jersey to keep his Jumbo-Visma team in position to help Primoz Roglic defend his title.

Affini is the third consecutive rider from the Dutch team to grab the overall lead during the Vuelta’s start in the Netherlands.

“It all started with winning the time trial and it’s amazing to be able to share these moments in our team’s country,” Affini said. “I guess it was even more special for our Dutch guys, but it also is for me. To be the leader of a general classification here is really an amazing feeling. It’s crazy to be able to be the leader.”

The top six riders in the general classification are from Jumbo-Visma. Sam Oomen was behind Affini, with Roglic just behind.

It was the final stage before the Vuelta returns to Spain after starting in the Netherlands.

Michael Woods, a two-time stage winner at the Vuelta and one of the title challengers this year, had to abandon the race after a crash. Richard Carapaz also crashed but was able to continue.

Bennett hadn’t won a Grand Tour stage since the 2020 Vuelta before ending his winless streak in Utrecht on Saturday.

“It’s quite nice to make it happen two days in a row,” said Bennett, who now has 10 Grand Tour stage victories, five of them at the Vuelta.

After a 193-kilometer (120-mile) loop around Breda on Sunday, Bennett was dominant on the final meters to take the victory ahead of Mads Pedersen and Dan McLay. Pedersen had also come in second on Saturday.

“It was quite hard because I think a lot of people were fighting for our wheel,” Bennett said. “People started to go up on the inside and squeeze me off. It was quite a hard fight. A big thank you for the boys, they worked all day, looked after me the whole stage.”

Roglic, trying to win an unprecedented fourth straight Vuelta title, finished comfortably in the peloton to stay near the front. Robert Gesink and Mike Teunissen also wore the red jersey for team Jumbo-Visma.

Riders will get their first rest day on Monday before the race resumes in the Basque Country in northern Spain.

Must inform voters about financial implications of freebies: Ashima Goyal