Biden awards Medal of Honor to 4 for Vietnam War heroism 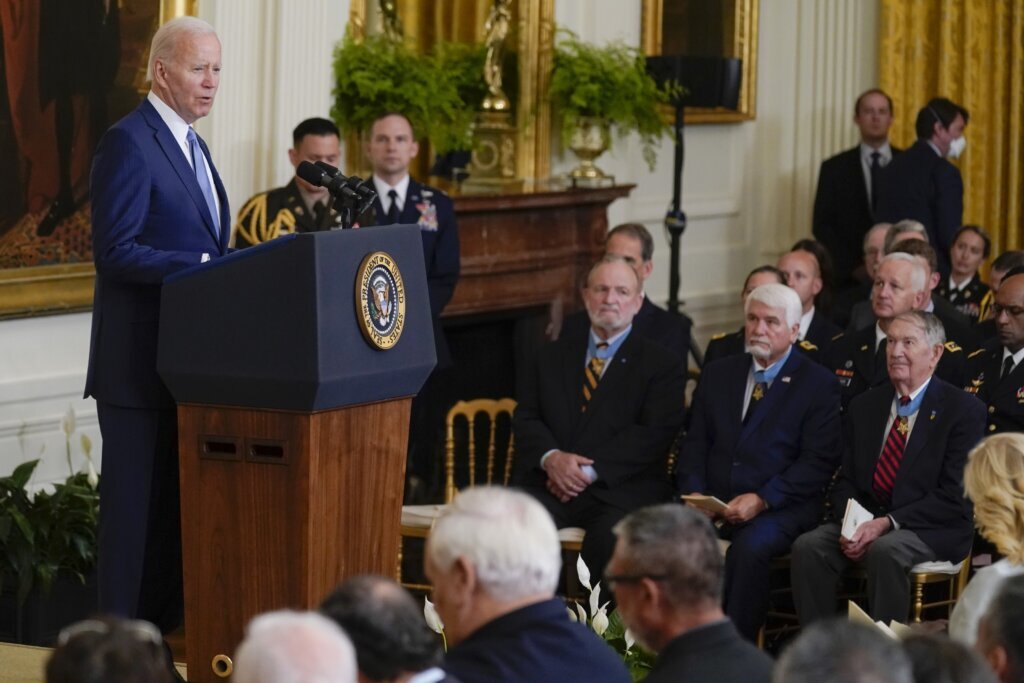 President Joe Biden on Tuesday bestowed the nation’s highest military honor to four Army soldiers for heroism that he said rose above and beyond the call of duty during the Vietnam War.

WASHINGTON (AP) — President Joe Biden on Tuesday bestowed the nation’s highest military honor to four Army soldiers for heroism during the Vietnam War, bravery that he said had not diminished even with the passage of time.

“It’s just astounding when you hear what each of them have done,” he said. “They went far above and beyond the call of duty. It’s a phrase always used but … it takes on life when you see these men.”

Addressing the three living soldiers and relatives of Kaneshiro, who is deceased, the president said, “I’m proud to finally award our highest military recognition, the Medal of Honor, to each of you.”

Biden noted that more than 50 years had passed “since the jungles of Vietnam where, as young men, these soldiers first proved their mettle. But time has not diminished their astonishing bravery, their selflessness in putting the lives of others ahead of their own and the gratitude that we as a nation owe them.”

Kaneshiro, killed in action by hostile gunfire in Vietnam in 1967, received his honor posthumously for a Dec. 1, 1966 raid where his unit came under fire by North Vietnamese troops. His actions were credited with helping his unit withdraw from the village where they were fighting. Kaneshiro was born and raised in Hawaii, a son of Japanese immigrants.

Birdwell was honored for actions helping to head off an assault and evacuate wounded at Tan Son Nhut Airbase near Saigon on Jan. 31, 1968, despite injuries to his torso and face, during an opening salvo in what is known as the Tet Offensive, an especially bloody period of the war.

Birdwell, a member of the Cherokee Nation and a lawyer in Oklahoma City, had received a Silver Star for his actions. Biden said it took Birdwell’s commanding officer decades to realize that Birdwell had not received the proper recognition and took steps, even in retirement, to “make this day possible.”

“At long last, long last, your story is being honored as it should have been always,” Biden told Birdwell.

Fujii received a Medal of Honor for actions over four days in February 1971 treating wounded and directing air strikes against enemy positions after his air ambulance was forced to crash land.

Duffy was recognized for leading troops who came under ambush after their commander was killed in action, repelling attackers and evacuating wounded, despite his own injuries. Duffy went on to become an author and once was nominated for a Pulitzer Prize for poetry.

“He is the definition of a warrior poet,” Biden said.

Eugene Bareman on Alexander Volkanovski: ‘If that’s not the best pound-for-pound fighter in the world, then I don’t know who is’

The upper house of Russian parliament has ratified…