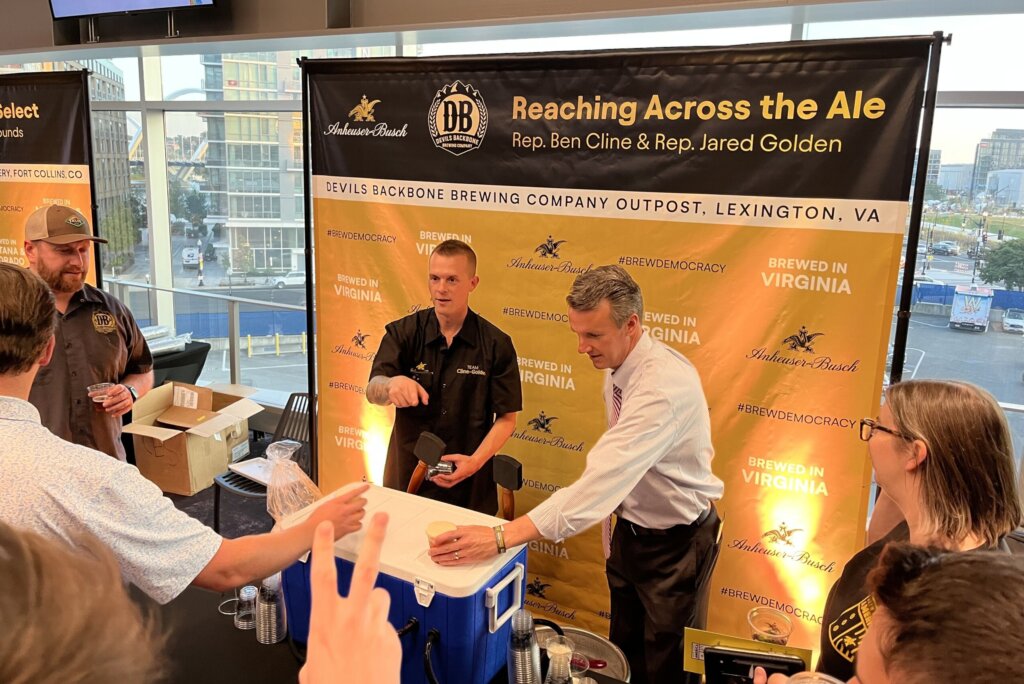 Congressional Republicans and Democrats briefly set aside their differences this week at Nationals Park, coming together for a bipartisan beer competition that lawmakers agree was a relaxing respite from the rhetoric heading into the midterm elections.

GOP and Democratic lawmakers stood side-by-side Thursday night for the fifth year of “Brew Across America,” sponsored by Anheuser-Busch, doling out samples of beer with names like “Reaching Across the Ale,” which they collaborated on together.

The past two years, the congressional brewing competition has required that each team include a Republican and Democratic lawmaker, working together to create a signature beer.

“I guarantee you there isn’t a congressman or a senator here who’s talking policy,” said Sen. Jon Tester, D-MT, as a crowd milled around in the Champions Club at Nats Park. “They’re talking beer. And there can’t be anything better than that. So it helps build relationships.”

Tester has a family farm in Montana that provided some of the barley for his beer. He collaborated with Sen. Mike Rounds, D-SD, to create their “Seventeen Finger Select” beer.

Tester said they came up with the name because Rounds has 10 fingers and Tester has seven, due to an accident when he was younger involving a meat grinder. Their beer was judged the top brew by a group of judges including several Capitol Hill reporters, taking home the 2022 Brew Democracy Cup.

Tester and other lawmakers lamented that members of both parties spend very little casual time with each other, which makes it harder to forge relationships that overcome political differences.

“We don’t get opportunities like this. Everybody goes home on weekends nowadays,” Tester said.

Rep. Tony Gonzales, R-TX, worked with Rep. Chris Pappas, D-NH, on their beer, Sugarhouse Ale: “Well, at least one day, we’re having a beer together after work. We should find more opportunities to do that,” Pappas said.

“It’s a shame more lawmakers don’t get together,” Gonzales said, joking, “Because D.C. makes you drink. I don’t care what side (or) party you’re on. What better way, then to build a beer together.”

Rep. Ben Cline, R-VA, noted that his beer partner, Rep. Jared Golden, D-ME, has worked with him on legislation. Together, they developed the “Reaching Across the Ale” beer.

“Jared and I sponsor bills together, we’re in the Problem Solvers Caucus together, it’s only natural that we’re going to brew a beer together,” Cline said, as they handed out samples.

Many congressional observers have noted that lawmakers of both parties rarely socialize anymore. And that’s made it more difficult to come together on legislation. Tester said getting together over a beer, whether it’s in Washington or a town in Montana, is something that shouldn’t be underestimated.

Asked about the need to meet with members of the other party, he said: “It’s critically important because it helps you build trust. And you get things done when you trust one another.”