BOXING is the only sport that could stumble accidentally into the two biggest possible events when they make almost no sense.

These two have won their group stages and knockout matches and reached the final of the heavyweight World Cup.

But in the ludicrous way this sport operates, the Gypsy King has put the undisputed decider with Usyk on ice and thrown Anthony Joshua a voluntary shot at his crown – despite him suffering two consecutive defeats.

You have to go back to 1951 and underrated legend Jersey Joe Walcott for the last time a heavyweight got a crack at the title off of back-to-back defeats.

But the WBC have parachuted AJ into their rankings at 6 to lubricate the greasy game even more, so their champ can do the business. 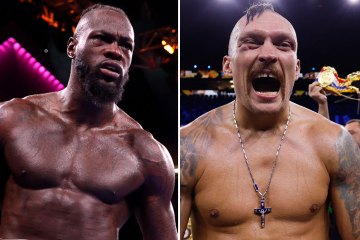 But it’s not exactly great business either.

Just 18 months ago – after AJ had regained the three belts from Andy Ruiz in a Riyadh rematch and battered Kubrat Pulev – Saudi Arabia were ready to help make the Fury vs Joshua showdown a £200m scorcher.

And the Wembley rematch would have broken all British records, taking their potential earnings for a double-header close to £500m.

Now AJ has twice been dominated by Usyk, it’s pencilled in for Cardiff on a damp December night where they might make £5m on the gate and nick £60m in PPV buys – as long as they smash the UK record.

The truth is both warring teams think the other side is bluffing.

AJ Boxing reckon Fury is cunningly trying to use their man to rush Usyk back into a four-belt decider when he has not yet recovered from outpointing Joshua on August 20 or seeing his beloved nation suffer Russia’s invasion.

Team Fury fancy AJ’s broadcast backers and big-money sponsors will eventually baulk at the idea of their man suffering a hat-trick of humbling losses on the bounce.

It’s a high stakes game of chicken and even deadly serious Usyk is now having a crack at it.

Instead of believing in or sulking about AJ and Fury’s potential clash, Usyk has casually upped the ante and revealed he’s targeting a fight with former WBC ruler Deontay Wilder.

The same man Fury outsmarted once and pummelled twice in a brilliant but one-sided trilogy.

Wilder will at least have a comeback win on his record to end his painful baron run when he pummells Robert Helenius on October 15.

So in a couple of months we could have two heavyweight world challengers with a combined recent record of 1 win and 4 losses.

We should get AJ vs Wilder as a semi-final shootout to decide who faces the winner.

Finally throw Errol Spence vs Terence Crawford on to shut us all up for once, too.

But this is cruel and self-sabotaging modern boxing, where our heroes fight as many times in a year as KSI does in a night, Floyd Mayweather vs Manny Pacquiao happens almost a decade too late and Lennox Lewis vs Riddick Bowe doesn’t happen at all.

So let’s put away our calculators and up-to-date rankings and sanctioning body guidelines.

And blindly hope that the most backwards sport on the curriculum bluffs its way arse-about-face into a couple of unexpected, unlikely and unbelievable bouts.

But don’t be surprised if our Christmas stocking is actually stuffed with Fury vs Chisora 3 and Anthony Joshua vs Otto Wallin.

Because in boxing we seem to have nothing to fear but hope itself.

Charles’ history with US presidents: He’s met 10 of past 14