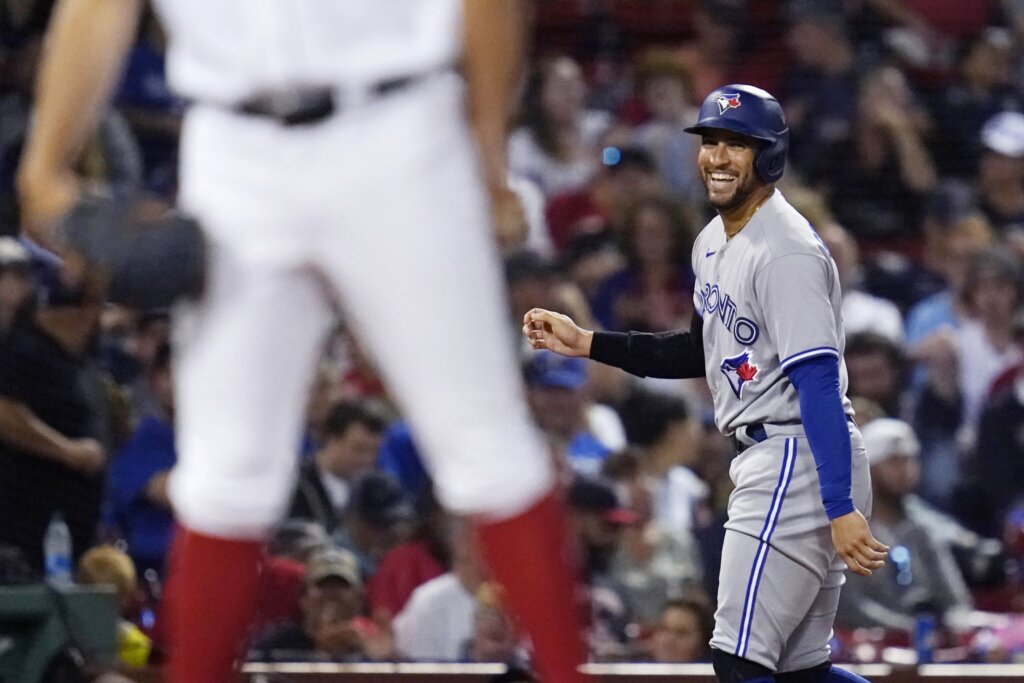 BOSTON (AP) — Jackie Bradley Jr. doubled and scored to key an eight-run inning against his former team and the…

BOSTON (AP) — Jackie Bradley Jr. doubled and scored to key an eight-run inning against his former team and the Toronto Blue Jays rolled to a 9-3 victory over the Boston Red Sox on Tuesday night.

George Springer had two hits and drove in three runs in his return to the lineup at designated hitter. The Blue Jays (66-55) notched their fifth win in six outings to keep pace with the Tampa Bay Rays in the AL wild-card standings.

Ross Stripling (6-3) followed up his flirtation with a perfect game last week with another efficient night, yielding one run off six hits and striking out six over six innings.

It rained throughout the afternoon in Boston, and lingering storms in the area delayed the game’s start time by an hour.

It didn’t quiet the bats of the Blue Jays, who entered the day leading the AL with a .262 team batting average.

Things fell apart quickly for Boston after that.

Making his first appearance at Fenway Park as a visiting player, Bradley doubled hard off the left field wall to open the third. Boston left fielder Tommy Pham was hurt on the play after his leaping attempt to make a catch resulted in him crashing into the wall and exiting with back spasms.

Winckowski got back-to-back ground outs, but Lourdes Gurriel Jr. tied the game with an RBI double.

Alejandro Kirk walked and Teoscar Hernández doubled to make it 2-1. Bo Bichette singled to load the bases and Winckowski walked Matt Chapman before being pulled in favor of reliever Austin Davis.

Cavan Biggio kept the rally going with an RBI single. Bradley Jr. then got aboard again via a walk. Davis looked like he was going to get out of the inning when Springer lifted a short fly ball to right field. But Rob Refsnyder whiffed on his attempt at a sliding catch and the bases emptied on Springer’s triple to make it 8-1.

Red Sox: SS Xander Bogaerts was replaced in the seventh inning after experiencing mid-back spasms. … Following Pham’s injury, Refsnyder entered the game at right field and Alex Verdugo moved to left. Pham is day to day. … RHP Nathan Eovaldi was placed on the 15-day injured list with right shoulder inflammation. Manager Alex Cora said he expects him to return before the season ends. …. 1B Eric Hosmer was placed on the 10-day IL with lower back inflammation. … Cora said second baseman Trevor story would begin a rehab assignment with the Double-A Portland Sea Dogs Wednesday.

Bradley received a warm reception during a video tribute highlighting the outfielder’s time in Boston, which spanned eight-plus seasons over two stints.

Bradley was the MVP of the 2018 AL Championship Series and helped catapult the Red Sox to a World Series win that season. He tipped his cap to the crowd in his first appearance at Fenway Park as a visiting player.

Bradley agreed to a $24 million, two-year contract with Milwaukee in March 2021 and played one season for the Brewers. He was traded to Boston in December and played a second stint with the Red Sox. But early season struggles led to him being released by Boston earlier this month. The Blue Jays signed him on Aug. 9.

Red Sox: Cora hasn’t settled on a starter yet but said it would likely be a combination of RHP Brayan Bello and LHP Rich Hill.