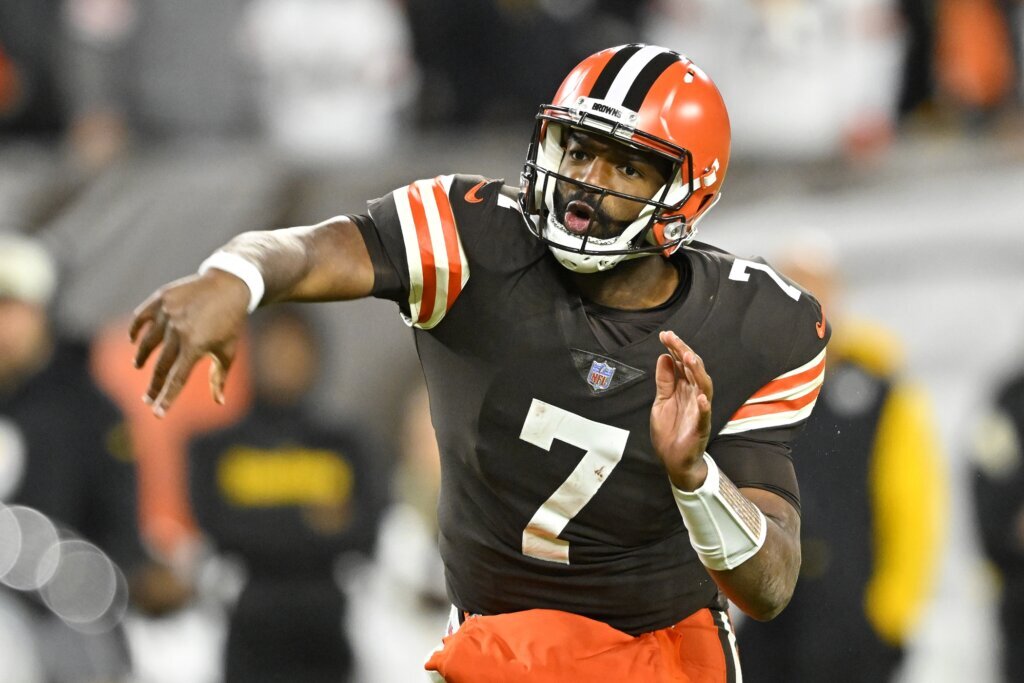 The Browns (2-1) built a nine-point lead early in the fourth on Chubb’s 1-yard run and then held on for dear life.

The Steelers (1-2) pulled within 23-17 on Chris Boswell’s 34-yard field goal with 1:48 left before Pittsburgh attempted an onside kick. But unlike in Sunday’s 31-30 loss, when the New York Jets overcame a 13-point deficit in the final 1:55 helped by a recovery, the Browns batted the ball out of bounds.

Cleveland fans could finally exhale when cornerback Denzel Ward fell on a Steelers fumble in the end zone on the final play for a meaningless touchdown.

Brissett connected with Amari Cooper and David Njoku for TDs, and finished 21 of 31 for 220 yards. The 29-year-old had his second straight solid game as he fills in while Deshaun Watson serves an 11-game suspension.

Chubb had 113 yards and pushed and twisted across the goal line on fourth-and-goal with 9:29 left to put the Browns ahead 23-14.

Mitch Trubisky and the Steelers’ stagnant offense showed signs of life in the first half, but bogged down after halftime, punting on their first three possessions while gaining just 54 yards.

The win smoothed over a rough few days for Cleveland.

Sunday’s debacle was followed by Myles Garrett criticizing fans for booing the Browns as they left the field, and a fan was arrested on charges he threw a plastic bottle in the direction of owner Jimmy Haslam on the sideline.

But there was little drama this time, just a win over their hated neighbors from Pennsylvania.

Brissett’s 7-yard TD pass to Njoku put the Browns up 13-7 with 8:58 left before halftime. But for the second straight week York missed an extra point.

Trubisky led the Steelers on a 75-yard scoring drive — 51 yards coming on the ground — before the QB rolled right and scored from the 1. Boswell’s PAT put Pittsburgh ahead 14-13.

Steelers rookie receiver George Pickens expressed frustration about not getting the ball during a loss to New England last week, saying he was open “90% of the time.” He wasn’t joking, either.

Trubisky finally hit him with a long ball, but it took a spectacular, one-handed catch by Pickens for a 36-yard gain.

Garrett failed to record a sack and remains just shy of Clay Matthews’ team record of 62. The Browns’ All-Pro defensive end was double-teamed, chipped and was credited with just assisted tackles.

Steelers: CB Ahkello Witherspoon (right hamstring) limped off in the third quarter and didn’t come back.

Browns: Walker was carted off with his left leg immobilized in an air cast. Walker appeared to get hurt when he was bent back awkwardly trying to fight off a block. … Owusu-Koramoah (quadriceps) didn’t return. … DT Taven Bryan (hamstring) also was hurt in the third. … S Ronnie Harrison injured his hamstring during warmups and didn’t play.

Tata Steel rallies 4%, shares of subsidiaries fall up to 9% on merger plan