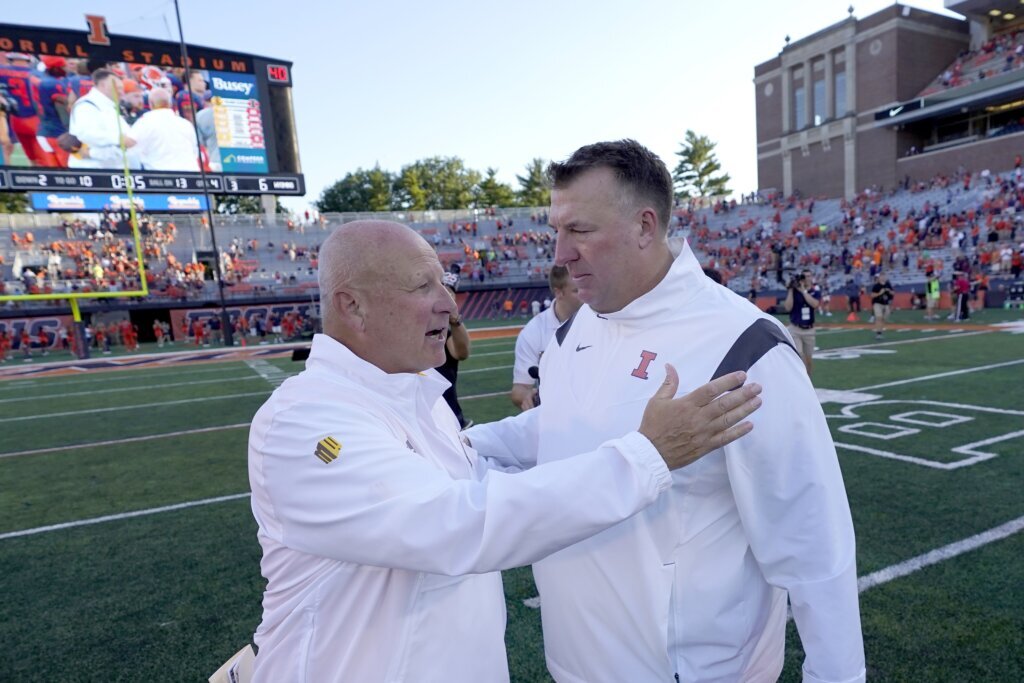 CHAMPAIGN, Ill. (AP) — Chase Brown scored three touchdowns and rushed for 151 yards and Tommy DeVito completed 27 of 37 passes for 192 yards and two touchdowns in his debut as Illinois breezed past Wyoming 38-6 in a season-opener on Saturday.

Only 41 seconds elapsed before Brown found his way into the end zone, latching onto a 14-yard pass from DeVito to put Illinois in front.

Brown surpassed 2,000 career rushing yards — including his freshman season at Western Michigan — on an 18-yard run in the second quarter. Brown followed with an 11-yard TD run and kicker Caleb Griffin connected from 27 yards out to give Illinois a 17-3 halftime lead.

The Cowboys converted just 1 of 12 third-down attempts, while the Illini were successful on 7 of 16.

John Hoyland had field goals of 22 yards and 46 yards for the Cowboys’ lone scores.

Illinois upped its lead to 31-6 early in the fourth quarter when Brown scored on a 5-yard run.

DeVito looked confident in his debut, even if there is room for improvement, connecting with a dozen different receivers. If Illinois gets steady quarterback play, it could fair well in the Big Ten West thanks to its stingy defense.

The Cowboys look a few steps behind 2021 after losing much of their top talent to the portal.

Illinois: The Illini open Big Ten Conference play on Friday night when they travel to Indiana to take on the Hoosiers.

Wyoming: The Cowboys will host Tulsa next Saturday in a nonconference match-up.